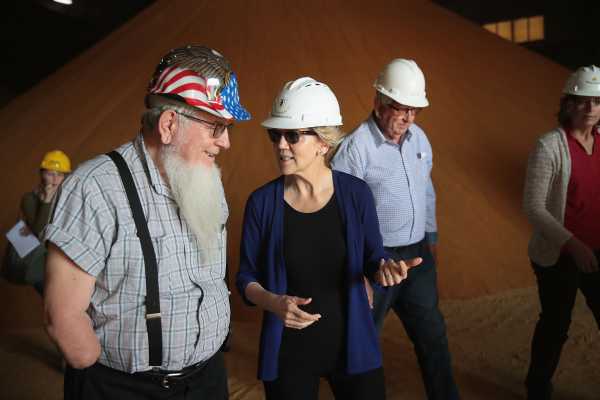 Massachusetts Sen. Elizabeth Warren has released not one, but three climate change plans as part of her campaign for president. So far.

Since April, she has outlined an agenda to counter growing greenhouse gas emissions and rising average temperatures through policies for public lands, the military, and US manufacturing. And more are in the works, according to her campaign.

Her piecemeal approach is distinct from the other Democratic candidates who’ve released climate proposals as a comprehensive bundle. Chief among them is Washington Gov. Jay Inslee, who has made climate change the raison d’être for his run.

Warren, isn’t making climate change the centerpiece of her agenda nor placing it in a “environmental” silo. Instead, she is using different parts of her agenda address climate. She is making the policy case that climate change is a national security concern, an economic threat and opportunity, and the consequence of a violation of public trust.

That’s because Warren doesn’t see climate change itself as the central problem; rather the problem is money in politics. “The reason the United States is where it is on climate is corruption,” Chris Hayden, a spokesperson for the Warren campaign, told Vox. “We need to rein in the economic and political power of Big Oil to get serious about addressing climate change – which is why the first thing Elizabeth would do as President is pass her anti-corruption bill which would end lobbying as we know it.”

The open questions then are whether Warren’s strategy will make her agenda more palatable to voters, and if her policies would do enough to avert the most dangerous risks from climate change. Although Democratic National Committee has ruled out holding a climate change-specific debate, the issue is likely come up in the first round of Democratic presidential debates on June 26 and 27 in Miami, a city struggling with sea level rise. Let’s take a closer look.

Warren has laid out her climate agenda to date in a series of Medium posts. The first, published in April, deals with public lands. She observed that almost a quarter of US greenhouse gas emissions come from fossil fuels — oil, gas, and coal — extracted from territory administered by the federal government.

The profits from extracting these fuels mainly flow into powerful private hands, but the negative consequences — air pollution, degraded ecosystems, greenhouse gases — are borne by the public. “We must not allow corporations to pillage our public lands and leave taxpayers to clean up the mess,” she wrote.

On her first day as president, Warren would declare a moratorium on all new fossil fuel leases on public lands. “[T]hat’s pretty significant — putting all our federal lands, it’s nearly a quarter of our land mass, on the side of helping the climate instead of being a source of more carbon in the air,” Warren told Vox earlier this month. She would also reinstate an Obama-era rule that restricted the emissions of methane, a potent greenhouse gas, from existing drilling and mining sites.

At the same time, Warren’s proposal calls from generating 10 percent of US electricity from renewable energy on public lands and waters through expediting permitting and approvals for projects. The royalties from these generators would then be used to further wean the country off fossil fuels.

Warren’s second climate policy pillar focuses on the US military, the single-largest greenhouse gas-emitting institution in the world. Its massive footprint with bases spread out across more than 70 countries devours huge amounts of fuel and electricity to move personnel and materiel. US tanks, aircraft, ships, and power generators together emitted 59 million metric tons of carbon dioxide in 2017. If it were a country, the US military would rank 55th in greenhouse gas emissions.

But climate change also threatens the armed forces. Extreme weather has already damaged major military installations and many more are at risk from rising sea levels. The massive population movements expected in the wake of looming droughts, severe heat, and storms exacerbated by climate change create could lay the groundwork for future conflict. That’s why military planners have described climate change as a “threat multiplier.”

To address these concerns, Warren introduced the Defense Climate Resiliency and Readiness Act in Congress. “It starts with an ambitious goal: consistent with the objectives of the Green New Deal, the Pentagon should achieve net zero carbon emissions for all its non-combat bases and infrastructure by 2030,” Warren wrote.

Warren also said that military contractors should also be held to these climate targets and that the Department of Defense should prioritize threats from climate change. The proposal also call for more clean energy research, infrastructure upgrades, and an audit of climate vulnerability for all military bases.

Her latest climate policy released earlier this month centers on “economic patriotism.” This uses climate change to motivate a new economic development push. It puts meat on the bones of the “just transition” idea outlined in the Green New Deal and it’s the longest of Warren’s climate proposals (Vox’s Matt Yglesias explained the proposal in more detail).

The idea is that a sharp turn away from fossil fuels and toward clean energy demands coordination across the economy. The transition requires not just cushioning the blow for fossil fuel workers who would lose their jobs, but creating a massive surge in demand for clean energy jobs.

In Warren’s proposal, there’s a Green Industrial Mobilization mandating $1.5 trillion in federal procurement for US-made low-carbon technology, a Green Marshall Plan to help foreign countries buy US clean energy technologies, and a Green Apollo Program to invest $400 billion in energy research and development over a decade. So her proposal doesn’t just zero out emissions in the United States; it aims to drive down emissions around the world.

“According to an independent economic analysis from Moody’s, my plan will meaningfully increase economic growth and create more than a million new jobs,” Warren wrote. “It will help reverse the massive manufacturing job losses of the last two decades that have hurt middle-class families and hit Black workers and communities hardest — all while allowing America to lead the global effort to address climate change.”

One place where Warren’s climate policies stand out from those of other Democratic presidential hopefuls is her frankness in how she intends to pay for them. Rather than just tax credits and working to “mobilize” private investment (as some other candidates have suggested), Warren is going back to the old-fashioned tactic of taxing wealth and corporate profits. “Her Green Manufacturing plan — just one part of her strategy to tackle climate change — is paid for by Elizabeth’s Real Corporate Profits Tax , ending federal oil and gas subsidies, and closing corporate tax loopholes that promote moving good jobs overseas,” Hayden said.

So Warren has a more tangible and snappier answer to the inevitable pay-for question that follows just about any climate proposal.

Environmentalists give Warren’s policies points for their depth, but want to push her further

Taken together, Warren’s climate policies to date are still not as far-reaching as those put out by Inslee, who has already published three massive proposals and says more are coming. His climate change agenda to date encompasses agriculture, financing, foreign policy, transportation, energy efficiency, and education.

But some environmental groups are nonetheless impressed with Warren. “There’s no question that the climate crisis can and will affect so many aspects of our economy, our society, and our lives,” said Sierra Club National Political Director Ariel Hayes in an email. “Senator Warren’s ambitious and strong plans recognize that reality thoroughly and propose solutions accordingly.”

Greenpeace upgraded its rating of Warren in its climate scorecard this week for presidential contenders in light of her green manufacturing proposal. It has her tied with Vermont Sen. Bernie Sanders and behind Inslee and New Jersey Sen. Cory Booker.

“We think that if she could put out a more comprehensive plan, she’d be able to touch on a lot of areas really in her wheelhouse,” said Tim Donaghy, a senior researcher with Greenpeace USA. “In particular one of the things we’re focusing on is trying to push the candidates to do more on fossil fuel supply.”

Donaghy pointed out that while Warren’s public lands plan stops new fossil fuel development, limiting planetary warming to 1.5 degrees Celsius this century, the more ambitious goal under the Paris climate agreement, requires aggressively clamping down on existing fossil fuel production. Without a restricting the current output of fossil fuels, a clean energy program in the United States could simply end up leading to more fossil fuel exports, according to Donaghy.

“I think what’s really good here is that climate change is not siloed into one bucket,“ Light said. Given that the impacts of climate change reach far-reaching impacts on health, the economy, social justice and national security, it makes sense to bring it up those contexts. “I think that it’s important enough that you would have to bake it into how you’re think about public lands, a jobs strategy, or security,” Light said.

There’s also plenty of time between now and the first primary ballots, and Warren is still coming out with more proposals, so she could continue to fill in some of the gaps between her and Inslee.

Democrats are alarmed about climate change, but Warren’s strategy could help her sway voters in a general election

Polls show that Democrats are deeply concerned about climate change. One recent CNN poll found that climate change was the number one issue for Democratic primary voters.

Warren’s strategy of framing climate change as an economic issue and a national security concern could help keep it front and center during another economic downturn or escalating international conflict. It could also be her opening to more climate-skeptical general election voters who are not experiencing rising sea levels or extreme weather first-hand.

“I think that it’s absolutely unquestionable that whoever becomes the next president has to be able to talk about all the issues that Americans are concerned about,” Light said. “They must appeal to states where they don’t see climate change in front of them.”

The true test of this will be at the ballot box, but we may get a sense of how well Warren’s approach stands up in the first round of Democratic presidential debates beginning June 26. Warren will share the stage with Inslee on Wednesday night.