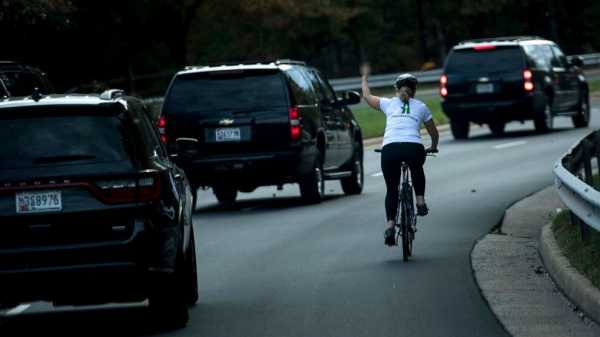 A Virginia cyclist who flipped off President Donald Trump has won a seat on the county board of supervisors that oversees his golf club.

Juli Briskman, a Democrat, lost her job after a photographer took a picture of her raising her middle finger to Trump’s presidential motorcade while riding her bike in 2017.

“I was frustrated,” Briskman told ABC News Wednesday. “(Trump) had called folks down in Charlottesville good people on both sides. He had stripped funding away from Obamacare advertising. Puerto Rico was being blamed for their own demise at a hurricane… What we had feared most was actually happening and I just wanted to tell (the president) what I was thinking.”

Although Briskman’s face is obscured in the photo, she decided to tell her employer, a government contracting firm named Akima, that she featured in the picture. 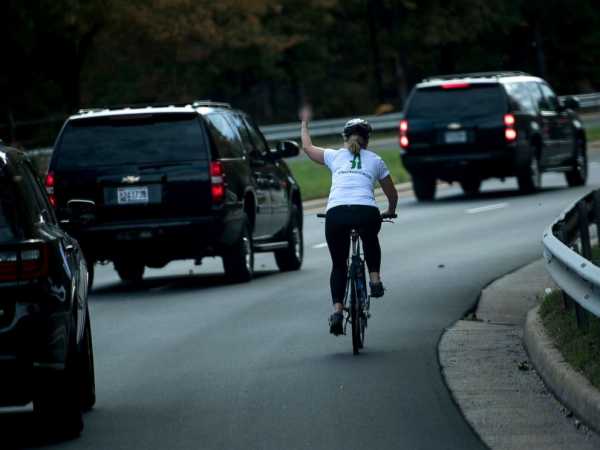 “I told them because the press was actually calling me already,” she said, “A place where I was working part time was getting threatening emails and threats of boycotting their business because I was an employee … So, I just wanted to let (Akima) know that that might be coming down the pike.”

However, Akima fired her. According to Briskman, they dismissed her for violating their social media policy. The northern Virginia resident later filed a lawsuit against her former employer accusing them of wrongful termination for violating her First Amendment rights.

According to Fairfax Circuit Court documents, lawyers representing Akima countered Briskman’s claim saying there was no free speech exception to Virginia’s labor laws, which frequently allow firms to fire employees without saying the reason why. While the judge dismissed her wrongful termination lawsuit, Briskman settled a severance agreement with Akima outside of court.

Despite the legal battle, the experience motivated Briskman to engage in increased political activism. “After I was fired, I was like, ‘Alright, I need to do something about this Trump administration,'” she told ABC News.

Briskman decided to work on Jennifer Wexton’s successful 2018 campaign for the U.S. House of Representatives in Virginia.

Almost a year after flipping off the presidential motorcade, Briskman announced her candidacy for Loudoun County Board of Supervisors last September. “Today, I am filing my organizational papers in a bid for local office in Loudoun County, Va. Loudoun deserves transparency in government, fully funded schools & smarter solutions to growth,” she wrote in a tweet declaring her candidacy, “It’s time for a change.”

“I think (the photo) definitely helped. Publicity always helps the campaign,” she said, “I don’t know that I needed a bunch of help with name recognition in my small district. But, you know, I’m sure that helped.”

On Tuesday, the single mother of two found a new job on the Loudoun County Board of Supervisors after defeating incumbent Republican Suzanne M. Volpe by almost nine points.

“It’s fantastically ironic that I represent a district that contains Trump National Golf Course,” Briskman said. Although she will be on the supervisor of the area that includes the president’s club, it is unlikely the board will have to deal with golf course unless a zoning issue arises. 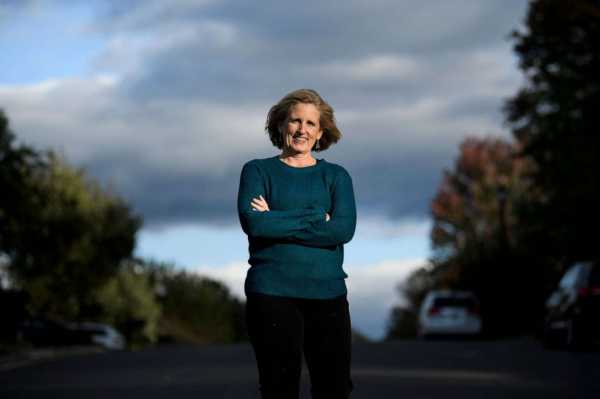 Juli Briskman, who was fired after giving US President Donald Trump’s motorcade the middle finger while cycling and is running for a seat on the Loudoun County Board of Supervisors, is shown Oct. 17, 2019, in Sterling, Virginia.

Virginia Democrats’ Tuesday victories mark the first time since 1993 that the party controls both chambers of the state legislature and the governor’s mansion. Democratic Governor Ralph Northam told a crowd of supporters in Richmond Tuesday night, “I’m here to officially declare today, November 5, 2019, that Virginia is officially blue.”

“Algonkian District and Loudoun County as a whole, and actually the entire state of Virginia has soundly rejected the Trump agenda,” Briskman said, “We are saying it stops here and we have to set the tone, I believe, for the nation in 2020.”