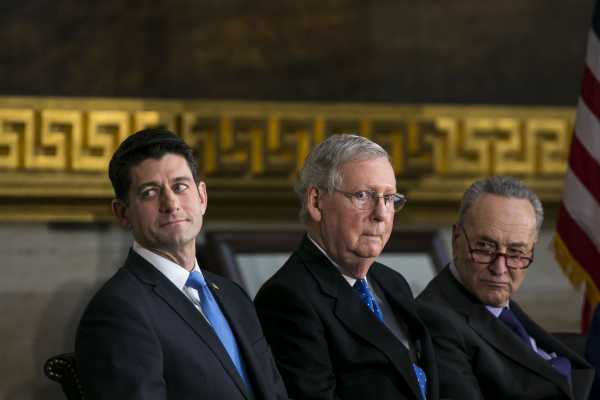 Congress only has three working days between today and the next shutdown deadline on February 8 — when Senate Democrats hope to reach an agreement on immigration — to cobble together a spending deal to keep the government open.

Congressional Republicans and Democrats will spend the greater part of the next two weeks out of Washington on retreat: the annual meetings that give parties time to strategize their legislative priorities for the year ahead.

Republicans are heading off to Greenbrier resort in West Virginia today for three days. Next week, Democrats are scheduled to be in Cambridge, Maryland, for three days starting February 7, in direct conflict with the spending deadline.

Because members say they need at least a month to write a spending bill, Congress is expected to pass yet another short-term spending agreement on February 8 — but they still have a lot of difficult decisions to make. There is still uncertainty around whether that agreement will come with a deal on budget caps — the upper spending limit for military and domestic programs — which Democrats and Republicans have to agree on. And there’s already some frustration among Democratic and Republican ranks about having to vote for another short-term spending bill.

Democrats have already made peace with the likelihood of cutting their retreat short, particularly because the future of the Deferred Action for Childhood Arrivals program, which the Trump administration has promised to fully end by March 5, hangs in the balance.

Democrats agreed to vote to reopen the government after a three-day shutdown last week with the assurance of good-faith immigration negotiations in the interim, and a promise from Senate Mitch McConnell to hold an open-floor debate on immigration after February 8 if a bipartisan agreement is not reached.

With only four days with both party’s legislators in the building, Sen. Dick Durbin (D-IL), the lead Democratic negotiator on immigration and the Senate minority whip, said he “hopes” meetings will continue on DACA this week and next.

Last week, Congress only bought itself a little more time. The idea was they would cobble together a deal on immigration and more permanent government spending in the weeks ahead — but the actual legislative calendar shrank that window for negotiation even more.

And it doesn’t look like there’s been much tangible progress in negotiations.

Last week, Trump’s administration briefed Republican congressional aides with an immigration proposal that called for a path to citizenship for 1.8 million undocumented immigrants who came to the country as children, $25 billion to fund a southern border wall, substantial curtailing of family immigration, and elimination of the diversity visa lottery program, which would gut the legal immigration system.

The proposal was largely interpreted as a White House alternative to the one bipartisan proposal by Durbin and Sen. Lindsey Graham (R-SC) on immigration that Trump has already shot down.

Both Republican leaders in the House and Senate supported the clarity offered by the White House proposal but made no commitments to the actual policy. By Tuesday, House Republicans were still discussing the partisan immigration proposal by Rep. Bob Goodlatte (R-VA), which is unlikely to garner any Democratic support. And already some Republicans in the Senate have expressed concern with the proposal’s serious cuts to legal immigration.

The shutdown also brought together a larger group of bipartisan negotiators — roughly 30 senators who’ve named themselves the “Common Sense Coalition,” who are intent on moving immigration talks forward. Meanwhile, a team of Democratic and Republican leadership deputies that have been dubbed the “No. 2s,” consisting of Durbin again, as well as Minority Whip Rep. Steny Hoyer (D-MD), Majority Whip Sen. John Cornyn (R-TX), and Majority Leader Rep. Kevin McCarthy (R-CA), have also been negotiating.

In short, the state of immigration negotiations in Congress remains decentralized and disjointed.

For weeks conservative hardliners have commandeered immigration negotiations. To win enough House Republican votes for the short-term spending bill last week, House Speaker Paul Ryan promised the Freedom Caucus, the lower chamber’s group of ultraconservatives, that Republican leadership would whip votes for a conservative Goodlatte immigration bill. Conservatives continue to say there is a path to compromise, but they have shown no willingness to work with Democrats thus far.

On Tuesday, Durbin said lawmakers weren’t any closer to reaching an immigration deal than they were a week ago.

The underlying spending fight is still up in the air

On top of immigration, Congress still has to strike a permanent spending deal for 2018.

It all goes back to 2011 when an Obama-era impasse over the debt ceiling brought the American economy to near calamity. The ultimate result was the 2013 sequester, which set into law across-the-board budget cuts and established caps that would amount to $1.2 trillion in cuts over the next 10 years.

Since the sequester, there have been two bipartisan deals to raise the caps by billions of dollars. The first in 2013 was forged between Rep. Paul Ryan and Sen. Patty Murray; a second was agreed on in 2015. There’s no question that Trump wants Congress to do that again.

Last year, Trump’s budget called for $603 billion in defense funding, and both the Senate and House separately proposed even higher figures.

Congress has repeatedly voted to raise the budget caps and give sequester relief, but those adjustments, which extended through fiscal year 2017, have now expired. In 2018, the sequester budget caps max out defense spending at $549 billion and non-defense discretionary funding at $516 billion, far less than what both Republicans and Democrats would like to spend.

Democrats have established a guiding principle in spending cap negotiations: If Republicans want more funding for defense, then Democrats want a one-for-one increase in non-defense funding. This time, however, that agreement hit a snag.

Reaching a budget cap deal is a high priority for defense hawks in Congress, who say short-term spending deals hobble the military — preventing them from being able to adequately plan resources. Republicans in the House are trying to move forward a defense spending bill without addressing domestic spending, which is a “nonstarter” for most Democrats.

Because appropriators need these topline numbers to begin putting together a trillion-dollar spending bill that would fund the government through next September, the lack of compromise has put more permanent spending bills on hold.