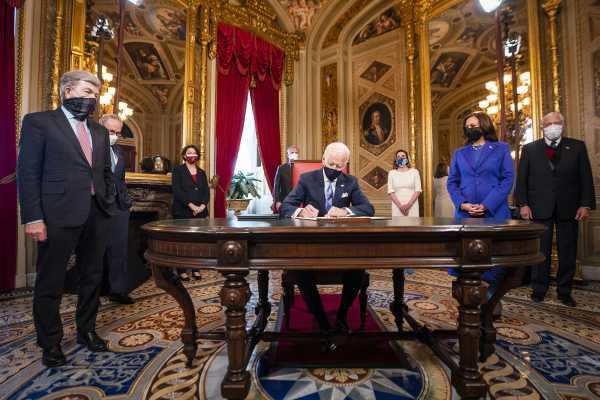 With the stroke of a pen, Biden will be able to halt some of Trump’s most high-profile and controversial immigration policies: the travel ban, construction of the southern border wall, and his attempt to end protections for young undocumented immigrants through the Deferred Action for Childhood Arrivals program.

There’s a large human impact in rescinding those policies. About 41,000 people have been denied visas as a result of the travel ban. Almost 700,000 currently benefit from DACA. These actions mark the beginning of a transition toward what Biden promises will be a more welcoming era for immigrants in the US.

But Wednesday’s actions are, in some ways, the easy part. From here on out, the real work of undoing Trump’s complex web of regulations and policy changes begins, presenting an early test of Biden’s commitment to prioritizing immigration.

Trump built impediments in Central America, at the border, in detention centers, and in immigration courts that have made obtaining asylum nearly impossible for people fleeing violence in their home countries. He vastly expanded immigration detention, rapidly returning migrants to Mexico, prosecuting every immigrant caught crossing the border without authorization, and separating more than 5,500 immigrant families. And he waged a quiet and effective campaign to reduce legal immigration, using the coronavirus pandemic as an excuse to reject tens of thousands of visas and green cards.

The task before Biden is immense. He will be expected not just to revert to the Obama-era approach to immigration enforcement, which involved record deportations and an expansion of family detention, but to improve upon it.

Biden will issue an executive action bringing an end to Trump’s controversial travel ban on noncitizens from 13 countries. It also directs the State Department to resume visa processing and develop a plan to rectify harms caused by the bans, especially for those who were unable to obtain a waiver and whose visas had been denied.

The policy, colloquially known as the “Muslim ban,” first went into effect in January 2017 and became one of Trump’s signature immigration policies. The ban has slowed or altogether halted legal immigration from certain countries that the former administration deemed to be security threats, keeping families apart and even stymieing refugee resettlement.

The ban was amended several times in the face of numerous court challenges arguing that Trump did not have the legal authority to issue it and that it unlawfully discriminated against Muslims. The third version of the ban, ultimately upheld by the Supreme Court, barred citizens of seven countries — Iran, Libya, Somalia, Syria, Yemen, Venezuela, and North Korea — from obtaining any kind of visas, largely preventing them from entering the US. (Chad was taken off the list of countries subject to the ban in April 2019 after it met the Trump administration’s demands to share information with US authorities that could aid in efforts to vet foreigners.)

Trump expanded the ban last February to include additional restrictions on citizens of six more countries: Myanmar, Eritrea, Kyrgyzstan, Nigeria, Sudan, and Tanzania. While they could still visit the US, citizens of these countries were, for the most part, barred from settling in the US permanently.

Biden will issue a memorandum ensuring that the Deferred Action for Childhood Arrivals program — a longtime target of the Trump administration — remains intact and urging Congress to pass permanent protections for the almost 700,000 young undocumented immigrants who have benefited from it. His own immigration reform proposal, which he will send to Congress on Wednesday, would offer them a three-year path to citizenship.

Trump tried to rescind the Obama-era program in 2017, throwing DACA recipients into a kind of limbo in which they lived in fear of imminently losing their legal status and their ability to continue living and working in the US free from fear of deportation.

The Supreme Court thwarted that attempt last year, but his administration continued to refuse new applications for the program, despite the fact that another 1.3 million immigrants had become eligible. A court eventually ordered him to begin accepting new applications, fully restoring the program.

But a pending lawsuit in Texas federal court continues to threaten the program. A coalition of states, led by Texas, have argued that then-President Barack Obama did not have the authority to create DACA, asking that it be terminated.

Upon leaving office, Trump had completed 450 miles of construction on the border wall — a physical reminder his efforts to keep out asylum seekers and other vulnerable migrants. But despite what he promised in 2016, he didn’t build 1,000 miles of wall and Mexico never paid for it; instead, the more than $15 billion burden fell on taxpayers and was partially transferred from the Pentagon’s budget without congressional approval. And he was only able to construct it by waiving environmental and contracting laws and seizing private land.

Biden promised on the campaign trail that “there will not be another foot of wall constructed on my administration.” He will issue a proclamation on Wednesday immediately pausing construction and ending the national emergency declaration that Trump used to divert funding to constructing the wall.

But fully terminating preexisting construction contracts could prove complicated, especially since the Trump administration rushed to draw up more such contracts in its final days. It will likely require settling with each individual contractor, a time-consuming endeavor, and making payments for work that has already been done.

There are also questions about what happens to the almost $1.4 billion that was diverted to fund the wall but has yet to be spent. Biden’s executive order will require officials to determine the best way to redirect that money.

Biden will rescind Trump’s memorandum to exclude undocumented immigrants living in the US from census population counts for purposes of redrawing congressional districts in 2021.

Doing so would have reduced the population counts in areas where foreign-born populations have traditionally settled — primarily Democrat-run cities — and therefore undermined their political power. But it could have also affected red states with large immigrant populations, including Texas.

Biden will also ensure that the Census Bureau has enough time to complete an accurate population count for each state.

States currently draw congressional districts, determining the areas that each elected official represents based on the total population, including undocumented immigrants. The current maps are due to be redrawn this year after the results of the 2020 census come in, and the stakes are high: Each redistricting has a lasting influence on who is likely to win elections, which communities will be represented in Congress, and, ultimately, which laws will be passed. If states can’t complete their redistricting efforts ahead of upcoming elections, including the midterms in 2022, courts can intervene and draw temporary maps.

Biden will repeal an executive order that enabled a massive expansion of immigration enforcement inside the US.

Given that immigration enforcement agencies have limited resources, presidents typically identify what classes of immigrants should be prioritized for deportation. Under former President Barack Obama, that included people who posed a threat to national security, immigrants convicted of serious crimes, and recent border crossers. But Trump’s executive order essentially eliminated those priorities, sending the message that no undocumented immigrants — including families and longtime residents — were safe from deportation.

Biden’s action on Wednesday will allow the immigration enforcement agencies to revert to those Obama-era priorities.

Biden will extend temporary protection from deportation and work authorization for Liberians under the Deferred Enforced Departure (DED) program until June 30, 2022. Trump had threatened to end the program, throwing the future of 4,000 Liberians with DED status into doubt.

Civil war drove thousands of Liberians to seek refuge in the US from about 1989 to 2003 under DED. But conditions in Liberia haven’t sufficiently improved — the economy remains on shaky footing, and the country was hit by an Ebola epidemic. Ending DED would constitute discrimination based on Liberians’ race and national origin, they have argued in court.