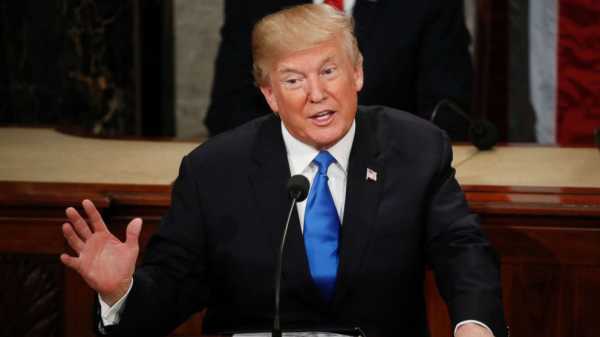 The president acknowledged that North Korea is perilously close to putting a nuclear device onto a missile with the range to hit the United States, but had no new strategy to rein Jong-un in.

“North Korea’s reckless pursuit of nuclear missiles could very soon threaten our homeland,” he told Congress. “We are waging a campaign of maximum pressure to prevent that from ever happening. Past experience has taught us that complacency and concessions only invite aggression and provocation. I will not repeat the mistakes of past administrations that got us into this very dangerous position.” In his September speech to the United Nations, Trump threatened to “totally destroy” North Korea if it attacked. He stopped short of that kind of rhetoric last night, saying only that North Korea had “depraved character,” and showcasing defector Ji Sung-Ho, a special guest whose presence at the speech was sure to irritate his North Korean counterpart.

The No. 2 general in the U.S. military, vice-chairman of the Joint Chiefs of Staff Gen. Paul Selva, yesterday told reporters that because North Korea has changed up the way it launches missiles, it could take longer for the U.S. to detect a launch if it happens. Selva, like the rest of the administration, would not rule out a pre-emptive “bloody nose” strike to deter Kim.

Meanwhile, the White House abruptly took its pick for U.S. Ambassador to South Korea, Victor Cha, out of the running, leaving a critical position unfilled. Thirty minutes before Trump’s speech, the Washington Post published an op-ed by Cha questioning the notion that a pre-emptive ‘bloody nose’ strike would deter North Korea.

“If we believe that Kim is undeterrable without such a strike, how can we also believe that a strike will deter him from responding in kind?” wrote Cha. “And if Kim is unpredictable, impulsive and bordering on irrational, how can we control the escalation ladder, which is premised on an adversary’s rational understanding of signals and deterrence?”

This line got one of the night’s only aisle-to-aisle standing ovations:

“I’m proud to report that the coalition to defeat ISIS has liberated very close to 100 percent of the territory just recently held by these killers in Iraq and in Syria and other locations as well,” declared the president. “But there is much more work to be done. We will continue our fight until ISIS is defeated.” 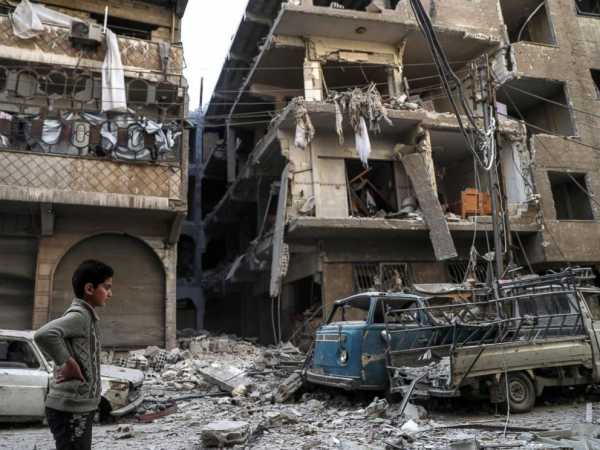 Last week, U.S. Secretary of State Rex Tillerson laid out specific goals for Syria. He said the goal wasn’t only to defeat ISIS and Al Qaeda, but also work to remove Syrian leader Bashar Assad, ensure Syria is free of weapons of mass destruction, and make it safe for refugees to return home -– all goals former President Obama pursued and failed to achieve.

But like his boss said tonight, Tillerson warned that the U.S. is there for the long haul.

“It is vital for the U.S. to remain engaged in Syria,” said Tillerson. “A total withdrawal of American personnel at this time would restore Assad and continue his brutal treatment against his own people.”

Protesters take to the streets, project anti-Trump messages onto his DC hotel over SOTU

In Afghanistan, where 14,000 U.S. troops are currently serving, prospects for a swift exit are even dimmer, and the administration’s strategy even murkier.

“Our warriors in Afghanistan also have new rules of engagement,” Trump said. “Along with their heroic Afghan partners, our military is no longer undermined by artificial timelines, and we no longer tell our enemies our plans.” Omar Sobhani/ReutersAfghan men carry the coffin of one of the victims of yesterday’s car bomb attack at in Kabul, Afghanistan, Jan. 28, 2018.

In recent weeks the Taliban has carried out a series of deadly attacks in Kabul, the country’s capital.

On Monday, Trump declared “there’s no talking to the Taliban, we don’t want to talk to the Taliban.” That’s a big shift from the policy outlined by Defense Secretary James Mattis, who last September said, “The only path to peace and political legitimacy for them is through a negotiated settlement.”

Russia — the elephant in the room — was mentioned just once by the president, who lumped them in with China as rivals “that challenge our interest.”

That’s hardly surprising since the Russia issue is so politically radioactive. But beyond the dark shadow of the Mueller investigation and all the political acrimony over the FBI investigation of Trump, Russia remains a serious national security concern.

In an interview with the BBC this week, CIA Director Mike Pompeo said he thinks Russia, unfazed by the blowback over its interference in the 2016 election, will try to meddle with this year’s midterms as well.

“I have every expectation that they will continue to try and do that,” said Pompeo, “but I’m confident that America will be able to have a free and fair election [and] that we will push back in a way that is sufficiently robust that the impact they have on our election won’t be great.” 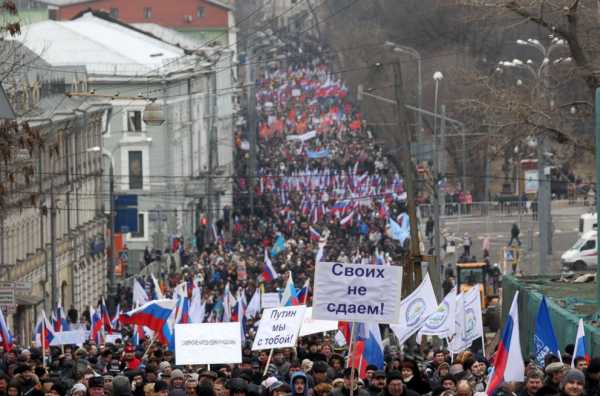 Sasha Mordovets/Getty ImagesPeople attend a rally to support Russian President Vladimir Putin with the invasion of Crimea, March 2, 2014, in Moscow.

How robust? The Treasury Department this week released a new list of Russian oligarchs who could be subject to future sanctions. But it lifted the list straight from the pages of Forbes Magazine, fodder for Democrats who believed Trump wasn’t taking the Russia threat seriously enough.

Russian President Vladimir Putin didn’t seem particularly alarmed. He called the list “a hostile act,” then swatted it aside, saying “the dogs bark but the caravan moves on.”