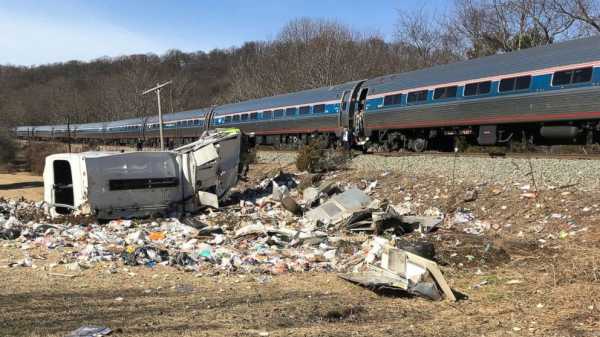 The three-day retreat was designed to be a restful time outside of Washington D.C. during which the GOP could discuss its agenda for the coming year. President Donald Trump and Vice President Mike Pence are scheduled to speak.

But the mood changed at 11:20 a.m. in Crozet, Va., just outside Charlottesville, when the Amtrak train struck a garbage truck.

“I’m an engineer so I know when you feel something that’s got as much mass as a train, anything you hit that causes you to feel it on the train, you know it’s a pretty significant collision,” Rep. Bruce Westerman, R-Ark., told ABC News.

It’s unclear just how many lawmakers were on board as some had arranged separate transportation but Rep. Neal Dunn estimated more than 200 Republicans from both the Senate and the House were on board, many with families and staff.

House Speaker Paul Ryan was on the train and is fine, according to a senior aide. Senate Majority Leader Mitch McConnell was not on the train.

Vice President Pence, who is scheduled to speak at the retreat Wednesday night, tweeted he will still be there.

“Getting regular updates on the Amtrak crash involving members of Congress and their families. Praying for all involved & grateful for the swift action of first responders. @POTUS and I will continue to monitor closely. I’m heading to WV later today.”

Also on the draft schedule was a program for congressional spouses that includes a lounge in the Tea Garden, painting and a reception hosted by spouses of House GOP leaders. There’s also a “fun-filled” children’s program, and a teen lounge “stocked with video games, board games and snacks.” Plans include “bowling and Nerf Battle in the Bunker.” Attendees would have opportunities to give back, such as packing care packages for U.S. troops.

But Republicans were set to get down to business too. Wednesday afternoon, Speaker Ryan and Senate Majority Leader McConnell were scheduled to give their vision for America to both House and Senate members. Secretary of State Rex Tillerson is scheduled to speak at a breakfast Friday morning. There are to be working groups on infrastructure, the work force, and government reform. UN Ambassador Nikki Haley is to speak Thursday night and counselor to the president Kellyanne Conway is scheduled to speak Friday morning.

The attire for the weekend was business casual.

A spokesperson for the Congressional Institute, which organizes the retreat, said that after talking with leadership in both the House and the Senate, “the retreat will proceed with an adjusted program.”

It “will now include a moment of prayer for those involved in today’s incident and a security briefing from the Sergeant at Arms and United State Capitol Police.”

Rep. Dunn, a Republican from Florida, and a member of the “Doc-Cauc” – a group of doctors who are also members of Congress – told ABC News he and other doctors jumped out of the train to help after the collision.

“Every member of doc caucus got out of the train and helped the guys who’d been injured,” he said.

“I’m a surgeon. I’m used to getting involved in these things. The toughest thing was getting out of the train because you know the door was locked.” However he said that another congressman who was an Army Ranger “knew how to unlock the door and he got us out.”

Also lending a hand was Rep. Brad Wenstrup, R-Ohio, who has been in this situation before. Wenstrup, who practices podiatric medicine, administered aid to Rep. Steve Scalise when the Republican whip was shot at a congressional baseball practice last June.

Scalise was not on the train.

“Please take a moment to pray for those injured in the train accident in Virginia this morning. I was not on the train,and have confirmed with my staff aboard the train that they are all safe,” Scalise tweeted.

Rep. Jason Lewis, R-Minn., was being checked for a possible concussion, an aide said.

Lewis’ staff tweeted from the lawmaker’s official account: “Due to the impact of the train collision and as per standard concussion protocol, Rep. Lewis is going to be checked out at a local hospital.”

In a tweet later Wednesday, his staff said “Rep. Lewis is grateful for the care of the clinical staff at UVA Medical Ctr in Charlottesville. He’s been discharged & traveled onto the GOP retreat, where he is recovering from a concussion. He looks forward to participating in the retreat as much as he is able.”

In the end the train ride probably will bond the lawmakers aboard – but not in the way planned.

“To look out the window and see the debris and the garbage truck, I knew there were probably people injured. My thoughts and prayers are with the ones who are on the truck and our families,” Rep. Westerman said.