During the opening speech at Thursday’s Summit for Democracy, President Joe Biden told the assembled international leaders that the stakes of their meeting were nothing less than existential: that the survival of democracy itself depended on what his audience did next.

“We stand at an inflection point in our history,” Biden said. “The choices we make at this moment are going to fundamentally determine the direction our world is going to take in the coming decades.”

No one other than Secretary of State Antony Blinken was in the room to hear Biden’s call to action. The summit is a fully virtual affair due to the pandemic, with leaders of democratic countries speaking to each other via videoconference.

Absent the applause and pageantry of an in-person event, Biden’s words rang strangely hollow. It was as if he was issuing a dire warning to no one in particular.

This is a decent metaphor for the current American approach to democracy where it counts the most — at home.

There is no doubt that democracy in the United States is at serious risk. The year began with an attack on the Capitol designed to thwart the transition of power; instead of repudiating this violence, Republicans doubled down on the lie that Trump won the election and are working, right now, to rig the system in their favor. Neither Democrats nor the general public are doing much of anything to stop them.

Several pieces of legislation on voting rights have been stopped cold by the filibuster, as neither Sen. Kyrsten Sinema (D-AZ) nor Sen. Joe Manchin (D-WV) seems willing to make an exception to the archaic Senate rule in order to protect democracy. Meanwhile, the voters who care are mostly Republican partisans, believers in Trump’s lies about 2020. An October poll found that 71 percent of Republicans believe democracy is facing a “major threat,” as compared to just 35 percent of Democrats.

Experts on democracy warn that America is sleepwalking toward a disaster, a situation where the electoral playing field is so tilted in the GOP’s favor that America’s people no longer have a meaningful voice in who rules them. “We’ll wake up one day, and it’ll become clear that Democrats can’t win,” says Tom Pepinsky, a political scientist at Cornell University.

In theory, the Summit for Democracy is supposed to be the crown jewel of Biden’s global democracy agenda. It kicks off an international “year of action” where countries across the world, including the United States, work to strengthen democracy at home and abroad. In his speech, Biden called for the passage of two laws — the Freedom to Vote Act and the John Lewis Voting Rights Act — as a way for America could fulfill this promise.

But so far, neither his government nor the public in general is doing much to force these bills through. It’s a state of affairs that raises a grim question: Is this what it looks like when a democracy dies and nobody cares?

We need a mass pro-democracy movement. It doesn’t exist.

Across the world, there are many cases of democratic “backsliding” — where a once-stable democracy starts buckling, taking on characteristics of an authoritarian system. Sometimes, as in modern Venezuela or Hungary, this ends in a full-tilt slide away from democracy. Other times you get “near misses,” cases where democracy beat back the authoritarian threat. Some notable cases include Finland in 1932, Colombia in 2010, and South Korea in the mid- to late 2010s — countries that are all participating in Biden’s democracy summit.

When you read about these near misses, two factors prove decisive again and again: when a society’s elite stands up to an authoritarian faction, using their power to beat it back, and when the mass public organizes and demonstrates in favor of democracy.

In Finland, conservative President Pehr Evind Svinhufvud’s repudiation of violence committed by the fascist Lapua Movement played an important role in its decline. In South Korea, massive street protests against President Park Geun-hye helped create the conditions for her impeachment and, ultimately, a 22-year jail sentence for corruption and election law violations.

In the United States, we are experiencing failures on both the elite and mass public level. Republican elites, unlike Svinhufvud, have chosen to normalize the violence committed by their extreme right flank on January 6 — and pass legislation, like Georgia’s SB 202, that actually enable Republican partisans to subvert the 2024 election.

Many elite Democrats are fully aware of the problem. Some, like Sen. Raphael Warnock (GA) and the activist group Indivisible, have worked to try to sound the alarm. But at the very highest levels of the party, democracy has become something of a side issue rather than a top priority.

“Democracy will be on trial in 2024. A strong and clear-eyed president, faced with such a test, would devote his presidency to meeting it,” the Atlantic’s Barton Gellman writes. “Biden knows better than I do what it looks like when a president fully marshals his power and resources to face a challenge. It doesn’t look like this.”

There’s a similar asymmetry on the mass public level. The Trump faithful are gearing up for a fight in 2024, organizing at the very local level to influence the outcome of future elections. A September ProPublica investigation documented the emergence of a “precinct strategy,” beginning with a call to action on Steve Bannon’s radio show, in which Republicans have begun flooding local voting precincts with volunteers who could shape the counting process in the next election cycle. 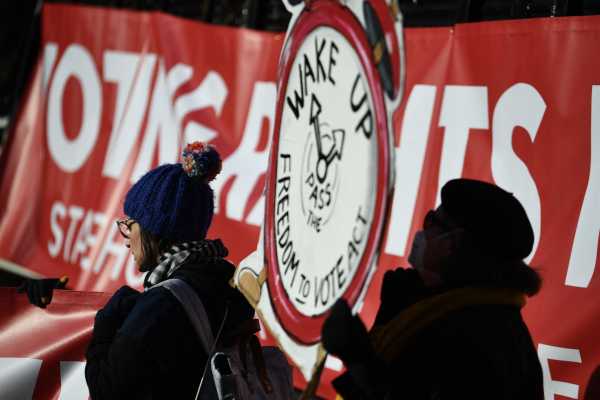 Republicans, at both the elite and mass public level, are actively organizing against democracy — with largely ineffectual pushback from Democratic elites and partisans. There is no evidence of a mass movement to save democracy in America today.

Broadly speaking, it looks like elites and the mass public are locked in a mutually reinforcing democratic disinterest loop. The party leadership has chosen a political strategy that deprioritizes democracy reform, making partisans less likely to care about the issue. At the same time, Democratic partisans are less interested in the issue with Trump out of power, making them less likely to push their leaders to act.

“The Democratic coalition is focused on normal coalition politics and governing, which is understandable in some ways but also neglects the gathering threat,” explains Brendan Nyhan, a Dartmouth political scientist and the co-director of the pro-democracy group Bright Line Watch. “Covid and the economy have sucked up a lot of oxygen and Trump is receiving a tiny fraction of his past coverage. Diffuse threats to democracy don’t command the same level of attention.”

In this sense, the politics of saving democracy look like a sped-up version of the politics of climate change. In theory, everyone on the Democratic side knows it’s important. In practice, the threat feels remote and abstract — far enough removed from their everyday concerns that they aren’t willing to change their behavior to avert looming catastrophe.

I asked Rob Lieberman, an expert on the history of American democracy at Johns Hopkins University, about what social forces could take us off this current path. His first thought was pointing to the summer of 2020, where Americans across the country organized against racism and galvanized successful police reform efforts across the country. That energy, he thinks, could be harnessed in democracy’s defense.

“If the Democrats, or the Black Lives Matter movement, or some coalition on [the pro-democracy] side can mobilize around the idea of multiracial democracy, and a vision that embraces that, maybe that’s a possibility,” he said.

That the prospect feels so remote at this late hour suggests just how serious our situation is — how difficult it will be, in the coming years, for America to remain a democratic model for the world.

California could transform how fast food workers are treated