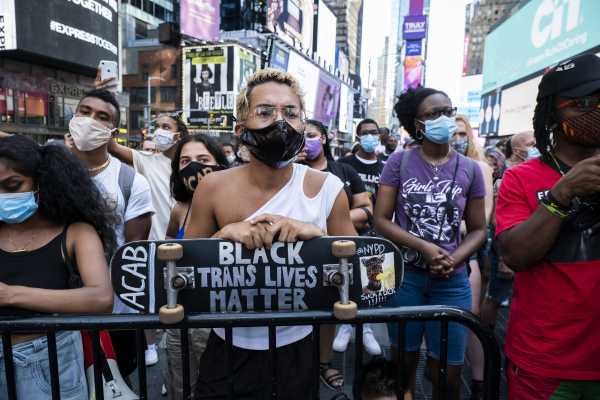 Steuben County, New York, seems like an unexpected place to find one of the nation’s most progressive transgender prison policies. The rural and conservative county lies just west of Elmira, in the central part of the state, about a four and a half hour drive from New York City. But thanks to a recently announced legal settlement, it now has a trans jail policy that could serve as a model for other prison systems throughout the state — and even the rest of the country.

At the center of the case is Jena Faith, who was picked up by police in April 2018 for allegedly using counterfeit money to buy pizza, beer, and chicken wings, and initially sent to the Steuben County Jail for pre-trial confinement, according to a legal complaint filed in August 2019. During intake, Faith informed jail officials that she is transgender, having begun her medical transition six years earlier and changing her name and gender marker in 2014.

Initially, she was housed in the jail’s women’s facility but several days later was transferred to the men’s side and put in the general population. Once there, jail staff discontinued her hormone replacement treatment, she told Vox. A fellow inmate — a man and registered sex offender — began harassing her, touching her, blowing kisses at her, writing her letters saying he loved her, and propositioning her.

At first, her complaints were ignored, and she hid in her cell as often as possible. Later, she was transferred to a different portion of the jail in which several inmates lobbed homophobic and transphobic slurs at her, according to her initial legal complaint.

Faith was confined there for four months and her mistreatment was enough to prompt her to file a lawsuit against the county sheriff, who is responsible for managing the jail, as well as jail staff.

“I felt that I should have been respected as being a woman,” she told Vox, pointing to New York state law protecting trans people who aren’t incarcerated. “They can’t discriminate against you, but when you’re in jail they can do whatever they want and I thought that was wrong.”

According to a settlement in Faith’s case, which was announced Tuesday, trans people in Steuben County will now be presumptively held according to their gender identity, not their assigned sex at birth.

The new policy, which the New York State Sheriff’s Association consulted on, also requires the jail to administer hormones according to an inmate’s prescribed schedule and follow a number of trans-inclusive policies affecting incarcerated individuals’ daily lives.

LGBTQ advocates hope that the new trans policy in Steuben County can be applied elsewhere in New York state and throughout the rest of the country. If that were to happen, it would be a victory for trans people, given the community’s disproportionately high rate of incarceration.

According to a joint study by the National Center for Transgender Equality and the National Gay and Lesbian Task Force, 21 percent of all trans women have been incarcerated at some point in their lives compared to a 5 percent incarceration rate among the general population. That percentage jumps to 47 percent for Black trans women.

“We know that it is a workable policy that can easily be implemented in any county in New York state and throughout the nation,” said David Brown, legal director at the Transgender Legal Defense and Education Fund (TLDEF). “There’s no reason to think that the conditions are so different that it can’t easily be adapted to serve any jail.”

Steuben County’s new policy is not a first of its kind (the California state Senate passed a bill in May 2019 which would institute a similar policy), but it’s progressive because it recognizes trans people as human beings who experience unique threats based on their identity. Trans women specifically are often singled out by anti-trans activists as potential physical and sexual threats to cisgender women, an unfounded myth based largely on stereotypes. In actuality, they themselves are statistically the most at-risk imprisoned demographic.

The new Steuben County policy skirts the political issue behind housing trans women with cis women by allowing for any risk toward fellow inmates to be assessed on a case-by-case basis, rather than assuming all trans women are a risk. This is how risk assessments for cis inmates have been done for a very long time. In other words, trans women are presumptively housed in the women’s unit unless there is a specific reason to deem an individual a risk, in which case other accommodations would be made.

Beyond the policy’s housing stipulations, there are several other key provisions that put it among the most progressive in the country:

The fight for trans prison justice is a piecemeal process

As with many issues around prison justice, the sheer number of state and local jurisdictions makes the nation a patchwork of different policies when it comes to where and how to treat transgender prisoners.

While statistics are difficult to come by, trans women are most commonly imprisoned in men’s facilities. A 2017 review of 21 state policies conducted by the Prison Policy Institute found that just eight states allowed for trans housing decisions to be made on a case-by-case basis, rather than according to assigned sex at birth. In men’s prisons, trans women are nine times more likely to face physical or sexual violence than other inmates, according to a National Center for Transgender Equality report.

Congress has acknowledged the problem, laying out guidelines in the Prison Rape Elimination Act in 2003. But the executive branch ignored the issue for nearly a decade — it wasn’t until 2012 that the Obama administration rolled out a new Department of Prisons policy requiring prisons to take steps to eliminate sexual assault, including against trans inmates.

This was too much for the Trump administration, which reversed the policy in May 2018 to once again house trans people according to their assigned sex at birth.

As a result, in order to keep trans inmates safe, they are often held in solitary confinement — but that’s not a good idea for prisoners’ mental or physical health, either. This was the case for Layleen Polanco in New York City’s Rikers Island. While incarcerated in June 2019, Polanco died of a seizure. While Polanco lay lifeless in her cell last June, correctional officers stood outside her cell laughing, according to security footage released this summer. Prison staff had failed to conduct the 15-minute-interval health check-ins that are required for prisoners held in solitary confinement. Staff told investigators that they thought she was sleeping. It was her third seizure in custody.

In June, an investigation by the Bronx District Attorney’s office cleared prison staff of any wrongdoing in Polanco’s death, even though the DA report also indicated that correctional officers had left her alone for up to 47 minutes, contravening jail regulations.

“You have facilities that are placing trans people in solitary confinement because they refuse to place people in safe housing outside of solitary confinement,” said Zahara Green, executive director of Transcending Barriers, a trans-led nonprofit that supports the trans community in Georgia. “There are many issues with solitary confinement that we suffer psychological issues or mental health issues. … It’s something that exists within these prison systems all over the nation.”

Polanco’s death has spurred discussion on how to better accommodate trans women in prison. “I have found myself in the room with many prison officials all over the nation. What they’re saying is that when they try to implement policies or create policies to protect trans people from sexual abuse and physical abuse and confinements, especially trans women, they have to deal with pushback from legislators,” said Green.

Trans people have also sued, as Faith did, in order to be housed correctly. In 2018, a 52-year-old trans woman in Massachusetts named Angelina Resto sued the state prison system after she was housed in a men’s prison facility after being convicted of a nonviolent crime. Resto had transitioned more than four decades before her conviction, and yet the prison system housed her with men; she claimed she was repeatedly sexually harassed and assaulted by other prisoners as well as prison staff.

In September 2018, Resto won her suit and became the first trans woman in the country to be transferred from a men’s prison to a women’s facility, according to attorneys at GLBTQ Legal Advocates and Defenders. Several similar lawsuits have been brought since.

It’s the systemic change in Steuben County that’s most important to Faith, who praised the policy change even though she’s no longer locked up. “I’m just tired of the mistreatment and they need to know that it stops now,” said Faith. “No more hatred towards the community.”

Democrats in Congress aren’t giving up on a public option