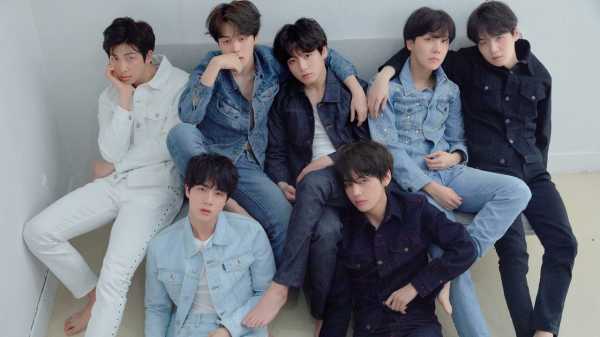 Last week, on the tentative eve of a summit between North Korea and the United States, facilitated in part by the South Korean President, Moon Jae-in, the seven-member boy band BTS became the first K-pop group to crest the Billboard 200. The timing felt fated, if not auspicious: on Memorial Day weekend, American citizens received and relished a Korean act (the band’s “Love Yourself: Tear” is also the first chiefly foreign-language record to top the chart in twelve years) while diplomats worked to restore a potentially bungled opportunity for peace.

K-pop has had a tentative foothold in the States for a while now—six years ago, the Korean rapper Psy had an oddball hit with “Gangnam Style,” a blaring rap song about rich girls, and a magnificent excuse to do the horse-riding dance—but the genre’s hyper-stylized aesthetic can make even its most earnest bands feel like novelty acts. (The American pop market tends to appreciate a certain rawness eking out from beneath the glam—a glimpse of persevering humanity.) K-pop stars are selected, frequently as children, for their good looks, and then aggressively minded and groomed for success by teams of producers and managers. Suggestions of licentiousness or lust are handily eradicated from their songs (and usually their live performances, too), while mistakes or ad-libs are unthinkable. The choreography alone is a thing to behold. These groups are large—sometimes up to twelve members—and they move with the kind of precision otherwise witnessed only at high-level cheerleading competitions. I found it briefly disconcerting to see studied determination applied to something like club dancing—a practice that is, at least in theory, rooted in spontaneous expression, a kind of carnality—but then I set aside my scruples and immediately started trying to learn the moves so that I, too, could look awesome.

The band’s members (Jin, Suga, J-Hope, RM, Jimin, V, and Jungkook) are all in their early-to-mid-twenties. Musically, BTS is indebted to new jack swing, a genre honed by the producers Teddy Riley and Bernard Belle in the late nineteen-eighties. (It melds braying R. & B. vocals with dance-pop beats, often with a swing on the sixteenth note.) But BTS is less explicitly inspired by the sound’s early progenitors (Bell Biv DeVoe, Boyz II Men, Janet Jackson) than by its later adherents (’NSync, the Backstreet Boys, Britney Spears). Although K-pop now features E.D.M. production and the occasional rapped verse, the whole thing has a strong whiff of “TRL” circa 2000. Still, the audience reaction shots from the band’s performance at the Billboard Music Awards earlier this month revealed young women going cuckoo, clutching themselves in a kind of hysterical rapture. They hollered along to the song’s English chorus: “I’m so sorry, but it’s fake love.”

BTS differs from the boy bands of yesteryear in that its members’ presentation is fairly androgynous—they wear dangly earrings and visible makeup, and when they’re shot in closeup it’s to emphasize their soft, dewy skin. They write and produce most of their own material, which is unusual within K-pop, and they occasionally imbue their work with high-minded literary themes. Their album “Wings,” from 2016, was based loosely on Herman Hesse’s “Demian,” a bildungsroman from 1919, in which a young boy named Emil Sinclair chooses self-realization over a world of illusions. “I have been and still am a seeker, but I have ceased to question stars and books; I have begun to listen to the teaching my blood whispers to me,” Emil concludes.

Teen-agers have long flocked to these sorts of enterprises as beacons, pointing the way to adulthood—safe outlets for a burgeoning lust. But these days young fans are also able to galvanize their collective fandom online, and feel empowered by its force. BTS’s most fervent followers are known as the ARMY, an acronym for Adorable Representative M.C. for Youth. (If I’m understanding the mythology correctly, BTS is often positioned, in Korea, as defenders of young people—the band once released a trio of albums about the challenges of attending school.) The ARMY is a formidable block on social media; BTS recently entered the Guinness World Records for its extraordinary Twitter engagement. (The band nets an average of more than two hundred and fifty thousand retweets each time it posts.)

The ARMY’s dedication to the cause certainly had something to do with BTS reaching No. 1. But K-pop’s long-awaited U.S. chart ascendance is likely the end result of a strange confluence of factors, including, curiously enough, the recent installation of the U.S. Terminal High Altitude Area Defense system, or THAAD, in South Korea. Its placement enraged the Chinese government, which believed that it could be used to spy on China’s own defense programs; China quickly boycotted all Korean cultural imports, including K-pop, thus inadvertently pushing the music westward, toward Europe and the United States.

The members of BTS are deeply, plainly deferential to their fans, and appear grateful to the machinery that brought them all together—per Korean (and Chinese, and Japanese, and Vietnamese) culture, there’s a great deal of respectful bowing. Unlike American pop stars, who tend to embrace and perform bravado (or at least a kind of outsized independence), the members of BTS are humble in interviews: “It’d be an honor for us to work with anyone,” J-Hope told Rolling Stone last year, when asked about potential collaborations. In the same interview, Suga said that the band avoids political songs because the topic “is fraught with danger, not in a literal way, but because of the risk of being misunderstood by young people who may not have fully developed sensibilities.” That BTS chooses to avoid suggestive material because its members believe that it’s irresponsible to foist complicated ideas onto kids is fairly staggering in a Western pop context—here, the question of what’s good or right for an audience rarely plays into major commercial decisions. Which is perhaps why America is embracing BTS and K-pop now, during a decade in which the idea of a personal moral responsibility feels endangered. That, and the incredible way they move.