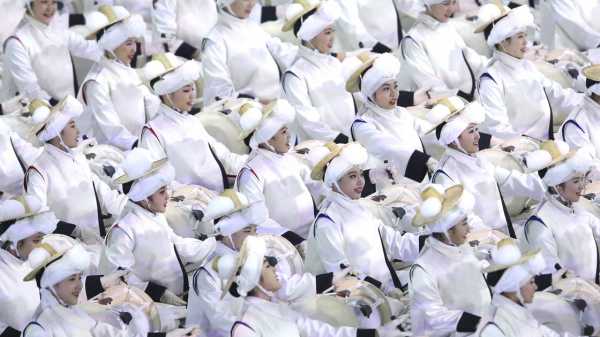 There aren’t many multinational cultural events that can be celebrated
as plainly and prevailingly decent. The opening ceremony of the Olympic
Games—during which the participating teams march in a circle, and an
athlete from the host country (this year, the beloved South Korean
figure skater and gold medallist Kim Yu-na) sets the Olympic cauldron
ablaze —feels like one of them. People who have trained preposterously
hard to perform wild feats of strength and grace walk into a stadium,
alongside their fellow citizen-athletes. Each team wears a special
matching outfit. Many of the outfits are goofy. Because sport, more
generally, has no explicit purpose beyond the joy it brings its players
and spectators, the Olympics feel like a testament to human pleasure:
let us gather, and do these pure and ridiculous things for fun.

The tradition of the Olympic torch began in 1928. The idea was to
commemorate the sacrifice of Prometheus, the Greek Titan who fashioned
man from clay, and later stole fire from the gods to share with his
creation, thus ensuring humanity’s progress and perpetuation. Prometheus
was punished by Zeus for his hubris—strung up on a hillside, where birds
of prey pecked away at his organs for all of eternity. But his
intentions (he was a smart and righteous deity—a kind of proto-Robin
Hood, brazenly redistributing abundance) stand as noble. It feels
fitting that we humans honor him every few years.

Inevitably, I get very excited when the Parade of Nations starts. Such
capable and powerful creatures! (My sport, Typing Slowly While Eating
Room-Temperature Lo Mein, is not yet included in the Games.) This year,
most everyone—nearly three thousand athletes, from ninety
countries—appeared genuinely thrilled to be in Pyeongchang, loopy on
outsize pomp, and calculated risk. At the Winter Games, in particular,
many athletes imperil their perfect bodies to do just one insane and
astonishing thing: to go rocketing off a ski jump, say, while doing some
cool, twisty moves, and then landing on an incline and gliding casually
to the bottom, no big deal. Let no one tell you that only the poets
surrender themselves for beauty.

K-pop, the hyper-stylized, staggeringly precise, chirpy strain of pop
music that dominates South Korea, filled Pyeongchang Olympic
Stadium—BTS’s “DNA
(Remix),” Big Bang’s
“Fantastic Baby,” and
Twice’s “Likey” all
played. A ring of Korean dancers in pink snowpants danced
continuously—for more than an hour! Give them medals! Give them
everything!—as the competitors entered and circled the stadium,
beholding both themselves and the spectacle around them.

North and South Korea marched together, as a unified nation (their black
sneakers merely said “KOREA,” in large white text). In the stands, Kim
Yo Jong, Kim Jong Un’s sister, was seated close to Vice-President Mike
Pence; Fred Warmbier, the father of Otto Warmbier, the American college
student who was detained in North Korea and sent back to the U.S. in a
coma, and later died, was also there. Each time an NBC camera cut to
Pence, he kept his eyes fixed forward. He had not expressed much
interest in diplomacy with North Korea—earlier this week, he promised
the toughest sanctions to date—and declined to stand when the unified
Korean team appeared (he and his wife, Karen, stood only for the
American team).

Tonga, a Polynesian kingdom in the South Pacific, sent the cross-country
skier Pita Taufatofua—who also participated in the 2016 Summer Olympics,
then in Tae Kwon Do—as its only representative. Despite the cold
temperatures in Pyeongchang (it was around twenty-eight degrees
Fahrenheit when the festivities began), he strutted about the stadium
wearing only sandals and a traditional ta’ovala mat, which is made of
pandanus leaves and ties around the waist. (He wore a similar outfit at
the Rio Games, in 2016.) This is high ceremonial dress in Tonga. His
chest was sufficiently greased and gleaming. The crowd went bananas upon
his approach, and why not—the man looked terrific! Another thing that
feels eternally delightful, no matter the year: a bobsledding team from
a tropical country. For the first time, Nigeria sent a delegation to the
Winter Games, in the form of its excellent women’s bobsled team, which
is made up of former track-and-field champions Seun Adigun, Ngozi
Onwumere, and Akuoma Omeoga. They wore gorgeous, emerald-green gele,
embellished with rhinestones.

Team U.S.A.—which comprises two hundred and forty-two athletes, making
it the largest team ever, for any country, at any Winter Games—jogged
out to the K-pop whopper, “Gangnam
Style,” a worldwide hit
for the rapper Psy, in 2012. Their coördinated ensembles were made by
Ralph Lauren, who has designed Team U.S.A.’s opening ceremony outfits
since 2008. This year’s getup consisted of blue jeans, hiking boots, a
red-white-and-blue intarsia-knit wool sweater, a matching wool hat, and
a parka that included an eleven-hour, battery-operated heating system.
The team members also wore fringed leather gloves. The gloves were
humungous and, therefore, inescapable—athletes spend much of the parade
waving to the crowd. For me, they evoked both “industrial welding” and
“honky-tonking,” two pastimes that, I suppose, are as American as
anything.

“I hate the headlines, and the weather,” the Kiwi pop star Lorde sings
on “Perfect Places,” a
single from her most recent album. It’s a deeply relatable line: a
February kind of sentiment. Let us rejoice, then, in this strange and
elaborate display of beauty, and competition, and flesh and bone—a
victory lap for all the untold miracles within us.