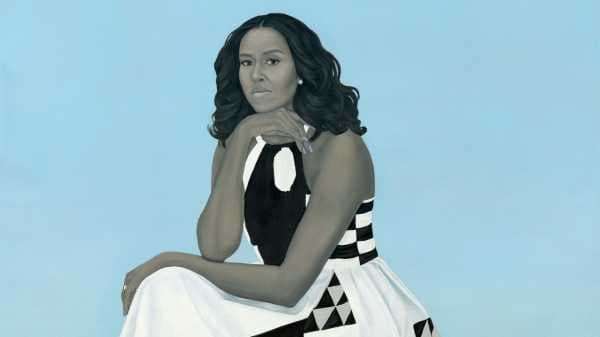 The gray skin in Michelle Obama’s portrait feels at first like a loss, and then like a real gain.

The former First Lady Michelle Obama’s decision to commission the
Baltimore painter Amy Sherald for her official portrait was intriguing.
Like the former President Barack Obama’s choice of the painter Kehinde Wiley for his own portrait, it was a demonstration of discriminating taste; these paintings, in the eclectic Smithsonian halls, will relate more easily to Douglas Chandor’s study of
Franklin D. Roosevelt’s upper half and fiddling hands, the atomizing of
Bill Clinton by Chuck Close, than to Robert A. Anderson’s conservative
transcription of George W. Bush. Sherald and Wiley, the first black
recipients of commissions from the National Portrait Gallery, are
artists with points of view. Wiley is a glittering propagandist who
catapults the common black man and the occasional black woman into
historical environments of rearing equines and colonial fleur-de-lis
tapestries. He placed Obama against his ancestral flora, “hyper-visible and yet always partly hidden,” as my colleague Vinson Cunningham writes.

Evidence of power is more elusive in Sherald’s paintings. Her models
are black, and they are creatures of fashion who stand upright against
backdrops of pastel monochrome. In the past, Sherald has chosen her
subjects for their ineffable “quality of existing in the past, present,
and future simultaneously,” her gallerist Monique Meloche has said; it
is true that, before one of Sherald’s figures, you think not about the
passage of time or the oppressive reach of the state. Instead, these paintings
make the viewer speculate about the quieter wants and wishes of the
black common men and women who have emerged on the linen en grisaille—Sherald’s taupe variant of grayscale—like ghosts.

At the Smithsonian unveiling, Michelle Obama and the forty-four-year-old
Sherald together pulled down brown wraps to expose a painting of
shocking mystery. It is a portrait of the first black First
Lady in an abundant gown, designed by one of her favorites, Michelle
Smith for Milly. Smith, in an interview with Vogue, has said that the dress’s “clean, minimal geometric print” is “without a reference to anything past or nostalgic” and is
“forward-thinking,” like Obama herself. But at the lectern, introducing
the six-by-five-foot “ ‘Michelle LaVaughn Robinson Obama,’ oil on linen,
2018,” Sherald said that the shapes reminded her of Mondrian, and the
diligent quilt-making of the black women artisans of Gee’s Bend,
Alabama. “My approach to portraiture is conceptual,” she said. Obama
herself emphasized that she did not come from the sort of family that
had had members sit for portraits. As a variation of the classical
American pioneer, she sought out Sherald to translate what being the
first meant to her.

The painting is shocking because Sherald has somehow conjured a vision
of Michelle Obama, one of the most photographed women in history, that
we have not yet seen—one free of the candid Washingtonian glamour found
in photographs such as those in Amanda Lucidon’s “Chasing Light: Michelle Obama Through the Lens of a White House Photographer.” Obama
sits against sky-blue oblivion, the triangular shape of the dress
turning her into a mountain. Sherald may be the portrait artist of
“American people,” and Obama, looking askance, leaning slightly, may
want to be a part of that record, but she is also a symbol, an
aggrandizement. The racializing schema of Sherald’s work is to “exclude
the idea of color as race,” she has said, in her artist’s statement. To
Sherald, the photorealistic depiction of race—a quality determined by
others’ eyes, externally—is a dead end. Applied to Michelle Obama, the lack of
brown in the skin feels first like a loss, and then like a real gain.
This is a different Michelle, a woman evacuated of celebrity, who
appears provisionally dreamlike, nearly a shadow. The mouth and the
eyes and the strong arms that we know are present, but fainter. From
some distance, I can imagine, the figure might not be immediately
recognizable.

To some, the lack of racial verisimilitude may be intolerable. And
yet this is how the subject would like posterity—young black girls
especially, she said in a speech—to see her, through Sherald’s vision: as a herald of success. In this way, Sherald wondrously troubles
assumptions about blackness and representation in portraiture. Looking
at it, I thought for a moment of Kerry James Marshall’s portraits,
especially his 1980 self-portrait, in which the artist depicts himself
as an actual black void, only eyes and teeth gleaming. The phantasmic grayscale of Sherald’s painting makes one work to bring its subject to
life—to remember what Michelle Obama has endured. From her husband’s
first campaign she was scrutinized, even more than her husband, who was
the one running—an appearance on “Larry King Live” had viewers nervous
about her stridency. She was exhorted, by worriers of all races, to be
soft. She had to give America fewer reasons to say ugly things, to make
ugly cartoons. It is undeniable that there was a shift in how she was
marketed. Commercials de-emphasized Michelle Obama’s legal career—in
fact, it was she who had mentored Barack, not the other way around—and
pushed her domestic identity as a mother. The tenure of the first black
First Lady was defined by her no-nonsense charm, her easy beauty, her
rhetorical gifts, her championing of healthy meals for the young and the
poor. She had a long-lasting emotional effect on millions of people. And
then she had to hand the baton to Melania Trump. One wonders what the sitter divulged to the portraitist, who has experienced her own trials—deaths in the
family, a heart transplant. One wonders how the years in the White
House—which, Michelle Obama reminded the country, had been built by slaves—affected her.

I think the portrait is one answer. It is an intensely private work of
art that will seem otherworldly in whichever state gallery hall it is
hung. “What have we done?” Michelle Obama has said she
asked her husband the first time she watched her two daughters leave the
White House for school, shadowed by a Secret Service army. In public
exit interviews, Michelle Obama is open about her relief that the eight
years is over. The portrait, beautiful and discomfiting, is like a
memory of what we never knew.