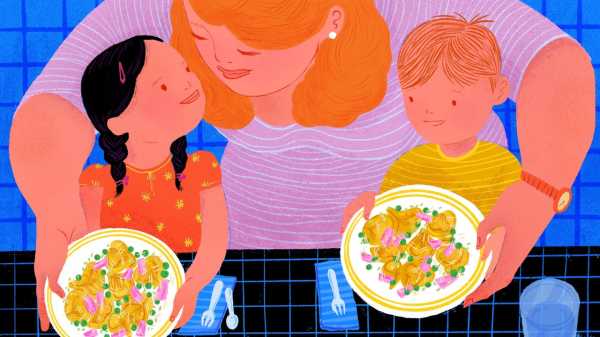 Most afternoons, around 4:30 P.M., a pair of words, separated by a comma and followed by an exclamation point, pops into my head; sometimes I say them aloud. The first, a profane four letters beginning with “F,” is not worth printing here. The second is “dinner.” It wasn’t always this way. In my twenties, dinner was the reason I got up in the morning: if I didn’t have plans to go out, I spent hours fantasizing about what to cook for the biggest meal of the day. Often, I had enough time for a post-work trip to the grocery store, to gather ingredients for some complicated recipe I’d never made before; sometimes I even entertained.

In my thirties, I had kids, two of them, about two years apart. They rise at dawn. I am extremely lucky to have full-time child care, and at 9 A.M. I begin a race against time to manage professional and household affairs without them underfoot. When they were newborns, dinner was pure sustenance: middling takeout from the closest place possible; supermarket prepared foods eaten while I stood in front of the fridge, with a baby strapped to my chest. But, when the younger child began to eat solids, and to go to bed at the same time as her older brother, a new ritual emerged. We started to eat a proper family dinner, the four of us sitting together at a table at around 5:30 P.M., not out of some moral panic (although the alleged benefits are an added bonus) but because it was what made the most logistical sense. The only thing that seems harder than cooking one meal for a group of four is cooking separate meals for two groups of two.

I genuinely would have no problem with my children eating chicken nuggets and frozen broccoli (both dipped in copious amounts of ketchup) for every meal, but it’s not what I care to dine on myself more than once in a while. I wanted a wide variety of dinners that were easy and fast to make, comprising mostly pantry or freezer staples and requiring minimal planning and preparation in advance. I wanted them to be deconstructed enough so that I could separate their components, in case the small dictators rejected a particular ingredient or two, as they are wont to do. And I wanted them to be exceptionally delicious, even exciting. I struggled. And then a cookbook came out, written by a young recipe developer named Ali Slagle. It was called “I Dream of Dinner (so You Don’t Have To),” which, speaking of dreaming, I felt I might have manifested.

The idea that cooking dinner can be a huge hassle for hardworking Americans, especially those who have young children, is retro—it’s the conundrum that got us the TV dinner—yet timeless. “Home Cooking,” a 1988 collection of essays and recipes by the writer Laurie Colwin, which has become a cult classic in the past decade or so, includes a rumination called “Easy Cooking for Exhausted People.” In it, Colwin writes, “A while ago I was a person who liked to have friends over for dinner, and now that I have a child I am someone who is responsible for three meals a day plus snacks. . . . Even if you love to cook, [it’s] enough to get a person down, especially if the person has anything else to do such as a pick a child up from school, write a novel, have time for such necessities as shopping, to say nothing of keeping up with friends and an occasional conversation with one’s mate.” She suggests having “under your belt a few really easy things that virtually cook themselves”: boiled beef, vegetarian chili, baked pears.

With no disrespect to any of Colwin’s recipes, more relevant to my current situation is an essay from her second collection, “More Home Cooking,” from 1993. In “Why I Love Cookbooks,” adapted from a talk she once gave to a culinary society, she writes, “There is nothing like a cookbook to explain to you how we used to live. If you want to know what real life used to be like, meaning domestic life, there isn’t anywhere you can go that gives you a better idea than a cookbook.” “I Dream of Dinner” is one of a number of easy-dinner-themed cookbooks that have been published in the past few years, joined by others this fall: this month, Melissa Clark followed her excellent “Dinner: Changing the Game” (2017)—the title of which bears a whiff of this era’s obsession with disruption and hacks, though it’s actually quite soulful—with “Dinner in One: Exceptional & Easy One-Pan Meals.” Ina Garten’s “Go-To Dinners” comes out in October. In 2016, the founders of Food52 published “A New Way to Dinner: A Playbook of Recipes and Strategies for the Week Ahead”; earlier this year, Lukas Volger released “Snacks for Dinner: Small Bites, Full Plates, Can’t Lose.” From America’s Test Kitchen, recently: “Dinner Illustrated: 175 Meals Ready in 1 Hour or Less” and “Five-Ingredient Dinners: 100+ Fast, Flavorful Meals.” I was somewhat horrified to learn of the term “dump dinners,” for Crock-Pot meals, as exemplified by books such as “Dump Dinners: 50 Easiest Crockpot Dump Meal Recipes for Busy People.”

More than any other, Slagle’s “I Dream of Dinner” seems to explain to me how I am living, right now, pegging me and my cohort as young urban professionals with unfettered access to specialty stores such as Sahadi’s and H Mart, or at least a willingness to shop for global pantry items online—the type who tries her best to eat local ingredients, in season, but also stocks up on organic frozen vegetables at Trader Joe’s. Some of Slagle’s recipes assume a certain worldliness on the part of the reader, but then dress it down: there’s a croque Monday (a simplified, open-faced monsieur), and a French onion white-bean bake (made with canned cannellini). A dish of blistered peppers with mozzarella and croutons is “like if romesco sauce”—a staple of Spanish cooking— “never got blitzed.” Other recipes riff on humbler concepts without seeking to elevate so much as celebrate and reimagine: sour-cream-and-onion fish; buffalo salad with blue-cheese toasts.

The book’s index is an encyclopedia of popular ingredients of the day (beans and farro, gochujang and tahini, cauliflower and chicken thighs) and an invitation to experiment with the perhaps untapped potential of others (prepackaged gnocchi, sushi rice, tempeh). If I pick up some vegetable or protein on a whim at my local Saturday Greenmarket, just because it looks good—frozen lamb kielbasa from the merino-wool farm, or a crimson head of Treviso radicchio—I can almost guarantee that I will find a use for it in “I Dream of Dinner” on a Wednesday, as I start to realize that the end of the day is looming and panic sets in. I’ve come to look at my pantry drawer full of neglected grains—a two-pound bag of bulgur purchased for a now forgotten, highly specific recipe, for instance—in a new light.

Slagle is generous with permission to break the rules in service of minimizing effort or maximizing pleasure, ideally both. Lentil soup goes “on Spring Break,” lightened up with snap or snow peas; baked pasta is made in a sheet pan so that every square is as crunchy as a corner piece; eggs for salad are hard-fried instead of hard-boiled. She is playful with words: olive-oil-braised chickpeas might “tumble over pasta,” and “smacked vegetables” get pounded with a rolling pin before they’re mixed with feta and dill. Each recipe is titled a bit like a magazine article, with a chatty subheading: “Charred Vegetables with Turmeric Peanuts: To keep sweet vegetables from cloying, burn them. A little.” I used that lamb kielbasa (plus farro, and prepared horseradish stirred into sour cream) to absolutely spectacular effect in her “Crispy Grains with Kielbasa & Cabbage.” (The subheading reads “Scandal: Stew ingredients escape pot, flee for ripple of heat under the broiler.”)

The ingredients and instructions, too, are structured in an unusual fashion, as Slagle explains in her introduction: “Instead of hiding work in an ingredient list—did you know ‘½ cup toasted, chopped, skin-off hazelnuts’ takes half an hour?—there’s a grocery list to scan. When you’re ready to cook, bring the ingredients to the counter and follow along: All the prep happens in the recipe itself.” This means that all of the recipes actually fulfill her promise to take no more (and often significantly less) than forty-five minutes, ranging from dishes as simple-sounding as “Tortellini with Mortadella & Peas” (an instant family favorite) to the seemingly elaborate “Sticky Chicken with Pickled Vegetables,” for which you (quick) pickle the vegetables yourself, and also make sushi rice.

When my family got COVID last spring, passing it around on a staggered schedule that left us without child care and grandparent visits for weeks, the book became a bit of a lifeline. I whipped up “B.L.T.” stir-fry—“T” as in “tofu” instead of “tomato,” crisped and tossed in a pan with romaine lettuce and chopped bacon. I buttered quinoa (the only way I’ll ever eat quinoa again), following her instructions to combine it with shelled edamame and bok choy. I made “Forager’s Pasta,” dense with mushrooms and chickpeas, so named for Slagle’s suggestion to forage in your cupboards for several heady, comforting seasonings from a broad list: I chose fresh-cracked black pepper, whole fennel seeds, a stick of cinnamon, and bay leaves. Another thing I love about the book, a feature I am noticing more and more in cookbooks these days (see: Carla Lalli Music’s wonderful “Where Cooking Begins”), is the inclusion of ingredient substitutions with almost every recipe.

I’m in full support of the ethos behind the David Chang-popularized term “ugly delicious”—the idea that it’s generally more important for food to taste good than it is for it to look good—and I’m mostly repulsed by the idea of “doin’ it for the ’gram,” as in Instagram, especially when it comes to food. Still, I have always enjoyed the aesthetics and theatre of a meal, and I find that cooking something that’s as beautiful as it is delicious can be a real mood booster. The night I made the recipe from the cover of “I Dream of Dinner”—“Turmeric Shrimp with Avocado & Citrus: California dreamin’ ”—I was stunned to find that it turned out looking identical to the photo, almost as stunned as I was by how readily my three-year-old gobbled it up with his hands. I posted a picture as an Instagram story, with a caption that said as much. Fellow parent friends flooded my in-box, eager for the name of the book, and for a dinner dreamed up by someone else.

Adapted from “I Dream of Dinner (so You Don’t Have To),” by Ali Slagle.

1. Make rice. In a medium saucepan, bring sushi rice, 1¼ cups water, and ½ tsp. salt to a boil. Cover, reduce the heat to the lowest setting, and cook until rice is tender, 12 to 15 minutes. Remove from heat and keep covered.

2. Cut tofu lengthwise into ½-inch-thick slices, then cut each piece crosswise into thirds. Wrap in paper towels to dry. Transfer to a medium bowl and toss to coat with cornstarch and ½ tsp. salt. In a measuring cup, stir together soy sauce, rice vinegar, maple syrup, and a few grinds of black pepper.

4. In a large nonstick skillet, heat 1 Tbsp. neutral oil and bacon over medium. Cook, stirring sometimes, until bacon is golden brown, 5 to 7 minutes. Transfer to a paper-towel-lined sheet pan. Hold on to the skillet, leaving the fat behind.