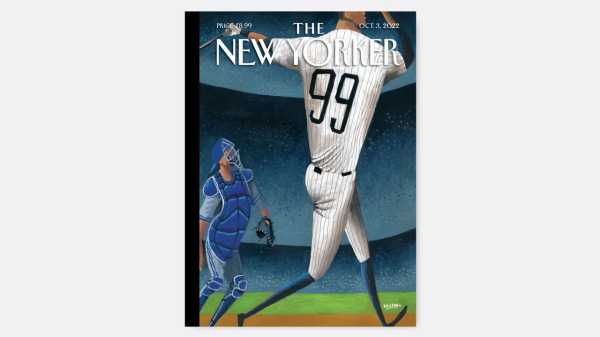 On Tuesday, September 20th, Aaron Judge, the Yankees’ six-foot-seven-inch star outfielder, hit a home run deep into the left-field bleachers. It was his sixtieth of the season. Only Babe Ruth and Roger Maris have reached that number in the history of the American League. (Maris holds the record at sixty-one, but for how long?) Mike Kessler, the twenty-year-old fan who caught the ball, in a move that caused one sportswriter to dub him the “purest baseball fan alive,” gave it back to Judge, free of charge. It was Judge’s story, he said. He told the gathered reporters that he had only one thing to ask of the player, who becomes a free agent next season: “Try anything to come back next year. You’re the heart and soul of the ball club.” For the cover of the October 3, 2022, issue of The New Yorker, Mark Ulriksen celebrates Judge’s remarkable achievement. I recently spoke to the artist about his love of baseball.

When did you start paying attention to Aaron Judge?

As a diehard baseball fan, it’s hard to miss Aaron Judge. He’s so dynamic, exciting, and huge! He’s a true superstar. His at-bats are a must-see. Judge gets a lot of attention here in San Francisco because he grew up a Giants fan in the Central Valley, and he’ll be a free agent after this season. Every team in baseball would love to sign him. You were looking forward to drawing him. What about his build is so interesting?

It’s not often I get to caricature a six-foot-seven-inch, two-hundred-and-eighty-pound athlete. By cropping his feet and face, and juxtaposing him with a standard-size baseball player—who are big themselves—I was trying to convey his size. He’s one of the biggest position players in the long history of the game.

What makes baseball interesting to you as an artist?

Baseball has always been my favorite sport, perhaps because I grew up playing it. It’s a sport full of talls and smalls; the players are all unique. This applies to baseball-stadium architecture, as well. Can anyone tell the difference between one basketball arena and another? No. But Yankee Stadium is so different from Fenway Park.

How do you represent action in a single image?

I’ve always been attracted to suspended animation, to capturing movement frozen in space. Athletes also have distinctive ways of plying their craft. A pitcher’s motion might be instantly recognizable to fans, just as Judge’s swing is distinctively his.

Do you collect snapshots and spend time sketching people you find interesting, or do you like to rely more on your imagination?

When I started out as an illustrator, after a career in graphic design, I only drew from my imagination. Then an art director told me my characters were ugly and off-putting. Ever since, I’ve relied on photo references. I have files of photos clipped from periodicals and organized into various categories: walking, sitting, standing, handshakes, kisses, and so on, as well as baseball, basketball, soccer, football, and more. I sketch people when I attend music festivals—which I do a lot—but the sketches are always the same, a bunch of interesting, anonymous folk drawn from behind.

Have you ever been to a game at Yankee Stadium?

A couple of weeks ago, my wife, Leslie, and I took a brief vacation in Manhattan, and I took in my first game at the new Yankee Stadium. We were both very impressed—and my wife is not a sports fan at all. We loved how you can circle the stadium during the game and see the field from all sorts of perspectives. We sat with the fun and loud Bleacher Creatures. We loved how the grounds crew led the crowd in dancing to “Y.M.C.A.” It was a great experience.

The artist at a Yankees game, celebrating a Grand Slam. Photograph by Leslie Flores.

For more baseball covers, see below: 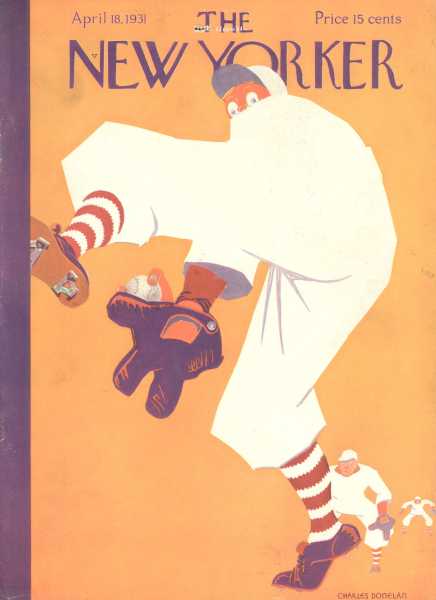 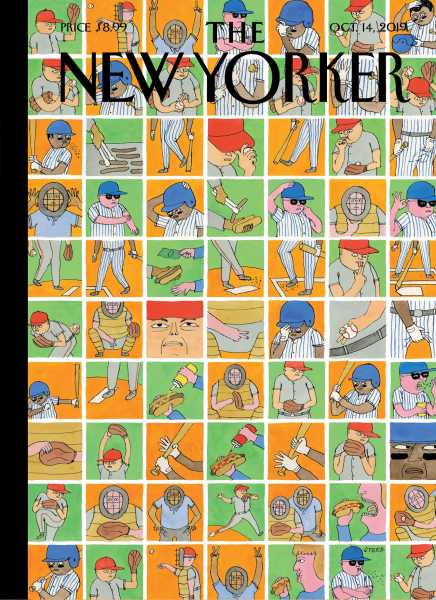 “Inside Baseball,” by Edward Steed