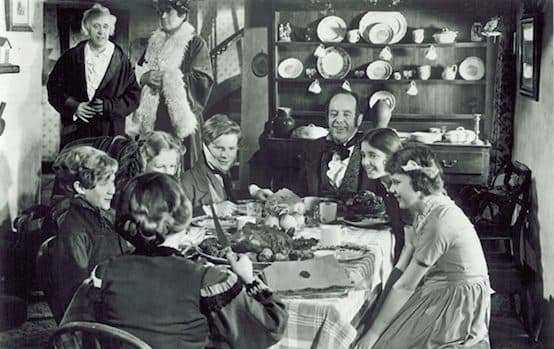 While you are here…For the last 15 years, our magazine has endeavored to be your refuge from the nasty partisan politics and Washington echo chamber with thoughtful, smart conservatism, fresh and challenging writing, and authors who, above all, bravely hew to our most basic tenets: Ideas over ideology, principles over party. Please consider a tax-deductible, year-end contribution so that TAC can make an even bigger difference in 2018!

During the second week of Advent, my wife and I enjoyed a charming stage adaptation of Charles Dickens’ A Christmas Carol at Atlanta’s Shakespeare Tavern. Director J. Tony Brown’s fresh yet faithful adaptation is now a local institution, enjoying continued success for the 15th consecutive December.

The rapid rotation of the cast through the role of narrator features the author’s masterful prose, as their passing across the floor from a variety of directions simulates the bustle of old London-town. A medley of traditional English carols, sung beautifully in a folk style, adorns the production with the spirit of a Victorian Christmastide. The show certainly pleased one nostalgic young critic in a high school group seated behind us, who remarked with wistful approval as the final lights came up: “That was great—I haven’t seen that movie in so long!” She was referring, presumably, to Jim Henson’s Muppets’ Christmas Carol—for which I must confess my own appreciation, lest I be accused of Philistinism. But my wife and I know and love the novella even more so, having read it aloud together most Christmas Eves for the last decade. We return to A Christmas Carol annually not only for its sentimental value and literary richness, but for its sacred themes—nonetheless profoundly Christian despite the reformist author’s evasion of any direct personal reference to the season’s “mighty founder.”

Apparently the deeply religious ethos of this story is not clear to all, its titular invocation of a holy season notwithstanding. The director’s program notes list among patrons’ three most asked questions: “Why did you put in so many religious references?” I am unsure whether the question indicates common ignorance of Christian liturgy’s pervasive influence in 19th-century England, or 21st-century theatergoers’ expectation that contemporary directors should redact all such subject matter where possible. Mercifully Brown has refused to do so, instead offering a production richly evocative of the religious ethos that alone vivifies and renders comprehensible Dickens’ narrative.

In this vein, the production captures with especially moving clarity the homely grace of Bob Cratchit’s Christmas feast. The fare laid on by the penurious patriarch—underpaid bookkeeper to the uncharitable protagonist, Ebenezer Scrooge—is implicitly meager. The slender goose, “eked out by apple-sauce and mashed potatoes,” stretches to a just “sufficient dinner for the whole family.” Yet Cratchit’s goodly wife conjures a meal whose “tenderness and flavor…[are] the themes of universal admiration,” and which prompts Bob to declare his disbelief that “there ever was such a goose cooked.” When the able matriarch follows her roast with the traditional Christmas pudding, brandy-soaked and flaming, Bob playfully declares it the “greatest success…since their marriage.” Full to bursting with admiration, if not quite with an abundance of food, the clerk’s acclamations echo those given to the biblical “excellent woman” whose “husband praises her: ‘Many women have done excellently, but you surpass them all.’” (Proverbs 31:29) The children in turn join their father in this praise, none daring to say much lest anyone think “it was at all a small pudding for a large family. It would have been flat heresy to do so.” Though poor in material things, the Cratchits’ home abounds in love, each being “happy, grateful, pleased with one another, and contented with the time.” In the words of biblical adage: “Better is a dinner of herbs where love is than a fattened ox and hatred with it.” (Proverbs 15:17)

The only dark clouds that briefly overshadow this domestic contentment follow Cratchit’s proposal of an after-dinner toast in honor of his cheerless master: “Mr. Scrooge, the Founder of the Feast!” The hitherto gentle matriarch indignantly refuses, wishing instead to “give [Scrooge] a piece of my mind to feast upon.” Mrs. Cratchit’s perhaps preternaturally forbearing husband admonishes her to be mindful of their children and the day, to which she responds curtly that “It should be Christmas Day, I am sure, on which one drinks the health of such an odious, stingy, hard, unfeeling man… You know he is, Robert!” In the abstract, Mrs. Cratchit’s righteous anger reflects the divine economy of a God whose prophet castigated ancient Israel for offering hollow worship even as “you seek your own pleasure and oppress your workers.” (Isaiah 58:3) Yet Mrs. Cratchit’s outrage goes beyond the social reformer’s principled alienation. It is the vicarious jealousy of an adoring lover. The insulting personal injustice toward her husband stings more than the general violation of divine decree. Her wifely affection has all the warmth and totality of the biblical lover who declares: “As an apple tree among the trees of the forest, so is my beloved among the young men. With great delight, I sat in his shadow; his fruit was sweet.” (Song of Solomon 2:3-4)

Though he does indeed know the truth of his wife’s words, Cratchit returns only an exhortatory and “mild answer: ‘My dear, Christmas Day.’” The dutiful wife replies that she will “drink [Scrooge’s] health for your sake and the day’s… Not for his!” Bob is not only lover and friend, he is the governor of his household, embodying the Pauline command for husbands to “love your wives, as Christ loved the church and gave himself up for her, that he might sanctify her.” Consequently, Mrs. Cratchit adheres to the apostle’s accompanying admonition that wives “submit to your own husbands, as to the Lord” (Ephesians 5:22 & 25-26). Thus, the family drinks the toast, yet it is “the first of their proceedings which had no heartiness.” Unlike the sanctifying Cratchit, whose earlier arrival home from morning prayers instantaneously inspired mirth, “Scrooge was the Ogre of the family. The mention of his name cast a dark shadow on the party, which was not dispelled for full five minutes. After it had passed away, they were ten times merrier than before, from the mere relief of Scrooge the Baleful being done with.”

Scrooge is the baleful ogre of this otherwise joyous household on account of his uncharitable heart. While Christmas recalls that upon “those who dwelt in a land of deep darkness, light has dawned” (Isaiah 9:2), Dickens wrote of his miserly protagonist: “darkness is cheap, and Scrooge liked it.” When men collecting for an eleemosynary pauper’s relief fund call at his counting house, Scrooge inquires acerbically whether the tax-funded workhouses remain open. Assured that they are, he proclaims: “I don’t make merry myself at Christmas, and I can’t afford to make idle people merry. I help to support the establishments I have mentioned—they cost enough—and those who are badly off must go there.” Not only could Scrooge materially afford to make others merry, Dickens’ morale is that in the divine economy of eternity he could not afford to refuse. After traveling his spectral Damascus Road, the penitent moneychanger pledges such a sum to the fund that the gentleman replies: “‘Lord bless me!’ …as if his breath were gone. ‘My dear Mr Scrooge, are you serious?’ ‘If you please,’ said Scrooge, ‘Not a farthing less. A great many back-payments are included in it, I assure you.’”

What drives this transformation? The underlying change in Scrooge is not charity—that is the bounteous fruit, the root of which is gratitude. At the outset of the tale, Scrooge lacks no riches, yet counting all as his due he grasps without satisfaction for more. Cratchit’s 15-shilling weekly pay, in contrast, barely stretches to a meager festive bird. Nonetheless he returns to his undeserving employer gratitude rather than accusation or contempt. The psalmist proclaimed: “the LORD upholds all who are falling and raises up all who are bowed down. The eyes of all look to you, and you give them their food in due season. You open your hand; you satisfy the desire of every living thing.” (Psalm 145:14-16) Thus in faith, Cratchit fulfills the apostle’s command to “not be anxious about anything, but in every situation, by prayer and petition, with thanksgiving, present your requests to God.” For those who do, “the peace of God, which transcends all understanding, will guard your hearts and your minds.” (Philippians 4:6-7) Though his wages barely keep rapacious wolves from his door, Cratchit’s heart is a fortress. The true founder of his feast is not Scrooge, but God: it is he to whom the pious man returns thanks in his toast.

The Cratchits’ home, crowned with the glory of a mother’s and father’s mutually sacrificial love and devotion, is a scene of transcendent beauty and truth. Do bestselling authors or major filmmakers depict such scenes today? Can we imagine the like appearing in pop culture in our age of grievance-based identity politics, entitlement, and recrimination? Where could we find such an upliftingly profound depiction of romantic love as a life of mutual submission and service? Such is the heritage of Christian doctrine and culture; it is alien to our contentious, clamoring time of material abundance amid spiritual dearth. Alas!

Samuel Negus hails from England and is a history teacher at Atlanta Classical Academy in Atlanta, Georgia.

All of us at TAC wish you a Merry Christmas holiday and the best wishes for 2018. Our 501(c)(3) depends on your generosity to make the biggest impact possible. Please consider your tax deductible donation to our magazine, here. Thank you!