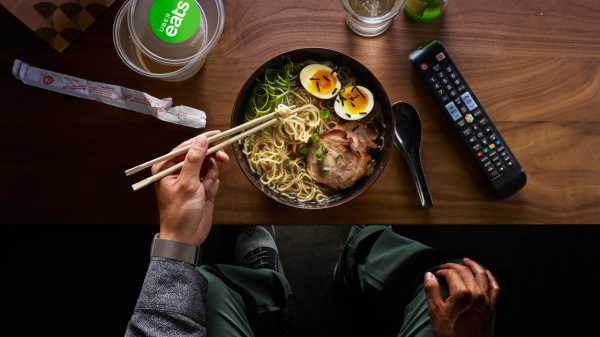 When Michelle Gauthier opened Mulberry & Vine, in 2013, so-called
fine-casual restaurant chains like Sweetgreen and Dig Inn had not yet
blanketed New York City in grain bowls and kale-Caesar salads. Gauthier,
who lives in Tribeca, wished that there were somewhere other than the
salad bar at Whole Foods Market to go to for a quick, healthy meal. She
opened Mulberry & Vine’s first location in her neighborhood, followed by
two additional branches farther uptown. On a recent day in January, the
Tribeca outpost was crowded with young women, and a few men, drinking
coconut-infused waters and eating bowls of organic romaine lettuce
topped with items like turmeric-lemon cauliflower, charred avocado, and
roasted salmon. Brown-paper bags sat in rows next to the cash register,
awaiting couriers for delivery. Mulberry & Vine meals are ubiquitous
inside the corridors of Goldman Sachs, located a few blocks away; its
entrées have appeared on lists of popular orders from Uber Eats, the
food-delivery wing of the ride-hailing giant. When the restaurant first
opened, it didn’t offer delivery at all. Now delivery orders account for
around thirty per cent of its sales.

To an outside observer, Mulberry & Vine looks like a
twenty-first-century restaurant success story. In recent years, online
platforms like Uber Eats, Seamless, and GrubHub (which merged with
Seamless, in 2013) have turned delivery from a small segment of the
restaurant industry, dominated by pizza, to a booming new source of
sales for food establishments of all stripes. When the average consumer
logs in to the Caviar app to order a Mulberry & Vine salad for the
office or a grain bowl on the way home from work, she might reasonably
assume that her order is benefitting the restaurant’s bottom line. But
Gauthier, like many other restaurant owners I’ve spoken to in recent
months, paints a more complicated picture. “We know for a fact that as
delivery increases, our profitability decreases,” she said. For each
order that Mulberry & Vine sends out, between twenty and forty per cent
of the revenue goes to third-party platforms and couriers. (Gauthier
initially had her own couriers on staff, but, as delivery volumes grew,
coördinating them became unmanageable.) Calculating an order’s exact
profitability is tricky, Gauthier said, but she estimated that in the
past three years Mulberry & Vine’s over-all profit margin has shrunk by
a third, and that the only obvious contributing factor is the shift
toward delivery. “I think it’s a far bigger problem than a lot of
operators realize,” she told me. “I think we are losing money on
delivery orders, or, best-case scenario, breaking even.”

In 2016, delivery transactions made up about seven per cent of total
U.S. restaurant sales. In a research report published last June,
analysts at Morgan Stanley predicted that that number could eventually
reach forty per cent of all restaurant sales, and an even higher
percentage in urban areas and among casual restaurants, where delivery
is concentrated. Though the cost of doing business through third-party
ordering services is steep, companies like GrubHub maintain that the
revenue they bring restaurants is “incremental”—the cherry on top, so to
speak, of whatever sales the place would have done on its own. They also
argue that delivery orders are a form of marketing, exposing potential
new customers who might convert to lucrative in-restaurant patrons. The
problem is that as consumers use services like Uber Eats and Seamless
for a greater share of their meals, delivery orders are beginning to
replace some restaurants’ core business instead of complementing it. (In
the Morgan Stanley survey, forty-three per cent of meal-delivery patrons
said that the meal replaced one they would have eaten at a restaurant.)
And, as delivery orders replace profitable takeout or sit-down sales
with unprofitable ones—ostensibly giving restaurants business but
effectively taking it away—the “incremental” argument no longer holds.
“It’s total bullshit, and you can quote me on that,” Justin Rosenberg,
the C.E.O. of the Philadelphia-based fast-casual chain Honeygrow, told
me. “I’ve spoken to C.F.O.s of bigger fast-casuals, and they’ve said the
same thing.”

For a sense of why a thirty-per-cent delivery-service charge is so
problematic, consider that in the restaurant world, notorious for its
slim profit margins, an industry-standard budget apportions thirty per
cent of revenue for the cost of ingredients, thirty per cent for the
cost of labor, and the remainder for “everything else”—rent, utilities,
insurance, supplies, credit-card fees, and profit. One way of solving
this equation might be to retool the basic restaurant business model to
better suit the demands of delivery. That’s what the chef David Chang,
of Momofuku, and the venture investor Hooman Radfar attempted to do with
Ando, a fast-casual restaurant that they founded, in 2016, as a
delivery-only experience. The plan sounded simple: a production kitchen
on Fourteenth Street would make sandwiches, salads, and such, and Ando
would sell them exclusively as delivery orders through a proprietary
app; all the costs of running a dine-in restaurant—front-of-house staff,
décor, pricey real estate in a desirable location—would be eliminated.
After a little more than a year, though, Ando scaled back this initial
vision, giving the kitchen a conventional retail façade so that patrons
could also order takeout. Around that time, I spoke to the restaurant’s
C.E.O., Andy Taylor. He said that no matter how much he was able to save
by forgoing a traditional dining room, the cost of delivering food was
too high, in part because he anticipates courier costs increasing as a
result of rising minimum wages and a historically tight labor market. “I
don’t think a pure delivery model can be profitable,” Taylor said. Last
month, Ando ceased operation, and a note on its Web site announced that
its team and technology had been acquired by Uber Eats.

Large chains or venture-backed endeavors like Chang’s Ando can afford to
undertake such experiments. At Sweetgreen, for instance, forty per cent
of orders are now placed for pickup through a proprietary app, and the
company is about to pilot a delivery service. It is small businesses,
which lack the leverage to negotiate third-party fees, or the resources
to adapt their facilities, that are made most vulnerable by delivery’s
growth. A representative for Curry-Ya, a Japanese restaurant in Harlem
that has become one of my favorite spots for delivery, told me that
“sometimes it seems like we’re making food to make Seamless profitable.”
At the same time, she said, “it's really becoming a bulk part of our
business, so it’s not something we can cut.” Another New York restaurant
owner told me that a colleague described delivery as “like crack
cocaine,” an income stream that his business had become dependent upon
but that might ultimately be running them into the ground. Many of the
restaurant owners I spoke to knew that their percentage of deliveries
was rising along with their costs, but they were unsure of how that was
affecting their profitability. “We kind of think that it all balances
out, but, honestly, we don't know,” Tom Birchard, the owner of the
popular Ukrainian restaurant Veselka, which has been serving late-night
borscht and pierogi to East Villagers for more than sixty years, told
me. “We don’t have the capacity to really analyze the economics of it
carefully. We’re in the dark.”

It’s worth noting that, even while charging restaurants steep rates,
most delivery platforms are not yet profitable, either. Their hope is
that order volumes will one day become high enough—and couriers will
deliver enough orders per hour—to push them into the black. To that end,
some of them are moving to reshape the restaurant industry from within.
Uber hasn’t revealed its plans for Ando’s team and technology, but
another of the company’s
initiatives is
nudging restaurants to embed “virtual restaurants” inside their
kitchens—picture a burger joint housing, at Uber Eats’s behest, a cookie
company that exists only as a menu on the delivery provider’s site.
DoorDash, an Uber Eats competitor, has started to
experiment with
leasing remote kitchen space to restaurants so that they can expand
their delivery radii. If such practices catch on, it’s easy to imagine a
segment of the restaurant economy that looks a lot like, well, Uber,
with an army of individual restaurants designed to serve the needs of
middle-man platforms but struggling to make a living themselves.
Michelle Gauthier, of Mulberry & Vine, told me that such a system would,
for one thing, preserve little of what drew her to the restaurant
industry in the first place. “Having a delivery-only business that’s
soulless and lifeless and just about production?” she said. “Personally,
I have no interest in that.”