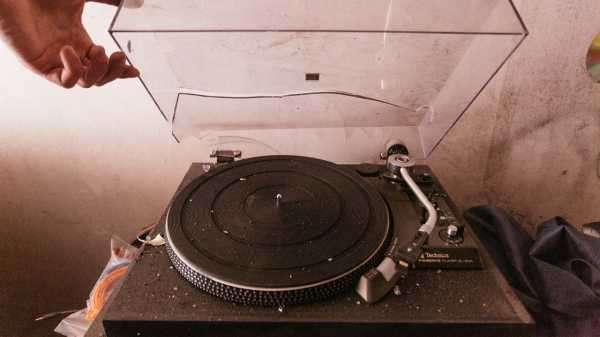 Nikita Zhemerenko was born and raised in Kharkiv, Ukraine, by a single mother who worked as a nurse. She was protective and doted on her only son, giving him, in his estimation, “too much time.” Nikita looked forward to the weekends, when the two would visit his grandmother on the outskirts of the city and he could spend time exploring outdoors with his friends. “I felt a real freedom there,” he told me.

It was the mid-two-thousands, and most of Nikita’s classmates at school listened to American hip-hop. Those who listened to local Ukrainian or Russian pop were considered “goofy.” When Nikita was twelve, a family friend played him a cassette of the German industrial-metal band Rammstein, and he felt as though he’d discovered a new sound, one that was primal and heavy, which spoke to him more than whatever was popular among his peers. He never wanted to give it up. During a visit to his grandmother’s house, he met a kid, named Vlad, who also liked Rammstein. Their friendship was built on dares to see who was willing to climb up the tallest chimney, or walk the farthest onto a frozen lake. Nikita taught Vlad how to smoke, and Vlad taught Nikita about music. 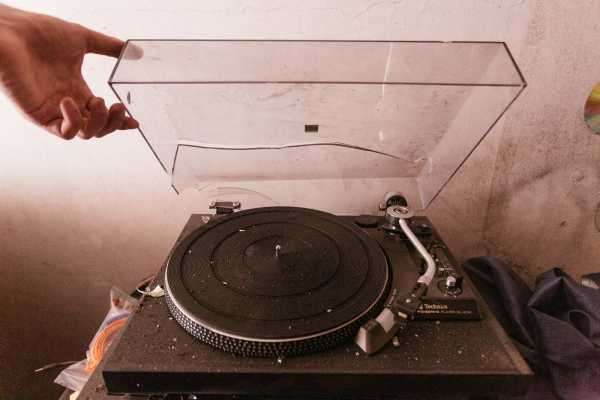 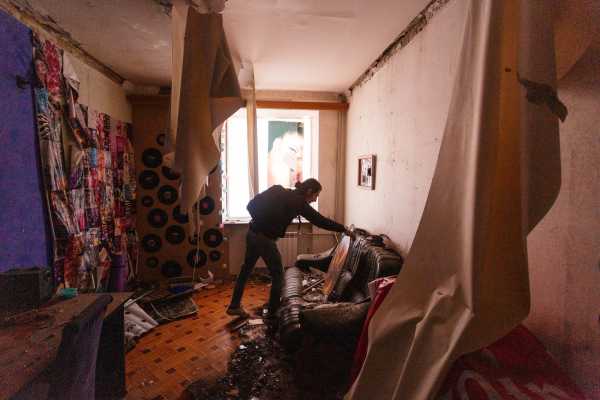 “Vlad is a very emotional person,” Nikita, who is now thirty, said. Vlad introduced him to bands such as Nirvana and Slipknot. When they listened to System of a Down, he remembered that Vlad “could not stand or sit still.” He would shake his head and sing along as best he could. The pair replayed “Chop Suey!” for hours, even though they could barely make out Serj Tankian’s lyrics. “I experienced these feelings inside,” Nikita said.

Back then, he noted, “American music was something far away from us. We did not understand the words, but we loved her madly.” All that mattered was finding new music, and Nikita, Vlad, and their metal-loving friends traded CDs and cassettes. When he was fifteen, Nikita persuaded his mom to buy him a guitar, and he taught himself how to play and build the instrument by watching YouTube tutorials.

He was happy with his MP3s and bootleg CDs. But he dreamed of building a proper collection. A couple years ago, he saved up and bought himself a turntable and the first LP by the Russian rock band Aquarium. Over the following years, he would document his growing record collection and the life he shared with his girlfriend, Lisa, on his Instagram account. The couple decorated their apartment in Kharkiv with strings of colorful lights, garlands, candles, glittery ribbons, and Lisa’s photos. Their home was filled with music—not metal, which Lisa, a graphic designer, hates, but more soothing music by Sade and Sting. Earlier this year, Nikita began renting a small workshop nearby, where he built guitar cables and balance boards. He had hopes of becoming an accomplished woodworker and constructing his own guitars. And then, one morning in late February, he woke to the sound of explosions.

I began e-mailing with Nikita—who goes by Nick—in June after meeting him through eBay. One of the many things I collect is bootleg cassettes with alternate, often amateurish, artwork, and for a few years I’ve had a series of saved searches on the online marketplace for unofficial Nirvana tapes from various countries in Eastern Europe. I noticed a listing for an LP that read “Nirvana ‘The Best’ LP survived after AIRSTRIKE from Kharkiv, UKRAINE. For help.” There were pictures of the LP, as well as Nikita’s bombed-out apartment. In the item description, he explained that he was selling some of his LPs, guitar pedals, and cables for money to rebuild his home and contribute to the war effort. At first, my curiosity involved the logistics of fulfilling eBay orders during wartime, my sympathy for a collector letting go of his prized possessions. We got to talking about our common love of music, and the way certain songs made us feel. Our conversations opened into other vectors of experience and, in his case, dreaming. 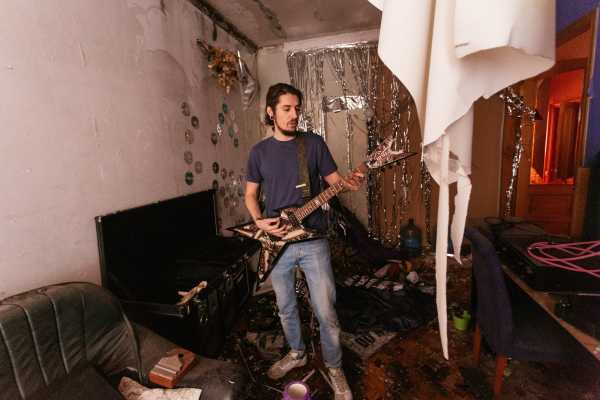 Nikita, a fan of American music since his adolescence, learned to play and build guitars from watching YouTube tutorials.

Nikita and Lisa took their pets and fled their home in Kharkiv on February 24th. They were going to be with Lisa’s family, hoping that their home, farther from the city center, would be a safer place to stay. Nikita planned to return to their apartment a few days later, but the intensifying attacks convinced the couple that they should leave the city altogether. The two were on their way to Lviv, where some of Lisa’s other relatives live, when neighbors in Kharkiv sent a video of their building on fire. “I imagined how our photos, records, and all these little things that made up our house were burning,” Nikita wrote in an online journal. The couple’s journey, by bus, took two and a half days, during which time they slept wherever they could.

As he settled into life in a new city, Nikita listened to the English rock band Placebo’s 2021 single “Surrounded by Spies” a lot. The song, ostensibly about surveillance and paranoia, took on a new meaning for him, becoming his soundtrack for those early weeks of the war. Vlad, still in Kharkiv, told him about a new Rammstein album, but Nikita hasn’t had a chance to hear it yet. He’s sought comfort in old favorites. He recalled, feeling especially homesick one night, listening to Nirvana and feeling energized: “I was once again convinced that only with music I can go through such hard times.” Whenever he needed to calm down and envision a “future life,” he turned to Pink Floyd. “I realize that I love music and musical instruments more than anything in the world,” he wrote. 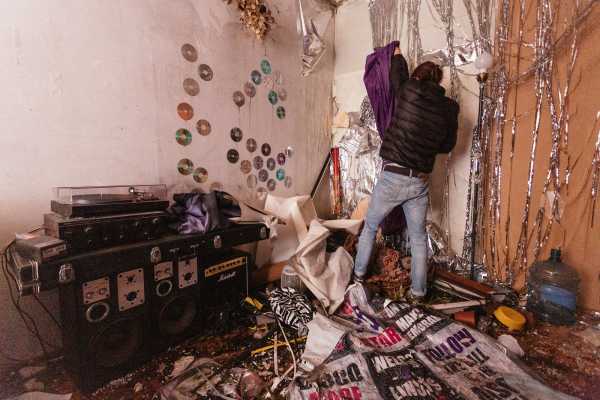 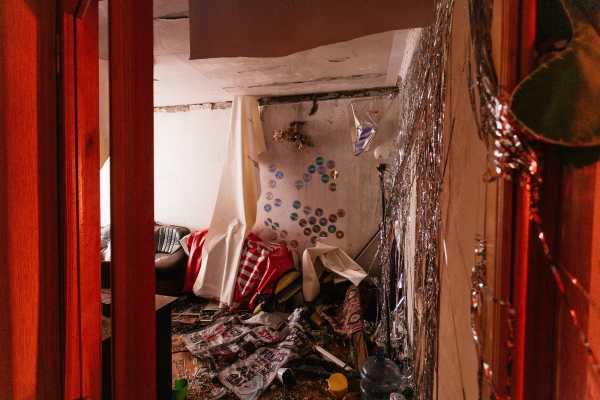 Nikita returned to Kharkiv for the first time in mid-April. At his old apartment, he picked up photos that were scattered across the floor, rehung a painting that had been knocked from a wall, and grabbed his records, covered in dust and debris, to leave with a friend who would clean and ship them to him in Lviv. “Time seemed to stop,” he wrote. “I looked at the things that made up the soul of our house.” He met his friends in a park, where they drank green tea and talked about how much their lives had changed. The following day, the park was bombarded with rockets.

“It’s very strange,” Nikita told me over Zoom earlier this summer. “Getting used to normal life.” His hair was tied in a topknot, and his gauge earrings swung whenever he turned from his laptop’s camera to a translation app he was using to help with his answers. He learned English about five years ago, thinking he might one day work on a cruise ship. His weary, sunken eyes would brighten each time I asked something he knew he could answer without consulting the app. He recently learned that his neighbor in Kharkiv was killed in a bombing, and posted a wordless video on Instagram surveying the wreckage in his old apartment building. “I do not speak English on videos,” he told me, “but you can understand the mood without my comments.” 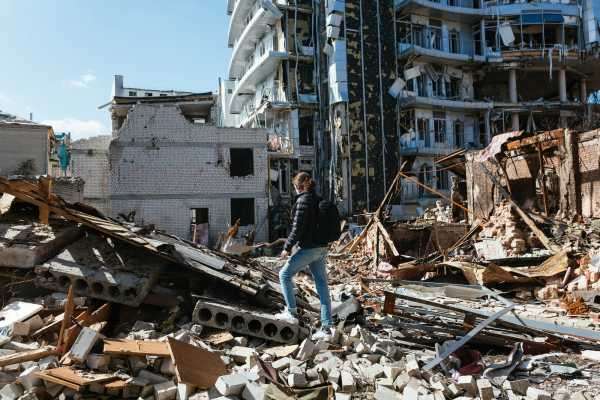 Nikita in the wreckage of his neighborhood in Kharkiv, Ukraine.

These days, Nikita, Lisa, and their pets are living in Kyiv, where, he said, “the war is felt much closer.” He dreams of working in a guitar factory in the U.S., and of helping to rebuild Kharkiv, where his mother and grandmother still live. The eBay auctions have offered a productive distraction. When we began writing to each other, nobody had bid on his LPs yet, but there were a few buyers interested in his gear. He described the decision to sell his things as difficult yet necessary: at least his records and gear now might have a second life in someone else’s home. “The pedal sounds amazing. Black sabbath sound,” the description of an old Pig Hoof fuzz pedal read. “You will feel the sound of a fighter from your guitar. . . . I did not clean up the traces of dust after the bombing. Let this be your memory. It is up to you to decide whether to clean it or leave as is.” ♦