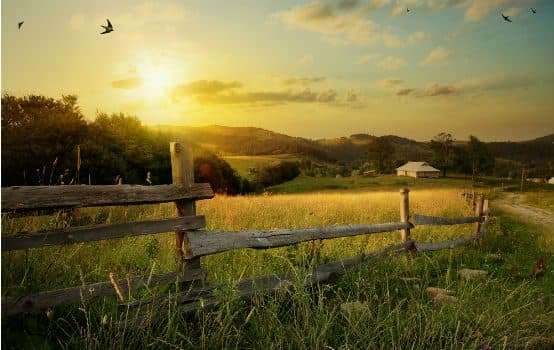 Our world is full of wrath and bombast: bickering politicians, Facebook quarrels, tempestuous wars, cultural schisms. Amid this vitriol, it can be easy to lose hope, to look for peace and find none.

Fortunately, history can offer comfort and conviction. It reminds us that we’ve been here before: experienced similar fractures and divisions, committed comparable sins against humanity. History, too, can show us shining examples of hope in turmoil, proffering up individuals and communities that stand out like beacons amidst the pitch-black darkness of their time.

Philip Britts was one such beacon. He was a farmer, pastor, and poet during World War II, a steward of place and soil, a caring father and husband, and a zealous advocate for peace and community. Born in 1917 in Devon, England, Philip felt an early calling to the earth and its stewardship—a calling that stands out in one of his earliest poems, penned when he was 20 years old:

I stood in flowers, knee high,

Dreams, in the promise of a shining sky

That I should make a garden from a wilderness;

I would subdue the soil and make it chaste,

With my own strength I would redeem the waste,

Would grow the lily where the thistle stood.

…Had I not dreamed so long,

Not dreamed of so much beauty, or such grace,

Mayhap I could have trod a quieter path,

With other men, in a green, quieter place.

Those final lines are practically prophetic: Philip Britts would go on to live a life of exile and hardship, one that would send him to an early grave at age 31. Water at the Roots, a short new book from Plough Quarterly (the publishing community of the Bruderhof), stands as a testament to his remarkable life, the fruit of his mere three decades on the earth, and the vision that his poetry, essays, and sermons inspired.

Philip graduated from the University of Bristol with a degree in horticulture in 1939, and became a fellow of the Royal Horticultural Society. He married his childhood sweetheart, Joan, shortly thereafter. Philip was a staunch pacifist, and believed that his Christian faith barred him from military action. But as German troops marched into Poland that September and Winston Churchill called his countrymen to action, pacifism became an increasingly unpopular position in the United Kingdom.

It was around this time that Philip and his wife learned of the Bruderhof, a community of Christian believers founded in Germany in 1920, who dedicated themselves wholeheartedly to Jesus’s words from the Sermon on the Mount and to the example of the early church in Acts. They held property in common, and worked together to provide for all members of the community. Hitler had exiled the community from Germany in 1937, and they had fled to Cotswold, England, resuming their communal life there.

After journeying to meet the Bruderhof and observe their work, Philip and Joan were determined to join them. They sold their house, left behind family and friends, and moved to Cotswold in 1939, becoming official members of the Bruderhof the following year. Philip worked with the other Bruderhof men in the fields and vegetable gardens: ploughing, harrowing, seeding, and harvesting. The poetry he wrote at the time contains a tangible joy and zeal, a sense of calling found and fulfilled.

But this period of tranquility was short-lived. As World War II progressed, the English government declared that Germans and Austrians age 16 and older had to appear before special tribunals, and many were placed in internment camps. If the Bruderhof wanted to remain together, they could not stay in England. They began searching for a new home country, one that would allow them exemption from military service and freedom of religion. Through the help of local Mennonites, the Bruderhof found an abandoned farm in Primavera, Paraguay, and were granted exit permits to leave England. They sailed across the Atlantic and toward an unknown future.

Their transplanting was not easy. The community struggled to find the best and most adaptable plants to grow in this new soil and climate, and suffered from malnourishment and insufficient food at various times. Under such circumstances, Philip’s knowledge of horticulture became invaluable. He determined new crops for their community, working in both field and the lab to help provide for the Bruderhof. During this time, Philip also wrote a couple pieces for agricultural magazines overseas. In “How Shall We Farm?” he observed that a large gap existed “between what the farmer knows to be right, and what a competitive economy forces him to do”:

…Organic farming, by itself, as an isolated factor, can never reach its full significance. It stands for the great truth that agriculture can never be stable and permanent until man learns and obeys the laws of fertility, the cycle that includes the decay of the old and the release of the new, or, to put it biblically, to “subdue and replenish.”

But it can only realize its full meaning in the context of an organic life. Man’s relationship to the land must be true and just, but this is only possible when his relationship to his fellow man is true and just and organic. This includes the relationship of all the activities of man—of industry within agriculture, of science with art, between the sexes, and above all between man’s life and his spiritual life.

Philip didn’t stop writing poetry, despite the adversity and frenzied activities of his days. Many of these poems reflect an inner stillness and poise, a deep spiritual undercurrent, that navigated his actions and thoughts throughout this time—and that give rise to the title of this book, Water at the Roots. “We are like plants in the tropical sunlight,” he writes in one sermon. “The fierceness of the sun is like the judgment of God, revealing everything, burning, purifying. Here faith is like water at the roots. If we have faith, we can face the sun, we can turn the heat and the light into life-giving fruits, into love.”

In many ways, Philip’s writings remind me of Wendell Berry’s: so observant of nature and its rhythms, full of awe and gratitude at creation’s mysteries and intricacies. He, too, warns of the dangers of machine and humanity’s belief in inevitable, perfect progress (“Is not this the poison of the age, the belief of man in man?” he writes in one essay). He urges all of humanity towards deeper communion with land, plant, and animal—a sort of spiritual or virtual farming, a stewardship of the soul, that draws us into reconciliation with man and earth. It’s remarkable that these two men, divided by time, place, and circumstance, could draw such similar inspiration from the created world. It’s also true that their vocation calls forth awe and aspiration more than most, wedded as it is with nature’s rhythms and a sort of intentional gentleness.

Philip’s fiery faith—passionate, even radical, in its disposition—also reminded me of Dietrich Bonhoeffer, a German pastor and theologian who died in Nazi Germany. Bonhoeffer drew similar allusions in his writings—especially The Cost of Discipleship—to the personal and material costs of our faith, arguing that it calls us to extreme devotion and surrender. Bonhoeffer’s Life Together lays out a similar vision of Christian community and hospitality, one that complements the Bruderhof’s profound devotion to each other.

It is hard, in modern America, to imagine such extreme devotion to community. Our capitalistic society lauds charity and philanthropy, but looks askance at the Bruderhof’s radical sharing of wealth. It promotes farming—but old-fashioned rhythms of agriculture, such as those employed by the Amish or the Bruderhof, are viewed as reactionary, if not silly. We’re constantly marching forward, at least in our own minds, toward greater wealth, knowledge, innovation, and power. We have no time to look backwards and to consider what we might have lost along the way.

Philip travelled to Brazil in 1945 with a group of horticulturists to find new crop possibilities for the Bruderhof community. There, he contracted a fungal infection that spread throughout his body, and caused his death two years later. He was only 31 years old, and left behind a wife and four children (one still in the womb). He’d just recently been chosen to serve as a new pastor within the Primavera community, and everyone was stunned and devastated by his loss. His wife wrote at the time that “one must not go down under a flood of sorrow. Ever since we have known each other, we always felt that we had been led together by God.”

Philip had hoped to write a book about agriculture for his son called Written in the Soil, which he never got to complete. But Water at the Roots compiles his poetry, essays, and sermons for the rest of us. It’s a welcome retreat from the frenetic writings of our time, the constant invitations to anger and despair. A few lines of poetry, in particular, stick in my head:

There are so many songs that need to be sung.

There are so many beautiful things that await

The sensitive hand to pick them up

From this strange din of busy living.

(Philip wrote that when he was 19 years old.)

Not all of us will join a Christian community like Philip’s. And not all of us will work the land, as he did. But thankfully, Philip’s writing contains nuggets of wisdom and conviction for all of us: reminders to be still, to love others, to steward our possessions well. We may not be members of the Bruderhof, but perhaps we can all strive to live a little more like Philip Britts. The world would be better for it.

Gracy Olmstead is a writer and journalist located outside Washington, D.C. She’s written for The American Conservative, The Week, National Review, The Federalist, and the Washington Times, among others.