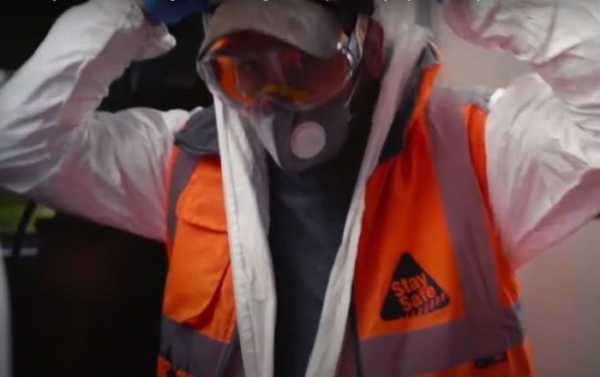 The elusive street artist stencilled coronavirus-themed artwork in a train carriage while disguised as a clean-up worker. The graffiti has since been removed despite its public health message.

An extremely rare sighting of Banksy has been filmed and posted online by the artist himself.

The British graffiti master took to the London Underground wearing a white boiler suit, mask and goggles that only left an open slot for the eyes.

He climbed on board a train posing as a transport worker to spray-paint several of his trademark rats. One appeared to sneeze blueish droplets onto the window, another used a surgical mask as a parachute, and a third struggled under protective gear.

Banksy also sprayed the phrase “I get lockdown” on the wall of a station, which finished off with “but I get up again” on the train doors, in a reference to the 1997 hit Tubthumping.

“If you don’t mask – you don’t get,” he wrote alongside the video on Instagram on Tuesday.

Hours after it was published, London’s transport authority confirmed that the artwork had already been removed some days prior because it violated the underground’s strict anti-graffiti policy.

The legendary street artist prefers to remain anonymous, which is one of the primary reasons why he became legendary in the first place. A long-forgotten 2003 interview with Banksy was discovered in the archives of ITV network last year. It shows the artist, whose face is covered by a baseball cap and a pulled-up T-shirt, speak about his unwillingness to go public.