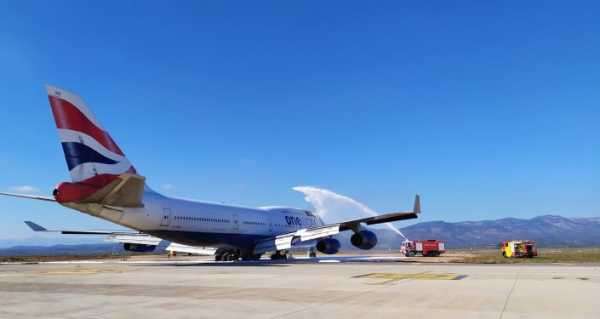 The Boeing 747-400 was one of 31 British Airways jets to be decommissioned by the national airline. It made its last flight to Castellón in Spain in August to be scrapped by Welsh-based company eCubes.

A former British Airways Boeing 747 has caught fire at a Spanish airport with video showing smoke pouring from the cockpit area as firefighters rush to put out the blaze.

The drama unfolded at Castellón airport, north of Valencia on the Mediterranean coast, on Monday. Airport authorities said there were no injuries and the fire was contained.

Video showed smoke pouring from holes in the right side of the fuselage just behind the cockpit windows, although the source of the fire was not yet confirmed.

Castellón Airport tweeted that its firefighters and those from the Castellón fire brigade worked together to extinguish the fire.

​The Boeing 747-400, with the registration G-CIVD, made its last flight in August 2020 after BA announced all its 31 Jumbo Jets would be decommissioned. It was set to be scrapped by Welsh-based firm eCubes at its Castellón facility.