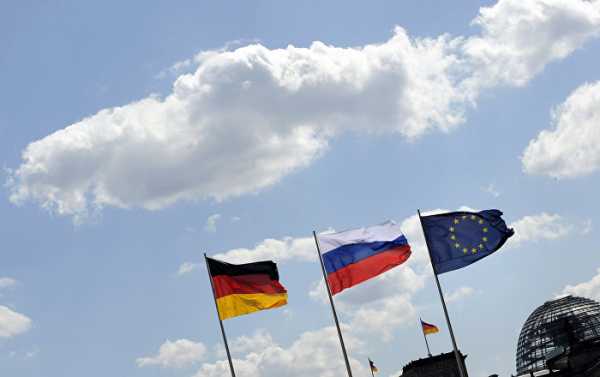 MOSCOW (Sputnik) – US sanctions on Moscow have already cost German businesses operating in Russia several billion euros, Matthias Schepp, the chairman of the managing board of the Russian-German Chamber of Commerce said Wednesday.

“If we take these figures and apply them to all German businesses in Russia, which is over 4,500 companies, we can see that losses [due to US sanctions] add up to several billion euros”, Schepp said at a news conference.

The chamber has conducted a study among 141 German companies in Russia and found that these businesses had lost a total of 1.1 billion euros ($1.2 billion) since the sanctions were imposed in 2014. The results varied from company to company, however, with up to 41 percent of firms saying their businesses had not been affected by the sanctions and 1 percent saying they had lost up to 500 million euros.

Rainer Zele, the president of the Russian-German Chamber of Commerce, said at the news conference that the US sanctions were directed at many German companies operating in Russia as a way to gain an advantage in the market. Zele also urged the European Union to withdraw its own sanctions against Russia as soon as possible.

German businesses have been actively investing in Russia’s economy since the fall of the Soviet Union in 1991. According to Deutsche Bundesbank, German firms made a record 3.2 billion euros in direct investments in Russia last year.

Russian-EU relations took a downturn in 2014 after the bloc, along with the United States, slapped economic sanctions on Moscow over the armed conflict in Ukraine’s east. Russia has denied any role in the fighting and retaliated by imposing a food embargo on those Western nations that targeted it with sanctions.

According to the UN Special Rapporteur on the negative impact of the unilateral coercive measures, Idriss Jazairy, the European Union has suffered greater losses than Russia as a result of sanctions, as the latter has mitigated the effects of the restrictions by boosting domestic production.