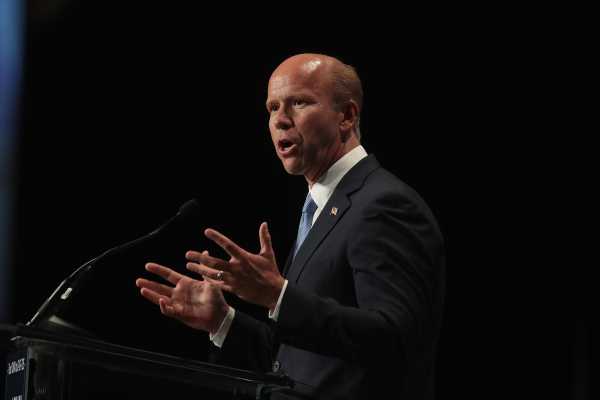 Delaney has secured a spot on the first 2020 debate stage, a validation of sorts for his candidacy. The joke is that the former Maryland congressman stepped away from Congress in 2018 so he could go live in Iowa, the first caucus state, and while he hasn’t ascended very far in the polls, he has done enough to get a voice in the debate.

The closest thing to a star moment for Delaney so far was his appearance at the California Democratic Convention, in which he disavowed socialism and major left-wing policies like Medicare-for-all. He was booed by the California crowd, but that wasn’t necessarily a loss for Delaney: he is a former health care financier and clearly wants to position himself as a more moderate candidate who believes in capitalism and pragmatic solutions to policy problems.

“We’ve got to be able to have a robust policy debate out in the open, that’s what this primary process should be about. A few boos aren’t a big deal; making a really bad mistake on health care is,” Delaney said after the debate. “We can’t be dedicated to slogans and must ensure that a real debate happens. Most of the Democrats in this field either don’t want to take this on or are trying to play it both ways, but I don’t think that’s responsible.”

Delaney sees himself as the adult in the room on a major issue — health care — for the Democratic primary debate. He has a universal health care plan, though it is more limited in benefits and scope than single payer plans. (He is also, notably, still heavily invested in the health care industry; about $3.2 million of his $280 million fortune comes from the health care sector, per Sludge.)

It doesn’t necessarily seem like a winning strategy to tell an excited young progressive base that their trademark policy idea is a loser — and Delaney isn’t leaving much of a mark on the 2020 polls. But he is still trying to leave a mark on the policy debate. It’s a project two years in the making.

The former Maryland lawmaker — he was in Congress for six years and was a health care finance executive before entering politics — launched his presidential bid in 2017. In his time in Congress, Delaney regularly had a bipartisan voting record; putting an end to partisan gerrymandering was one of his pet projects. As a presidential candidate, he has promised to spend as much time in Iowa as was necessary to build a credible base in that critical primary state.

On foreign policy, Delaney has laid out a free-trade, global engagement agenda, and he doesn’t want to cut military spending, a departure from most of the other Democrats in the field.

But health care is arguably his hallmark. Delaney has cooked up his own plan for universal coverage. The plan sticks out for two reasons: He is a former health care financier, so he brings an unusual amount of expertise to the issue, and while his plan is a path to universal coverage, he is going out of his way not to call it Medicare-for-all.

Granted, there are a lot of details Delaney still needs to fill in, but the bones are pretty simple:

He openly defends the role of private insurance in the health care market. As Delaney told Vox in a recent interview:

He wants to leave Medicare as it currently exists alone, to avoid rousing the fears of American seniors who worry a dramatic expansion of the program would mean their own benefits might get worse. That’s a line Donald Trump and Republicans are running with, though the current Medicare-for-all proposals would actually improve the benefits and the cost-sharing requirements of the existing Medicare program.

“If a Republican was running against Medicare-for-all, they would look at seniors in this country and say, ‘Let me tell you what these Democrats want to do, they want to take the Medicare that you paid for, yes, you paid for, and they want to give it to everyone else,’” he told Vox. “Leave Medicare alone, which doesn’t mean you don’t try to improve it. But it stays as an independent thing. Maybe in 50 years, these programs merge together.”

It’s a very specific pitch Delaney is making, both on health care and for his candidacy: Progressive goals are admirable, but Democrats have to be practical about getting there. It’s not dissimilar to the more moderate messages of Joe Biden, Pete Buttigieg, or Amy Klobuchar. Delaney’s candidacy still looks like a long shot for the time being, but he is clearly intent on continuing to make his case.