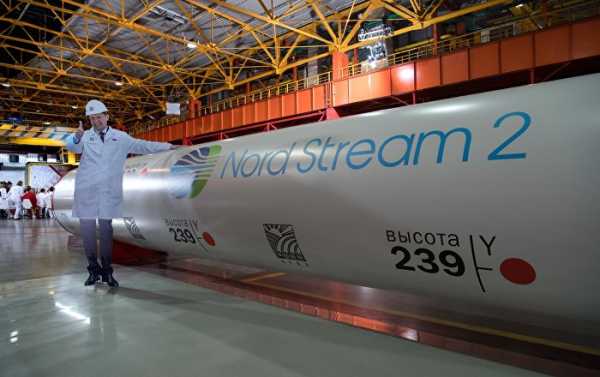 Washington, in the coming weeks, may sanction companies participating in the Nord Stream 2 gas pipeline project, the Wall Street Journal reported, citing a number of US officials. The US president earlier spoke out in favor of Europe buying more US LNG.

On August 22 Russian President Vladimir Putin said on that Europe’s market needs the Nord Stream 2 project as gas consumption is on the rise and the continent’s reserves are being depleted. The comment came during the press conference on the results of the talks between the president and his Finnish counterpart Sauli Niinisto.

“The key point here is that [gas] consumption is rising and Europe is no exception. Gazprom alone increased its supplies to Europe by 13%. At the same time, gas reserves in European countries, Norway, the UK, are being depleted,” Putin said.

Putin also noted that Russia is “the most optimal supplier” of gas to Europe, given the amounts needed and the distance from source to recipient. He also added that Russia is ready for competition on the European gas market.

We are ready to compete with everyone. We hope for fair competition within the framework of existing international legal norms,” Putin said.

Earlier, reports surfaced suggesting that Washington may impose sanctions on companies participating in the Nord Stream 2 project. An anonymous White House official told the Wall Street Journal, a new package of restrictive measures is currently being discussed by the US government following the failure to halt construction on the Nord Stream 2 pipeline.

In July, US President Donald Trump said he found it unacceptable that Germany was paying billions for Russian gas and offered Europe to buy more US LNG. The president of the EU Commission commented on the offer by saying that Europe is ready to buy LNG if its price becomes more competitive with regular pipeline gas.

Nord Stream 2 project is a joint venture of Russian energy giant Gazprom and France’s Engie, Austria’s OMV AG, UK-Denmark’s Royal Dutch Shell, and Germany’s Uniper and Wintershall. The gas pipeline will have an annual capacity of 55 billion cubic meters and is expected to be put into operation by the end of 2019.