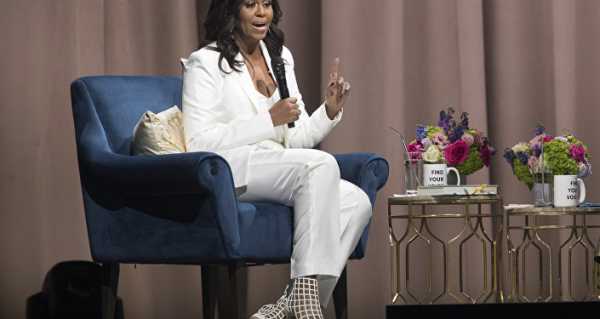 Ex-First Lady Michelle Obama has advised British girls to look upon the coronavirus pandemic (which has caused over 500,000 deaths in the US alone) “as a great blessing”, because it can effectively teach them how to plough their way through “something hard and uncomfortable and unpredictable”.

Addressing current students and alumni of the Elizabeth Garrett Anderson School (EGA) in Islington and Mulberry School for Girls in Tower Hamlets during a video call, the former first lady elaborated on the across-the-board impact of COVID-19, along with such crucial issues as career motivation, leadership, and mentorship in an event that marks the publication of the young reader version of her recently released memoir “Becoming”.

She also made a reference to the life lesson she shared with her daughters, saying:

“I think to view the pandemic as something that will help us in the future is a really positive way of looking at things. If we just spend our time just blaming everything and making excuses and thinking, ‘Well, I don’t have to do well at school because there’s a pandemic’, then we’ve lost anyway, so I think that’s such great advice”.

Michelle has been to both UK schools. She states in her book that she first travelled to EGA in 2009 and has kept contact with it ever since, even inviting several EGA pupils to the White House. In 2015, she suggested that Mulberry pupils also come to the US presidential office on a visit.

The Obamas may have left politics, but only to embark on other ventures – a lucrative multi-year contract to produce documentaries for the streaming giant Netflix, as well as Michelle’s 2018 memoir, where she dwells on her years in the White House and what followed them. For its audio version, she received a Grammy Award nomination in late 2019, despite rather widespread criticism of the motion.

As part of the deal with Netflix, the couple introduced their own production company, Higher Ground Production.

Their first docu – “American Factory” – aired in August 2019, and tells the story of a Midwestern factory with Chinese entrepreneurs breathing new life into it, in a purported swipe at Barack Obama’s successor, Donald Trump’s allegedly undelivered vows to revive industries in the area. In February 2020, it won the Oscar for best documentary feature.