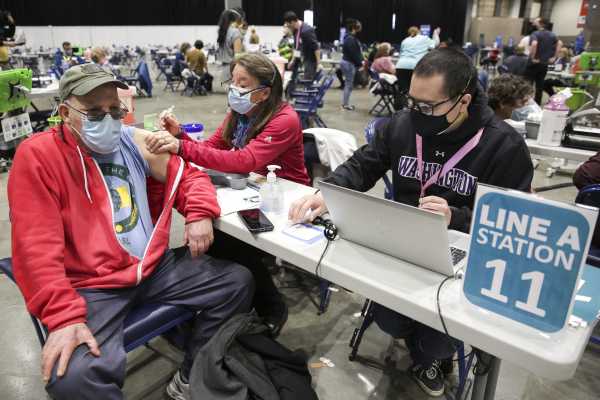 The pharmaceutical industry is enjoying new popularity with the American public after delivering effective Covid-19 vaccines at record speed, according to new polling from Data for Progress.

But that doesn’t mean voters have lost their interest in bringing down prescription drug costs, the same survey finds.

More than half of voters, 56 percent, say they have a favorable view of pharmaceutical companies in the Data for Progress poll of 1,225 likely voters conducted in late March. Just 24 percent said they have an unfavorable view.

That is a substantial improvement in public feelings toward pharma from a November 2019 Data for Progress poll that found 48 percent of voters had a favorable view of “pharma research companies” and 38 percent had an unfavorable view. In September 2019, a Gallup survey showed the industry’s reputation in even deeper trouble before the pandemic, with 58 percent of Americans holding a negative view of drugmakers and just 27 percent saying they had a positive opinion.

It is not hard to understand why the public is feeling so magnanimous toward an industry that is usually a political villain. Pfizer, Moderna, and Johnson & Johnson have all developed effective Covid-19 vaccines in less than a year (the previous record for vaccine development was four years). Those specific companies are even more popular than the drug industry as a whole: Pfizer has a 65 percent favorability rating, Moderna is at 60 percent, and Johnson & Johnson registers 68 percent favorability.

More than 100 million Americans have received at least one dose of a vaccine. A return to relative normalcy in the US by this summer is actually plausible. The industry can rightfully argue it delivered critical innovation at a moment when it was desperately needed (though those efforts were supported by a lot of public investment).

Pharma’s popularity is a stark reversal from the past decade, when headlines about price-gouging induced bipartisan outrage and lawmaker interest in policy changes that would reduce drug costs. But though the public seems grateful for the industry’s work on Covid-19, they are still supportive of drug pricing reforms, according to Data for Progress.

Three-fourth of Americans say they disapprove of how drug companies are handling the rising cost of prescription drugs. And 77 percent said that while pharmaceutical firms did a good job developing the vaccines, they still need to be regulated to reduce drug costs; just 16 percent said drug companies shouldn’t be burdened with any more regulation because it would prevent the development of new treatments.

Proposals to allow Medicare to directly negotiate with drugmakers on prescription drugs, to allow the federal government to manufacture generic alternatives to brand-name drugs, and to link US drug prices to the prices paid by other countries are all supported by strong majorities of the American voting public.

But public support for reforms has not always translated to government action. Pharma enjoys massive clout with Congress and the rest of the federal government. As I reported in December, the drug industry’s reputation is just one reason lobbyists and policy experts are skeptical about major movement to rein in drug costs over the next few years.

“Now that it’s looking like we’ll have successful vaccines, drug companies could come out of this pandemic as heroes that saved us from the evil virus,” Larry Levitt, executive vice president at the Kaiser Family Foundation, told me. “That will make it harder to demonize the pharmaceutical industry in a fight over drug pricing.”

For now, the Biden administration and Democrats in Congress are still promising big actions. The Wall Street Journal reported this week that a provision to give Medicare more authority to negotiate drug prices directly with manufacturers is expected to be a priority for Biden’s next legislative push. There could also be smaller, more targeted reforms that attract bipartisan support, particularly those that encourage the development of generics. And Biden has plenty of administrative authority to set up pilot programs or pursue other policy changes in Medicare and Medicaid that could reduce the cost of medications, as I reviewed a few months ago.

The drug pricing issue is a complicated one, in part because it’s actually two distinct problems. One is the actual list prices set by pharma companies, which most insured patients and health systems don’t actually pay but that still set the top line from which various discounts and rebates are applied. (And for the uninsured, that is their price unless they get some kind of assistance.) The other issue is out-of-pocket costs, or what patients must pay under their insurance plan.

But regardless, depending on the specific policy, Congress and the White House risk alienating drug companies, hospitals, doctors, or all of the above when they discuss how to bring down health care costs. That’s why it’s proven so hard to get anything done.

Activists argue that the urgency of reducing drug costs for Americans has become only more apparent during the Covid-19 pandemic, even if pharmaceutical companies try to use their success with vaccines to their political advantage.

“If there is anything that this pandemic should have taught us, it’s that something should be done. We shouldn’t allow ourselves to think it’s not possible,” Dana Brown, who promotes drug pricing reform for the Democracy Collaborative, told me in December. “Can we literally afford the status quo? For me, the answer is no.”

The American public has been demanding action on drug prices for a while, with limited success. Millions still struggle to afford necessary medications. This Data for Progress polling suggests Biden would have voters behind him if he decided to tackle drug costs, even with the industry’s vaccines set to bring the pandemic to an end.