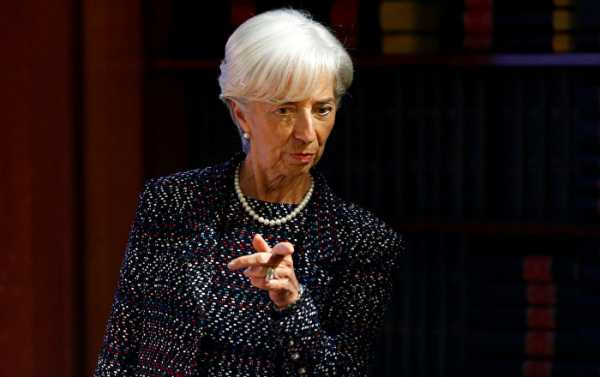 As the confrontation between the US and China continues to develop, Christine Lagarde warned that “darker clouds looming” over bright picture and identified the main challenges for the world economy.

The managing Director of the International monetary Fund (IMF), Christine Lagarde lashed out at protectionism, which casts a shadow on the future of world trade, saying that “the restrictions hurt everyone, especially the poor clients.”

“They not only lead to higher production and a more limited selection, but they also prevent trade plays an important role in increasing productivity and diffusion of new technologies,” Lagarde said during his speech at the University of Hong Kong.

In her words, “the current global picture is bright,” but there are “dark looming clouds.”

Four threats to the global economy

“Significantly increased” uncertainties include trade tensions, the growth of financial and tax risks, as well as more uncertain geopolitics. She warned that the global trading system “rules and shared responsibility is now in danger of being torn to pieces.”

“It would be unforgivable, collective political failure,” – said Lagarde in her speech, in anticipation of the annual spring meeting of the country’s leaders and top bankers of the 189 member countries of the IMF, which will be held in Washington next week.

Tensions between the US and China are expected to dominate the agenda of the summit according to the guardian.

In March, the US imposed new tariffs on imported steel and aluminum, which target China and other countries. Beijing said in April that imposing duties on some imported goods to us.

Last week, Washington imposed another set of tariffs that will cover about $ 50 billion in Chinese goods, while US President Donald trump proposed to introduce tariffs, which will focus on $ 100 billion in imports of Chinese goods. Shortly after the announcement, Beijing announced a similar duty on U.S. imports of comparable value.

Although she didn’t name names, Lagarde warned against the exchange of threats, which can only aggravate the situation.

“There are threats, there are counter-threats, is an attempt to start a dialogue, we should support this dialogue attempt as much as possible. The impact of these threats is minimal on both sides. That is not a minimal path in which trust can be undermined,” she said.

Lagarde also gave her view on the best ways of dealing with the imbalance, saying “unfair trading practices have little impact on overall trade deficit of the country with the rest of the world. This imbalance is due to the fact that the country is spending above his income.”

According to her, the more effective tools include reducing the state budget deficit, strengthening fiscal and tax system and gradual reduction of public debt.

So she advised us to narrow its budget deficit and suggested that Germany could contribute by spending more. With regard to major emerging markets such as China and India, she noted that “strengthening financial sustainability through the increase of buffers in the corporate and banking sectors-key”.
The IMF has previously expressed serious concern about tariff restrictions of Donald trump.

“Import restrictions announced by the President of the United States is likely to damage not only us, but the US economy itself, including its manufacturing and construction industries, which are the main consumers of aluminum and steel,” reads the statement by the organization read.

Meanwhile, Christine Lagarde has expressed doubts about us President-elect Donald trump has a clear plan for the economic policies he intends to pursue.