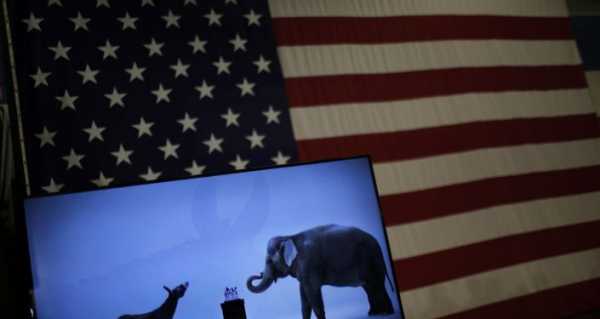 Republicans have campaigned on the idea of fiscal conservativism and battling budget deficits since at least the Eighties and the election of Ronald Reagan, but have also shown a tendency to look the other way on the issue when a Republican is in the White House.

Republican lawmakers are preparing to step up their criticism of out-of-control government spending if and when Joe Biden becomes president, The Hill has reported, citing senior GOP officials.

Lindsey Graham, the South Carolina Republican senator who is expected to become chairman of the Senate’s Budget Committee in January, told the outlet that reining in the deficit must again become a priority for lawmakers.

South Dakota Senator John Thune – described as the Senate’s “No 2” Republican – echoed Graham’s concerns, saying that the GOP needs to get “back to our DNA” of slashing the deficit.

“Whoever is in the White House I hope they realise how serious the debt crisis is and how important it is that we put measures in place to address it. And hopefully when that vote comes around, we’ll have some of those reforms,” Thune said, referring to the possibility of reinstating the ceiling on US debt in July 2021.

Congress and the White House agreed to nearly $2.8 trillion in emergency spending, and more than a trillion more in assistance to banks, in the wake of the massive economic dislocation caused by COVID-related lockdowns in the spring of 2020. Since then, the two parties have battled it out on passing additional relief measures, with the Democrats proposing a minimum of $2.2 trillion in new relief, and Republicans saying the figure should be closer to $500 billion. The two parties accused one another of deliberately politicising the issue ahead of the 3 November election and purposely stalling negotiations, even as tens of millions of Americans have faced job losses and eviction in an economic crisis the International Monetary Fund has dubbed the greatest economic downturn since the Great Depression.

Graham deflected possible criticism from the Democrats about Republicans’ suddenly remembering their anti-deficit rhetoric post-Trump, admitting to The Hill that both parties “got here together” and suggesting the solution to the debt issue “has got to be something like Simpson-Bowles,” the bipartisan presidential commission on deficit reduction introduced by Barack Obama in 2010. “There’s got to be some shared understanding of the problem,” he said.

The US budget deficit hit an all-time high of $3.1 trillion in 2020, more than doubling the previous record. Before that, the deficit (ie, the difference between spending and the amount of money that the government collects) grew consistently under both Barack Obama and Donald Trump from a 2015 low of $439 billion.

Trump had criticised his predecessor repeatedly over the issue of debts and deficits before 2016, and promised to eliminate what was then $20 trillion in federal debt over two terms by cutting spending and getting better trade deals. However, he reportedly abandoned the promise in late 2018, purportedly telling staff that he “won’t be here” when the problem becomes insurmountable.

The United States’ federal debt amount currently stands at $27.3 trillion, equivalent to about a third of the total value of the global economy. The US enjoys a unique position when it comes to its ability to rack up debts and deficits, with the dollar’s status as the de facto world currency allowing the country to print and exchange currency in exchange for real world goods in a fiscal strategy which would lead most other nations to face massive, out-of-control inflation.

Screengrab of US federal debt from USDebtClock.org taken Saturday, November 28, 2020.