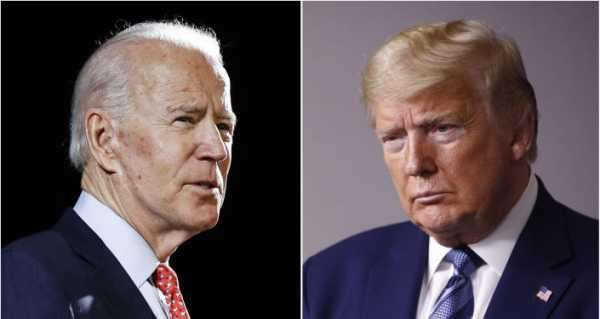 The first Trump-Biden debate is likely to attract a great deal of attention, given a rumour that the Democratic presidential nominee may not show, suggest US political observers giving prognoses on what offensive and defensive strategies the contenders are likely to choose and how the debates will affect their election odds.

A series of US presidential debates between incumbent President Donald Trump and Democratic nominee Joe Biden is due to kick off on 29 September in Cleveland, Ohio, while the final one will take place on 22 October in Nashville, Tennessee. Vice President Mike Pence and Biden’s running mate, Kamala Harris, are expected to verbally cross swords in Salt Lake City, Utah, on 7 October.

What Will Trump and Biden Do in the Debate?

Six topics picked by the first debate moderator, ‘Fox News Sunday’ anchor Chris Wallace, reportedly include: the Trump and Biden records; the Supreme Court controversy sparked by the death of Justice Ruth Ginsburg; the coronavirus pandemic; the turbulent US economy; violent protests triggered by the death of African American George Floyd at the hands of white police while in custody last May; and “the integrity of the election”.

The much anticipated political battle has three important background elements that set the context for this year’s debates, says Eric S. Heberlig, professor of political science at the University of North Carolina:

·         First, the US president has been behind in public opinion polls and so needs to do well in the debates to change the dynamics of his campaign.

·         Second, because Trump is the incumbent, many of the questions will be about his performance and decisions in office, potentially putting him on the defensive and giving Joe Biden the opportunity to attack.

·         Third, while Trump has tried to characterise Biden as old and senile, if Biden performs competently – but not spectacularly – people could conclude that he won the debate because he exceeded expectations.

Trump will most likely “lead the tempo and depth of the debate”, suggests Scott Bennett, a former US Army officer and political analyst. The president is not only used to conflict at this point, “he thrives on it”, Bennet notes, adding that, in contrast, Biden may prove unable to endure conflict or scrutiny and is likely to become “confused, defensive, and hostile during the debate”.

The US president is also likely to jump at the opportunity to tie Biden to Black Lives Matter and to violence and rioting and a defund the police movement, the pundit suggested. As for a Supreme Court replacement, Trump will talk to his base, which is largely hailing his decision to fill Ginsburg’s place with a conservative justice. “He will do his best to motivate even more his base which is already more excited to vote for him than Democrats are to vote for Biden”, Schultz alleged.

For his part, Biden “needs first to prove he is up for the job” and “interject some excitement into his boring and lackluster campaign”, the academic observes, adding that the ex-vice president is most likely to attack Trump’s handling of the pandemic, the economy, abortion rights, and healthcare to win the hearts and minds of swing state voters.

“The stakes for the first debate are high”, Shultz warns. “While polls suggest Biden has a strong lead in the popular vote, the electoral college numbers in the swing states are much closer despite claims by some that Biden has a nearly 80% chance of winning the presidency based on current polling”.

Why the Trump-Biden Debate is Critical

A lot of controversies have simmered around the upcoming event, as US Speaker of the House Nancy Pelosi claimed in August that she did not think there should be any debates, adding to allegations of Biden’s health. Though the Biden campaign has repeatedly stated that the former vice president would accept the Commission’s debates on the Commission’s dates and under the Commission’s established format, Pelosi remains firm in her August questioning of the debate. “Why bother? [Trump] doesn’t tell the truth”, Pelosi told CBS’ “This Morning” on 25 September.

“Assuming that [former] Vice President Joe Biden accepts the invitation to debate President Trump, which many are speculating he will not, the American Presidential debates, and especially the first one, most likely will be the greatest battle in the history of American politics – both inside the arena and outside”, suggests Bennett.

Given the unfolding intrigue, the first Trump-Biden debate may be even more watched than that of Clinton-Trump, and potentially decisive for the race, according to Schultz, who believes that American viewers will pay attention to the slightest detail, as well as to the contenders’ mistakes and misstatements.

While the forthcoming event is likely to keep Americans on the edge of their seats, most have already made up their minds, weighs in academic pundit Heberlig: “Most viewers are not persuaded by the debate – they judge the winner to be the candidate they already favoured”, he says.

Thus, political observers allege that Richard Nixon ceded a major opportunity to his Democratic rival, John Kennedy, partly because the latter looked fit during the debates, while Nixon, fresh out of hospital and without makeup, was seen as pale and visibly sweating. “While many thought Nixon won the debate on content, Kennedy’s appearance played well on television and some claim it was decisive in his victory”, Shultz points out.

Likewise, in the debate between Gerald Ford and Jimmy Carter in 1976, the former declaring Poland to be a free country was damaging to his candidacy, making it look as if he were naive or not ready to be president, outlines the professor, recalling that Ronald Reagan outperformed Carter during a debate by asking the American public if it was better off now than four years ago, reminding them about the dismal state of the economy at that time.