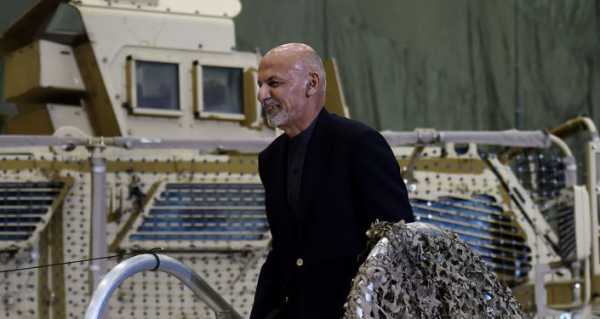 Several media outlets earlier reported that the Afghan president left the country for neighbouring Tajikistan following the consultations with NATO and the US and negotiations to surrender power with the Taliban*.

A video has emerged on social media allegedly showing Afghan President Ashraf Ghani, who stepped down from his post earlier today, board a plane before taking off and flying reportedly to Tajikistan. According to an anonymous source, the president will then fly to a third country after landing in Tajikistan, although his final destination remains unknown.

Ghani left his post in the wake of the Taliban* successfully encircling the capital and demanding a peaceful and full transfer of power. Upon the president’s resignation, the Taliban ordered its troops to enter Kabul, even though the leader of the Supreme Council for National Reconciliation in Afghanistan reportedly asked the group to delay the move and give it more time for negotiations on the terms of transferring power.

Reuters later reported, citing a statement by the Taliban, that there won’t be a transitional government in Afghanistan and that it demands a full transfer of power to the insurgent group. The Taliban’s forces entered the city unchallenged just as they did in several other major cities such as Kandahar and Jalalabad, due to Afghan troops abandoning their posts and either fleeing, surrendering, or switching sides.