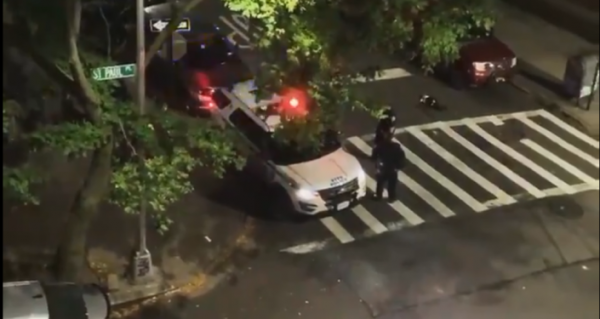 The incident, which took place on Saturday night in New York City’s borough of Brooklyn, comes in the run-up to the 3 November presidential election in the United States, in which Republican President Donald Trump and Democratic candidate, former Vice President Joe Biden, seek to gain the White House.

The New York City Police Department (NYPD) has launched an investigation into a police officer caught on camera appearing to campaign for the re-election of US President Donald Trump in New York City’s borough of Brooklyn over the weekend.

On Saturday night, an NYPD cop was recorded in two videos blaring “Trump 2020” on an NYPD patrol car’s speaker in a Brooklyn neighborhood.

In the second video, a camera-man tells the officer to “say it again”, and the NYPD cop repeats over on over the phrase “Trump 2020”.

The NYPD tweeted on Sunday that the department is “aware of this video” and that an internal probe into the incident was launched, adding that “police officers must remain apolitical.”

NYPD Commissioner Dermot Shea on Sunday denounced the behavior by a police officer and said it is “one hundred percent unacceptable”, arguing that “law enforcement must remain apolitical”.

NYPD department chief Terence Monahan condemned the incident, saying that “behavior like this will not be tolerated and will be dealt with.”

According to the NYPD, the investigation into the officer will be conducted by the Brooklyn South Investigation Unit. The cop’s identity has not yet been revealed.

As Election Day is only 9 days ahead, Trump continues to claim that every police department in the US supports his re-election.