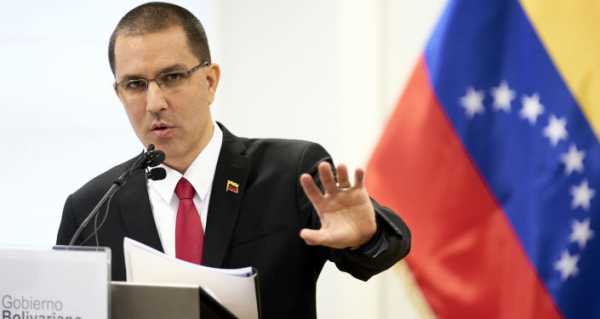 Earlier, the Lima Group, which encompasses over a dozen North and Latin American countries, called on the international community not to recognise the 6 December parliamentary elections in Venezuela, citing the need to stop what it called “electoral fraud” being conducted by Venezuela.

Venezuelan Foreign Minister Jorge Arreaza went on Twitter to ironically comment on another critical speech targeting his country by Colombian Foreign Minister Claudia Blum Capurro, timed to the work of the General Assembly of the Organisation of American States (OAS) on 20-21 October and its discussion of the internal problems of the Bolivarian Republic.

As he attached a video of Blum’s statement to his post, Arreaza slammed the statements as no more than the traditional “Blan Blah”.

The two neighbouring South American countries, Colombia and Venezuela, have traditionally exchanged barbed criticism of one another on almost all issues, deploring the failings of their respective governments and heads of state, their alleged corruption, political bias, illegitimacy and disregard for the interests of citizens in favor of personal political goals.

This handout picture released by Venezuelan Presidency shows Venezuela’s President Nicolas Maduro attending a meeting with members of the National Constituent Assembly (ANC) at the Federal Legislative Palace in Caracas on September 29, 2020, amid the COVID-19 novel coronavirus pandemic.

The OAS, which unites 35 countries of the region, including Colombia, has been advocating a change of power in Venezuela, considering ex-speaker of parliament Juan Guaido to be the country’s legitimate president, and calling for boycotting the upcoming parliamentary elections in the country in December, having in advance declared them unfree and unfair.

Earlier, The Lima Group, which encompasses over a dozen North and Latin American countries, issued a statement calling on the international community to not recognise the parliamentary elections in Venezuela, slated for 6 December.

The Lima Group, created in 2017 with a declared aim to settle the political crisis in Venezuela, voiced strong opposition to parliamentary elections that would be held in the Latin American country allegedly without “democratic guarantees”.

The group called for the involvement of the International Criminal Court in dealing with reported human rights violations, cited by the UN-sent Independent International Fact-Finding Mission on Venezuela.

Most member-states of the Lima Group backed opposition leader Juan Guaido when he proclaimed himself president and organised a failed protest in January 2019.

The US was quick to recognise Guaido, while Russia, China and Turkey, among other countries, have continued to consider Nicholas Maduro Venezuela’s legitimate president.