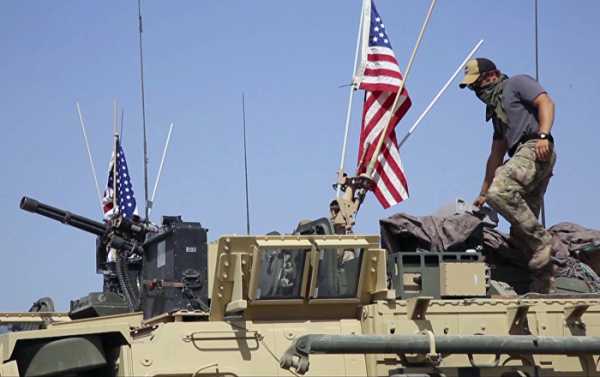 The US military presence remaining in Syria after ousting Daesh group from the country is targeting Turkey, Russia and Iran, Turkish President Recep Tayyip Erdogan said Tuesday. The Turkish leader accused the US of failing to stand by its promise to withdraw troops from Manbij, Syria, currently controlled by Kurds.

Iranian experts agree with Erdogan’s remarks and believe that the US is particularly unhappy with Russia’s and Iran’s influence in Syria.

Mosayeb Naimi, an Iranian political analyst and an expert on Middle Eastern affairs who is also a CEO of Iranian state Arabic-language newspaper al-Vefagh, told Sputnik that the US is pursuing a number of objectives in Syria after its failures in the region.

“The first is to discredit the image of countries supporting [Syrian President] Bashar Assad’s leadership, particularly Russia and Iran. The second — to bolster the crisis in Syria. The US makes sure to show the developments in the country to their best advantage: they commit crimes, either themselves or with the help of Daesh, and then make others answer for them,” Naimi said.

“But we shouldn’t forget that the most atrocious crimes, that cast terror into the hearts of the international community, were schemed with the backing of Washington, with Saudi Arabia’s financial support, and committed with American weapons,” he noted.

According to the expert, now that the crucial phase in the resolution of the crisis has come, the US is trying to create obstacles and aggravate the situation: for instance, by embracing the Free Syrian Army that has recently joined the Turkish Olive Branch military operation in northern Syria, or by replacing militants and terrorists from occupied regions.

Mani Mehrabi, Iranian political analyst, expert on international affairs and member of the Scientific Research Center for International Relations in Tehran, pointed out that Iran and Russia present hurdles for US goals in Syria.

“Regional events, particularly in Syria, have led to the rise of US rivals in the region — Iran and Russia. It happened when the White House didn’t follow a concrete strategy on Syrian crisis management. As a result, the interests of US allies in the region — Israel, Saudi Arabia — have been largely compromised,” the expert said.

“The US aims to continue supporting the Syrian opposition fighting against Assad and trying to interfere in Syrian internal politics and to prevent this country from becoming a political and military base of Tehran and Moscow by so-called federalization of Syria.”

According to Mehrabi, Washington knows that withdrawing troops from Syria would mean paving the way for a stronger alliance between Iran and Syria. The US decision to remain in the country must be seen as an attempt to thwart Moscow and Tehran’s goals in the region.

The views expressed in this article are solely those of the speakers and do not necessarily reflect Sputnik’s position.