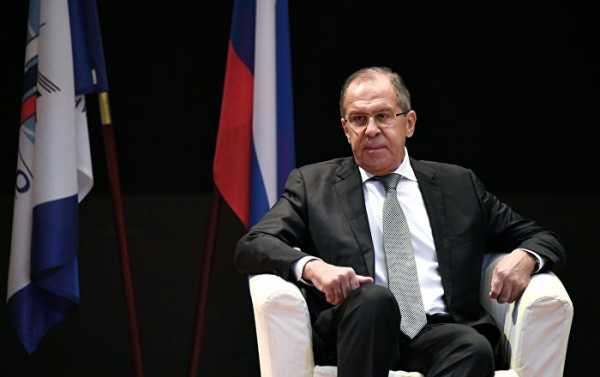 MOSCOW (Sputnik) – US Military build-up in the South China Sea could lead to the military solution of territorial disputes in the ASEAN region. Pyongyang is not planning to make any sudden moves in relation to Seoul during the ongoing Olympics in South Korea, Russian Foreign Minister Sergey Lavrov stated.

“The build-up of the US military aircraft and naval presence in this region can objectively clearly, if not intentionally, provoke military dimension of these territorial disputes. I think that these are very risky games. The United States is already looking not only at North Korea, although it justifies its military presence by the North Korean issue, but also at the South China Sea, where China is holding negotiations with the Association of Southeast Asian Nations (ASEAN) countries on the settlement of disputed territorial issues,” Lavrov told the Rossiya 1 broadcaster.

In his interview, Lavrov noted that Iran is not the only country, which is expanding a ballistic missiles program.

“There are other countries in the region with such programs. We must look at it as a whole. It is hardly justified to mix nuclear affairs with human rights and put the issue on the agenda that Iran should stop taking certain steps in the region… to my mind, a frankly discriminatory, biased and unjustifiably captious approach can be seen behind these US actions,” Lavrov said.

Moscow is ready to conclude an intergovernmental agreement with Tokyo on granting Japan more benefits in holding joint economic activities on the Kuril Islands, said Lavrov.

“We are ready to conclude an intergovernmental agreement on how to develop these economic activities more effectively if the existing benefits which have already been granted by our side are not enough. We are drawing the attention of our Japanese colleagues to the fact that the benefits which already exist in Russia – the territories of accelerated economic and social development, the free port of Vladivostok – are rather attractive. There is no need to create any national body, which has been proposed by some of our colleagues,” the Russian foreign minister pointed out.

Five projects on the joint economic activities on the Kuril Islands have already been created, specifically those in the areas of aquaculture and tourism, Lavrov continued.

“A lot is done in the area of the economy, but there are more things that can be done. Humanitarian ties, tourist groups’ exchange are on a very high level. There is a need to boost cooperation. Ideally, coordination in the area of foreign policies [is necessary],” he noted.

Moscow and Tokyo have significantly improved their relations, particularly the high-level political dialogue which is “indeed trustful, open, friendly, and fair,” Lavrov underscored.

No Sudden Moves From Pyongyang

Pyongyang is not planning to make any sudden moves in relation to Seoul during the ongoing Olympics in South Korea, said Sergey Lavrov.

“Agreements have been reached between the North and the South [Koreas] about the participation of the North Korean delegation, athletes, dance groups [in the Olympics]. Simultaneously, accords between Pyongyang and Seoul have been reached about the restoration of contacts in the military area, so this ‘freeze’ is de-facto underway. North Korea obviously is not planning to make any sudden moves, at least before and during the Olympics. We have also heard that no US-South Korean drills are planned at least until March,” Lavrov said in an interview with Rossiya 1 broadcaster.

Lavrov pointed out that if this objective restraint process and refraining from drills and explosions gain its dynamics, there might be a chance of sitting at the negotiating table. Lavrov also reiterated the graveness of the North Korean nuclear issue.

“[It is grave] not only because we are interested in compliance with the nuclear weapons non-proliferation regime, but because the issue of the North Korean nuclear power is used for increasing the disproportionate military presence of the United States in the region,” the Russian diplomat pointed out.

Washington has told Russia that acting in line with this approach is unacceptable because unlike North Korea’s nuclear and missile launches, the US-South Korean drills represent legitimate international activity, Lavrov noted.

The Russian foreign minister recalled that Russia and China had proposed the so-called double freeze initiative, according to which North Korea would not hold nuclear and missile tests, while the United States and its South Korean partners would abandon or sharply decrease the scale of their military drills.

Russia will pursue the trend of mutually beneficial projects development with China in various areas. There are countries willing to speculate about the issue of the Moscow-Beijing relations, according to Lavrov.

“Life proves that such speculations are inconsistent. For example, let us consider specifically the experience of our economic cooperation with China in the Middle East and Eastern Siberia. If we consider the statistics, and the things which are implemented, it will be clear that we are just developing mutually beneficial projects, which do not bear any threat for the territorial integrity of Russia. This trend will be continued,” Lavrov said.

According to the Chinese General Administration of Customs, in 2017, rotation between Russia and China has increased by 20.8 percent year-on-year to over $84 billion.

Russian President Vladimir Putin and his Chinese counterpart Xi Jinping have declared 2018 and 2019 the years of bilateral cooperation.

In his New Year’s greetings to Putin, Xi expressed China’s readiness to boost political and strategic trust between Moscow and Beijing. Putin, in his turn, reiterated Russia’s readiness for cooperation with China on increasing bilateral strategic ties.

Commenting on the Joint Comprehensive Plan of Action (JCPOA), known as the Iranian nuclear deal, Lavrov said that this agreement is effective.

“Americans have a proverb ‘if it is not broken — do not repair.’ This agreement is in fact not at all ‘broken’ and it is very effective. But they try to ‘fix it,’ but beforehand they try to break it. This is bad,” Lavrov stressed.

Last month Trump announced that he would waive sanctions on Iran as required by the JCPOA, but said this would be the last time. In July 2015, Iran and the P5+1 group of nations — the United States, Russia, China, France and the United Kingdom plus Germany — signed the JCPOA. The agreement stipulates a gradual lifting of sanctions imposed on Iran in exchange for Tehran maintaining the peaceful nature of its nuclear program.

“In general, the US missile defense items are deployed on the territory of South Korea and Japan under the pretext of the North Korean nuclear issue. Together with the European section of the US global anti-missile system, which can be clearly seen on the maps, this entire system astonishingly, by chance or not, is almost surrounding Russia along its perimeter. And now it is at the same time targeting China,” Lavrov said.

It is in our interest not to give the handle for the strengthening of such trends, which requires sitting at the negotiating table, the Russian diplomat noted.

The US sanctions against the Russian defense industry represent unfair and corrupt competition, Lavrov said. The Russian foreign minister characterized such US actions as “rough pushing out of the market, notably with the use of blackmailing and ultimatums.”

“For example, the sanctions against our defense industry are clearly unfair and corrupt competition, because simultaneously with [introducing] these sanctions, the United States is ‘rushing’ around the world asking its ambassadors in the Latin American, Asian, African countries to refuse to purchase our military equipment and weapons, explaining that the US authorities would compensate the lack of the relevant equipment in this or that country,” Lavrov stated.

US Supply Lethal Weapons to Kiev

“We cannot prohibit the United States from supplying anything to anywhere, but we will certainly draw conclusions. The fact that representatives of Donetsk and Luhansk, who have the opportunity to stand up for themselves, are closely watching this, is also an objective fact. I think that this should also be taken into account,” Lavrov said.

According to Lavrov, Washington is trying to involve is similar affairs such states as Poland and the Baltics, which have used to show anti-Russian sentiments, however, “solid” European countries are against such weapons supplies to the Ukrainian authorities.

“Europe is not silent, however, its objections are quiet and nonpublic… According to our data, big solid European states are perfectly aware of the danger, that such actions may cause, and they are trying to bring neighbors to their senses, because the Americans, together with the Canadians, have already started to engage in these supplies. And this is regrettable,” the minister stressed.

Earlier in February, Ukrainian Defense Minister Stepan Poltorak held talks with US Defense Secretary Jim Mattis and said that the sides had reached “a full understanding” in the issue of the transfer of US defensive lethal weapons to Ukraine.

In late December, US State Department spokeswoman Heather Nauert said the United States planned to provide Ukraine with military assistance so that the country could protect its territorial integrity, in a way that was purely defensive and would not violate the Minsk peace accords. In particular, US media suggested that Washington was planning to supply 210 Javelin anti-tank missiles and 35 launchers to Kiev. In January, Ukrainian President Petro Poroshenko said that Ukraine expected to receive defensive weapons from the United States in 2018.

Russia has repeatedly warned against supplies of lethal arms to Ukraine, saying that such actions would exacerbate the conflict in the country’s eastern Donbas region.