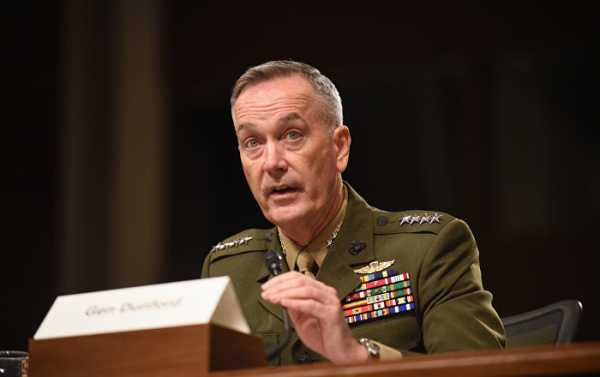 Washington’s new nuclear doctrine, which was announced on 2 February, outlines that President Trump, just like predecessor Barack Obama, would consider using nuclear weapons only in “extreme circumstances”. The Nuclear Posture Review also allows the US to strike first in a preemptive move.

General Joseph Dunford, the chairman of the Joint Chiefs of Staff, has warned against changing the current US military policy which allows the country to be the first to use nuclear weapons during a possible conflict with an adversary.

Speaking at a Senate Armed Services Committee hearing, Dunford said that he “absolutely” believes that “the current policy is the right policy”.

“I wouldn’t make any decisions to simplify an adversary’s decision-making calculus. I can also imagine a few situations where we wouldn’t want to remove that option from the president”, he pointed out.

He described the triad as “the most effective way to prevent a nuclear war”.

The statement comes more than a month after the Trump administration announced the US’ new nuclear doctrine which specifically stipulates short-term plans to modify existing submarine-launched ballistic missile (SLBM) warheads to provide a low-yield option and pursue a modern nuclear-armed sea-launched cruise missile (SLCM) in the long run.

Washington said that the Nuclear Posture Review aims to raise the US nuclear threshold to ensure that the country’s potential adversaries perceive no possible advantage in a nuclear escalation.

The lawmakers underscored in a statement at the time that “the crucial issue of nuclear ‘first use’ is more urgent than ever now that President Donald Trump has the power to launch a nuclear war at a moment’s notice”.

“It is a frightening reality that the US now has a Commander-in-Chief who has demonstrated ignorance of the nuclear triad, stated his desire to be ‘unpredictable’ with nuclear weapons, and as President-elect was making sweeping statements about US nuclear policy over Twitter”, the statement noted.

A preemptive nuclear strike would come in the form of a surprise attack to repel or defeat a perceived imminent offensive by a possible enemy possessing nuclear weapons.