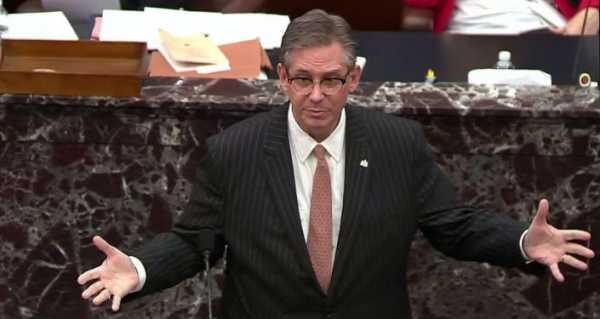 Donald Trump’s legal defense team saw some swaps at the last moment, as, according to reports, five lawyers left the team shortly before the impeachment trial in the Senate was due to commence. In early February, Trump announced he had hired two new lawyers: Bruce Castor and David Schoen.

As the second impeachment trial for the former US president, Donald Trump, began on Tuesday, one of his defense lawyers, Bruce Castor, appeared to have stolen the show on Twitter, with his remarks propelling his name into Twitter trends.

Netizens noted how Castor in his arguments “dared” the Department of Justice to arrest Trump, referring to Greece and Rome falling as democracies, due to partisanship while appearing to admit that Trump lost the election – even though his client is still adamant that there was “election fraud”.

​Trump’s lawyer appeared to praise his rival’s level of preparation, admitting that the defense team legal strategy had to be changed due to that.

​Many netizens mocked Castor’s arguments for being messy and tangled.

​Some even came up with a Super Bowl meme with The Weeknd to illustrate the speech. Others recalled a Tuesday viral story with a lawyer (luckily from a different case) accidentally covering his face with a cat filter on Zoom and joked that a cat would do better than Castor.

​People suggested that the impeachment trial might end up with a conviction. But perhaps not for Trump.

​The trial, to decide whether Trump will be impeached in the US Senate for “incitement of insurrection” during the deadly 6 January Capitol riot, is expected to last over a week.

Despite some netizens joking and calling for Trump’s conviction, it will take at least 17 Senate Republicans to vote for it – something that many observers suggest is unlikely to happen.