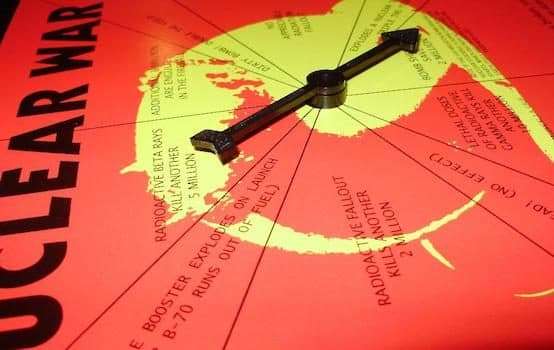 In 1947, a group of scientists who participated in the Manhattan Project—America’s crash wartime effort to manufacture an atom bomb during the Second World War—unveiled what it called the “Doomsday Clock” to graphically convey their concern over the danger posed by nuclear weapons to the survival of humanity.

In the intervening years, this organization, the Bulletin of the Atomic Scientists, has seen its iconic timepiece fluctuate from its starting position—seven minutes to midnight (when the world will end)—to a low of two minutes (in 1953, when the United States and the Soviet Union were racing ahead with the testing and deployment of massive thermonuclear weapons) and a high of 17 minutes (in 1991, with the dissolution of the Soviet Union).

Recently, the Bulletin reset the clock, returning it to the two-minute mark. The threat posed to the world by nuclear weapons, the group believes, is now as great as it has ever been.

The most current time change is derived from an analysis of the state of global nuclear affairs, with an emphasis on the nuclear weapons policy and posture of the United States, the crisis with North Korea, and growing tensions between Washington and Moscow (including efforts by Russia to use technology to interfere in democratic elections around the world). While the Bulletin labels itself non-partisan, its message has historically been embraced by the progressive wing of American politics. The decision by the Bulletin to factor in the threats posed by technology and climate change has only strengthened this perception, especially among American conservatives. However, an examination of the issues underpinning its decision to adjust the Doomsday Clock show that, in this case, the warning issued by the Bulletin is sound and worthy of consideration.

The Bulletin’s reset of the Doomsday Clock comes in advance of the publication by the Trump administration of the 2018 Nuclear Posture Review (NPR), the first such document since the Obama administration published its NPR in April 2010. (A draft of the 2018 NPR has been published by the Huffington Post.) The report gives voice to a strategic vision of the Trump administration when it comes to nuclear policy and posture that had been hinted at over the course of the past year. Some aspects of the NPR should come as no surprise—for instance, the $1.2 trillion modernization of the nuclear TRIAD, the manned strategic bombers, land-based intercontinental ballistic missiles (ICBMs), and submarine-launched ballistic missiles (SLBMs) that serve as the heart of America’s nuclear deterrent. An aging deterrent is no deterrent at all if it is not able to function as intended.

Other aspects of the 2018 NPR, however, are disconcerting, and more than justify what would seem to be the prescient resetting of the Doomsday Clock. On the surface, the principles of deterrence outlined in the 2018 NPR are modeled on past policy pronouncements by previous administrations: “[T]o acquire and maintain the full range of capabilities to ensure that nuclear or non-nuclear aggression against the United States, allies and partners will fail to achieve its objectives and carry with it the credible risk of intolerable consequences for the adversary.” However, whereas the 2010 NPR sought to de-emphasize the role of nuclear weapons in deterring a non-nuclear attack (citing improvements in American conventional and anti-missile capabilities) and pointedly embraced Article IV of the nuclear non-proliferation treaty (NPT), which places the onus on states to eventually rid themselves of nuclear weapons, the 2018 NPR makes no mention of Article IV. Instead, it eschews traditional nuclear disarmament pathways in favor of a more aggressive posture that seeks to make nuclear weapons more accessible to American policymakers when formulating deterrence.

This, as they say, is pretty huge.

The Obama administration had continued the Bush-era policy of “open ocean” targeting of ICBMs and SLBMs, ensuring that any accidental launch of a missile would deliver its nuclear payload to the middle of the ocean, thereby reducing the chances of miscalculation of intent. The 2018 NPR, however, allows for “open ocean” targeting for ICBMs only—SLBMs will be exempted. This exemption is part of an overall trend that reverses the Obama-era policy of de-emphasizing the role of nuclear weapons in American military planning and operations. “The United States,” the 2018 NPR declares, “will apply a tailored approach to effectively deter across a spectrum of adversaries, threats and contexts.” This “tailored approach” is reflective of the NPR’s contention that, when it comes to nuclear deterrence, there is no “one size fits all” policy. Rather, the United States will now employ an “expanding range of limited and graduated options” that threaten “intolerable damage” in order to deter nuclear and non-nuclear attacks. Moreover, the NPR states that “combatant commands and service components will be organized and resourced for this mission, and will plan, train to integrate U.S. and non-nuclear forces and operate in the face of adversary nuclear threats and attacks”—in short, the U.S. military will be actively preparing for nuclear war.

The 2018 NPR has a vision of nuclear conflict that goes far beyond the traditional imagery of mass missile launches. While ICBMs and manned bombers will be maintained on a day-to-day alert, the tip of the nuclear spear is now what the NPR calls “supplemental” nuclear forces—dual-use aircraft such as the F-35 fighter armed with B-61 gravity bombs capable of delivering a low-yield nuclear payload, a new generation of nuclear-tipped submarine-launched cruise missiles, and submarine-launched ballistic missiles tipped with a new generation of low-yield nuclear warheads. The danger inherent with the integration of these kinds of tactical nuclear weapons into an overall strategy of deterrence is that it fundamentally lowers the threshold for their use. A recent study done by MIT provides a comparison between an attack on five North Korean nuclear infrastructure targets using ten 450-kiloton warheads delivered by American ICBMs, and an attack against the same target set using 20 .3 kiloton B-61 bombs. The ICBM attack destroys all targets and kills 2 to 3 million North Koreans; the B-61 strike does the same, while limiting casualties to a few hundred deaths at each target. According to press reports, American B-2 bombers are flying practice bombing missions against North Korea, using B-61 bombs as their payload.

Most Americans are familiar, at least in passing, with the possibility of scenarios involving nuclear weapons use against North Korea. Even though the 2018 NPR downplays the possibility, the same holds true with scenarios involving Russia and China. The nuclear deterrence policy laid out in the 2018 NPR, however, uses a much broader brush. Noting that the United States has never adopted a “no first use” policy, the 2018 NPR states that “it remains the policy of the United States to retain some ambiguity regarding the precise circumstances that might lead to a U.S. nuclear response.” In this regard, the NPR states that America could employ nuclear weapons under “extreme circumstances that could include significant non-nuclear strategic attacks.” Moreover, the NPR walked back from previous assurances made by the United States not to use nuclear weapons against signatory nations of the NPR who were in good standing with the provisions of that treaty, promulgating declaratory policy that states that “given the potential of significant non-nuclear strategic attacks, the United States reserves the right to make adjustments in the assurance that may be warranted by the evolution and proliferation of non-nuclear strategic attack technologies and U.S. capabilities to counter that threat.”

The issue of “non-nuclear strategic attack technologies” as a potential precursor for nuclear war is a new factor that previously did not exist in American policy. The United States has long held that chemical and biological weapons represent a strategic threat for which America’s nuclear deterrence capability serves as a viable counter. But the threat from cyber attacks is different. If for no other reason than the potential for miscalculation and error in terms of attribution and intent, the nexus of cyber and nuclear weapons should be disconcerting for everyone. According to the parameters outlined in the 2018 NPR, a nuclear strike could be considered in cases where a nation, like Iran, that has been subjected to a cyberattack initially perpetrated by the United States or its allies, decides to repurpose the malware and counterattack.

Even more disturbing is the notion that a cyber intrusion such as the one perpetrated against the Democratic National Committee and attributed to Russia could serve as a trigger for nuclear war. This is not as far-fetched as it sounds. The DNC event has been characterized by influential American politicians, such as the Armed Services Committee Chairman John McCain, as “an act of war.” Moreover, former vice president Joe Biden hinted that, in the aftermath of the DNC breach, the United States was launching a retaliatory cyberattack of its own, targeting Russia. The possibility of a tit-for-tat exchange of cyberattacks that escalates into a nuclear conflict would previously have been dismissed out of hand; today, thanks to the 2018 NPR, it has entered the realm of the possible.

The 2018 NPR speaks of an “expanding range of limited and graduated responses” available to American commanders as if this is a new concept. The fact is, American nuclear planners have always sought to provide the decision makers with as broad a range of options as possible when it came to the employment of nuclear weapons. The difference today is that the United States is actively considering the use of nuclear weapons in a first-strike capacity involving non-nuclear threats. It is this posture that represents the game changer—any potential nuclear-armed adversary must now factor in the probability, during times of crisis, of an American nuclear first strike. The logical response is for these potential adversaries to be prepared to launch a preemptive first strike of their own against the United States.

General Lee Butler, the last Cold War-era commander of Strategic Command, which is responsible for America’s nuclear forces, has said that, when faced with the threat of imminent simulated nuclear attack, the national command authority always opted for Massive Attack Option-4—a full-scale nuclear counterattack, which would condemn more than 200 million people to death. Butler, like many of his Cold War-era colleagues and counterparts who lived under the constant reality of nuclear brinksmanship, has become a proponent of the “Global Zero” movement, seeking the worldwide abolition of nuclear weapons. The 2018 NPR, while applauding that goal, has noted that before any movement toward that objective can occur, a “fundamental transformation of the world political order needs to occur.”

The Obama administration had tried to take steps toward such a transformation, an effort that was reflected in the 2010 NPR. The 2018 NPR has propelled the United States in the opposite direction, embracing a nuclear posture that lowers the threshold for the use of nuclear weapons while ignoring altogether the framework of disarmament, founded in the bedrock commitment made by all nuclear powers under Article IV of the NPT. Only the United States can provide the leadership to achieve the “fundamental transformation of the world political order” necessary to affect nuclear abolition. The Bulletin of American Scientists has set the nuclear Doomsday Clock to two minutes until midnight; the fundamental question facing America today is whether its leaders can affect the needed transformation before time runs out.

Scott Ritter is a former Marine Corps intelligence officer who served in the former Soviet Union implementing arms control treaties, in the Persian Gulf during Operation Desert Storm, and in Iraq overseeing the disarmament of WMD. He is the author of Deal of the Century: How Iran Blocked the West’s Road to War (Clarity Press, 2017).