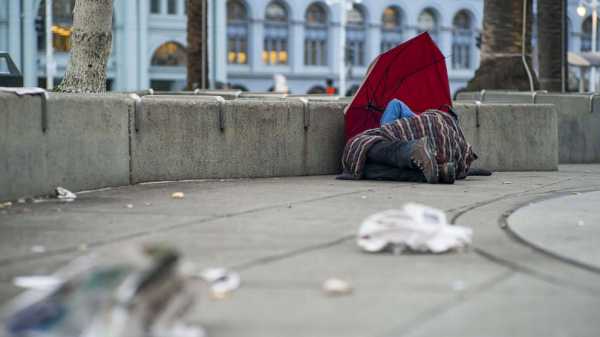 (MORE: Trump targets California for plan to deal with homeless on ‘our best streets’)

The administration and the state have also clashed frequently in court since Trump came into office; the California attorney general says they have filed 60 lawsuits to block decisions under the current administration.

Last Friday, Trump said the EPA would tell San Francisco the city is violating environmental laws by failing to address pollution flowing into the ocean from homeless encampments.

“EPA is going to be putting out a notice,” he said. “They’re in serious violation.”

Cars drive past the a homeless encampment along a street in Berkeley, Calif., May 22, 2019.

He added, “They have to clean it up. We can’t have our cities going to hell.”

In response to a question about whether the administration was singling out the state for political reasons, a senior EPA official said “the letter speaks for itself” in laying out the agency’s environmental concerns.

Wheeler also told reporters at an unrelated event Thursday morning that he has been looking into the issue of drinking water in California since he was asked about it in a congressional hearing in March and that he has discussed the issue of state oversight of water programs with the White House.

In 2011, the Obama administration issued a similar letter to the state of Wisconsin raising concerns about the state’s oversight of discharged water that could violate federal clean water rules. An EPA senior official told reporters many water systems around the country have problems with storm-water discharge but that most states will work with EPA to resolve any violations.

Wheeler asked state officials to respond in 30 days outlining how they will address the concerns described in the letter.