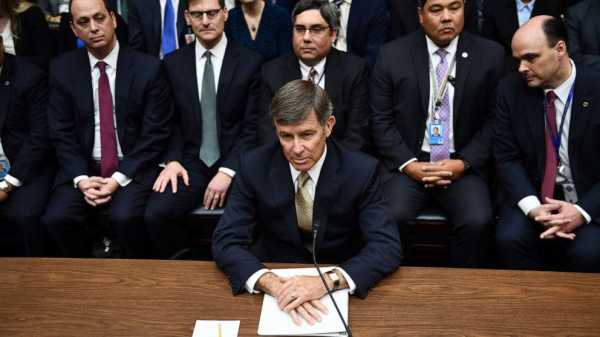 “Sir, you released a statement yesterday affirming your oath to the Constitution and your dedication to the rule of law. I’m having trouble understanding how that statement can you true in light of the facts here,” Democratic Rep. Andre Carson asked.

“A couple things,” Maguire responded. “The White House did not direct me to withhold the information. Neither did the office of legal counsel. That opinion is unclassified and has been disseminated. The question came down to urgent concern, which is a legal definition. It doesn’t mean is it important, is it time urgent concern met the criteria we discussed several times here.

“All that did was just take away the seven days. As I said before, just because it was not forwarded to this committee does not mean that it went unanswered. The IC IG and the Justice Department referred it to the Federal [Bureau] of Investigation for investigation. And that was working while I was endeavoring to get the executive concerns addressed,” Maguire continued.

“It was not stonewalling. I didn’t receive direction from anybody. I was trying to work through the process and the law the way it is written. I have to comply with the way the law is, not with the way some people would like it to be. If I could have done otherwise, it would have been more convenient for me,” Maguire said.

“Director, were you ever advised by the White House not to provide this complaint to congress for any reason?” Democrat Rep. Jim Himes asked.

“Did you ever speak to the president about this complaint?” Himes continued. 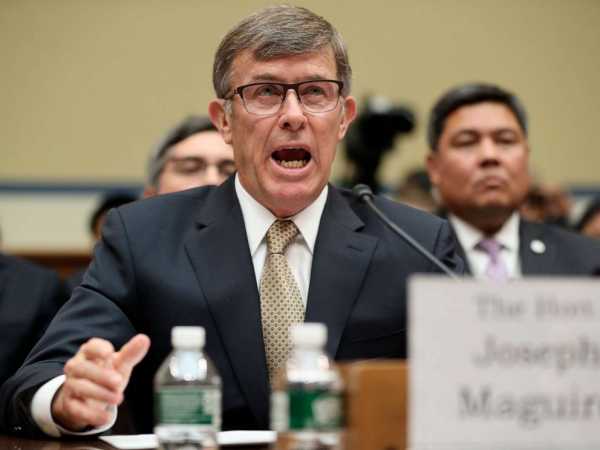 “But just so we can be clear for the record, you are not denying that you spoke to the president about this complaint? ” Himes asked.

“What I’m saying, congressman, is that I will not disclose privileged conversations that I have, as director of national intelligence, with the president,” Maguire said.

“Has the White House instructed you to assert that privilege?

“No, sir,” Maguire answered. “It’s just a member of the executive committee – I mean executive branch – as a member of the National Security Council and the Homeland Committee, and I have to maintain the discretion and protect the conversation with the president of the United States.”

Ranking Member Devin Nunes pushed Maguire on the “leaks” that led to the first media reports of the complaint, suggesting that they had come from inside the intelligence community.

“So, did you, you or or anybody in your office leak this to “The Washington post” or NBC News? he asked Maguire.

“It was not from the intelligence community, from me or from my office,” Maguire answered.

Nunes ended by telling Maguire to “have fun” and “be careful what you say” because it would be used against him.

“Would you agree that the whistleblower complaint alleges serious wrongdoing by the president of the United States?” Schiff asked. 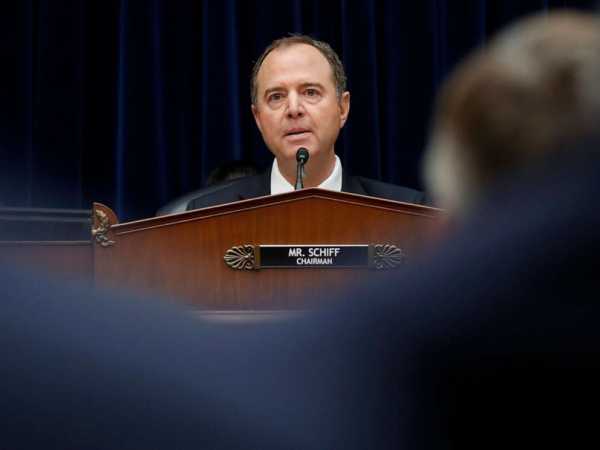 “The whistleblower complaint involved the allegation of that. It is not for me in the intelligence community to decide how the president conducts foreign policy.,” Maguire answered.

“It was urgent and important,” Maguire responded. “But my job as the director of national intelligence was to comply with the whistle-blower protection act and adhere to the definition of urgent concern, which is a legal term.” 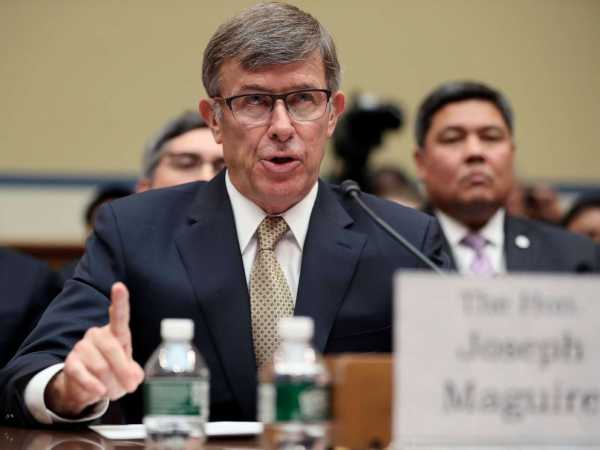 “I did not go for a second opinion. The question was, is the formation contained here subject to executive privilege, not whether it not — whether it met urgent concern. We went to the White House first,” Maguire answered.

“Mr. Chairman, as I said in my opening statement, I believe everything here in this matter is totally unprecedented.”I believe the whistle-blower followed the steps every step of the way. However, the statute was one in this situation involving the president of the United States who is not in the intelligence community or matters underneath. I think the whistle-blower did the right thing. I believe that the situation we have and why we’re here this morning is because this case is unique and unprecedented,” McGuire said.

Maguire then explained that he blocked the complaint from being turned over to Congress — as Democrats say the law requires — after being advised by the White House of executive privilege concerns.

“Upon reviewing the complaint, we were immediately struck by the fact that many of the allegations in the complaint are based on a conversation between the president and another foreign leader. Such calls are typically subject to executive privilege,” Maguire said.

“As a result, we consulted with the White House counsel’s office and we were advised much of the information the complaint was in fact subject to executive privilege — a privilege that I do not have the authority to wave. Because of that, we were unable to immediately share the details of the complaint with this committee,” he said.

“After reviewing the complaint, and the inspector general’s transmittal letter, the office of legal counsel determined the complaint allegations do not meet requirement of urgent concern and found I was not legally required to transmit the material to our oversight committee under the whistleblower protect act,” Maguire continued. “I want to stress I believe the whistleblower and the inspector general have acted in good faith throughout. I have every reason to believe that they have done everything by the book and followed the law.”

“Until a week ago, the need to protect that process was a primary bipartisan concern of this committee. If the Democrats were really concerned with defending that process, they would have pursued this meter with a quiet, sober inquiry as we do for all whistle-blowers. That would have been useless for them. They don’t want answers. They want a public spectacle,” Nunes said. “This latest gambit is unhinged and dangerous. They should end the dishonest spectacle and get back to work to solving problems, which is what every member of this committee was sent here to do.” 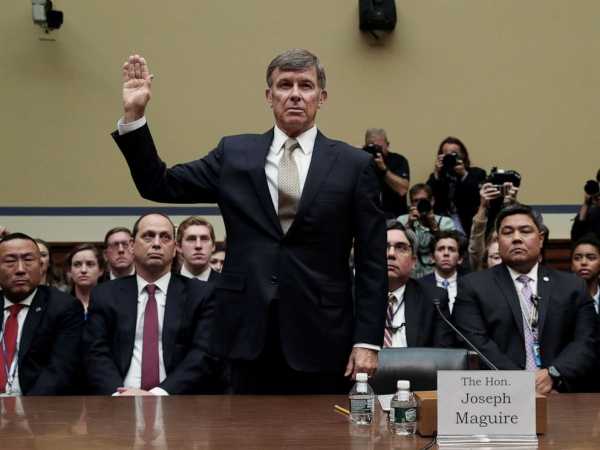 Acting Director of National Intelligence Joseph Maguire is sworn in to testify before a House Intelligence Committee on Capitol Hill in Washington, D.C., Sept. 26, 2019.

“Before I turn to the matter of hand, there are a few things I would like to say. I am not partisan and I am not political,” he said. “Throughout my career, I have served and led through turbulent times. I have governed every action by the following criteria. It must be legal. It must be moral. And it must be ethical.

“In my nearly four decades of public service, my integrity has never been questioned until now. I am here today to state that as acting DNI, I will continue the same faithful and non-partisan support in a matter that adheres to the constitution and the laws of this great country,” Maguire said.

“I want to congratulate the Democrats on the rollout of their latest information warfare operation against the president and their extraordinary ability to once again enlist the mainstream media in their campaign,” Nunes said.

“Once again, this supposed scandal ends up being nothing like what we were told and once again the Democrats, their media mouthpieces and leakers are ginning up a fake story with no regard to the monumental damage they are causing to our public institutions and to trust in government,” Nunes said.

“It would be funny if it wasn’t such a graphic portrayal of the president’s oath of office. But as it does represent a real betrayal, there’s nothing the president says here that is in America’s interest after all. It is the most consequential form of tragedy,” Schiff continued.

“Although by means — no means — the only issue raised by the whistleblower’s complaint which was shared with the committee for the first time only late yesterday. By law, the whistleblower complaint, which brought this gross misconduct to light, should have been presented to this committee weeks ago and by you, Mr. Director, under the clear letter of the law. Yet it wasn’t,” Schiff said. 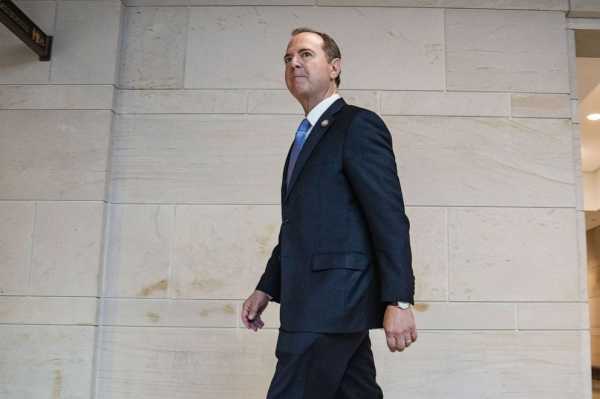 (MORE: Read the transcript of Trump’s call with the Ukraine president )

Lawmakers received access to the classified complaint on Wednesday after Schiff had subpoenaed the DNI for the materials and after the Trump administration released a memorandum about the call between Trump and Zelenskiy. The memo is not verbatim.

“I found the allegations deeply disturbing and very credible,” Schiff said Wednesday night, after describing Trump’s call “far more damning than I or many others imagined.”

Democrats have launched a formal impeachment inquiry over the complaint and Trump’s comments during the phone call, in which he urged Zelenskiy to work with the Justice Department to investigate Joe Biden’s son Hunter and his business dealings in Ukraine when his father was vice president. 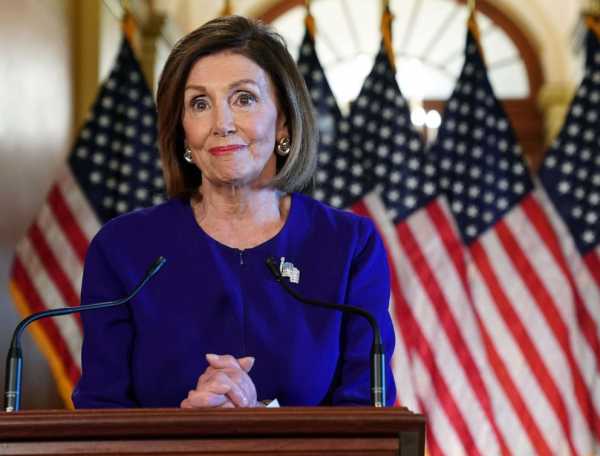 (MORE: Speaker Pelosi has called for an impeachment inquiry. What happens next?)

House Democratic leaders, led by House Speaker Nancy Pelosi, continued to organize their impeachment efforts behind closed doors on Wednesday, weighing the scope of their renewed impeachment investigation and whether it should encompass more than the complaint and Trump’s comments to the Ukrainian president, according to a Democrat familiar with the deliberations. 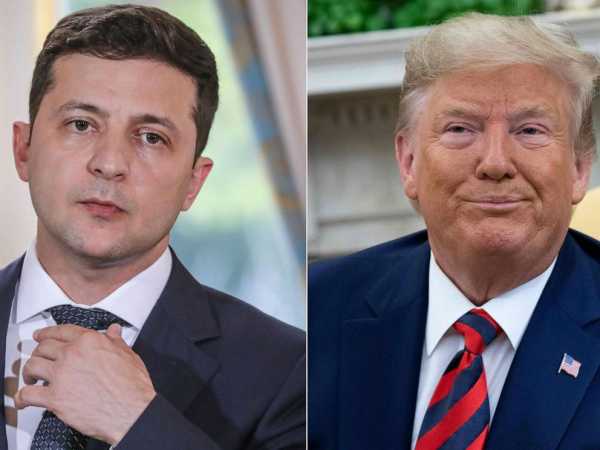 Many Republicans continued to defend the president on Wednesday after the release of the transcript, arguing that his comments to Zelenskiy and the call did not include a quid pro quo regarding the nearly $400 million in foreign aid that Trump had ordered his acting chief of staff Mick Mulvaney to hold back ahead of the July phone call. They said Democrats were working to damage Trump politically in an effort to reverse the results of the last presidential election.

A few Republicans, including Sens. Mitt Romney of Utah and Ben Sasse of Nebraska, expressed concern with the details of Trump’s call. Romney described them as “deeply troubling.”

In a statement released Wednesday, Maguire refuted a Washington Post report that he had threatened to resign if the White House attempted to keep him from testifying freely before Congress.

“At no time have I considered resigning my position since assuming this role on Aug. 16, 2019,” he said. “I have never quit anything in my life, and I am not going to start now. I am committed to leading the Intelligence Community to address the diverse and complex threats facing our nation.”

Maguire will testify before the Senate Intelligence Committee behind closed doors later in the day.

Schiff said he is still seeking to interview the author of the complaint, though it’s unclear if both parties had reached an agreement Wednesday night. Lawmakers said Wednesday that they did not expect to publicly discuss the details of the complaint, due to its classification.