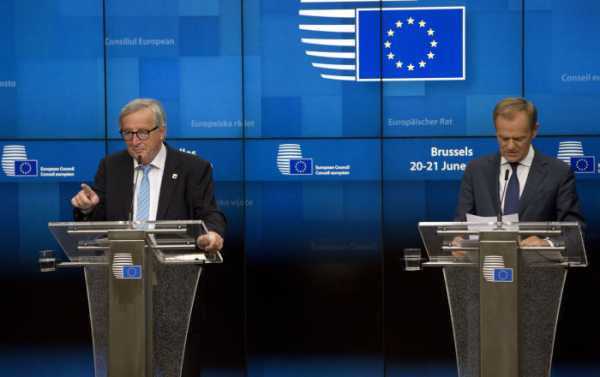 European leaders gathered in Brussels on Thursday for a major two-day summit to discuss global security, climate change, and other major issues. The second part of the summit is due to take place on Friday.

During the summit, the EU leaders voted for extension of sanctions against Russia for 6 more months, as existing sanctions expire on 31 July. The sanctions were introduced over reconciliation of Crimean peninsula with Russia via a referendum, which Ukraine and the EU considers an “annexation.” According to UN Special Rapporteur on the negative impact of the unilateral coercive measures, Idriss Jazairy, the EU suffered more from Russia’s retaliatory sanctions, as Russia managed to mitigate the economic effects by ramping up domestic production.

The European Council President, Donald Tusk, said that the vast majority of the bloc’s member states had committed to carbon neutrality by 2050.

“We also discussed how to ensure the climate neutral EU in line with the Paris Agreement. A vast majority of member states has committed to climate neutrality by 2050. But reaching unanimity was not possible today”, Tusk told a press conference on the results of the first day of the council summit in Brussels.

In its conclusions on the first day of the summit, the council noted the importance of improving the environment in cities.

Apart from its long-term 2050 climate action strategy, the European Union has adopted the binding packages of measures for 2020 and 2030. They include reducing greenhouse gas emissions, increasing energy efficiency and switching to renewable energy sources.

The European Council said in conclusions on its summit, that Brussels seeks to fight unfair extraterritorial trade measures, and ensure fair competition.

“In a world where common rules and standards are increasingly questioned, it will be vital to promote a level playing field, including in the area of trade. This means ensuring fair competition within the EU and on the global stage, promoting market access, fighting unfair practices, extraterritorial measures and security risks from third countries, and securing our strategic supply chains,” the European Council said in the conclusions on its meeting on Thursday.

The European Union has repeatedly said it did not recognize the extraterritorial application of laws adopted by third countries. This, particularly, concerned the bloc’s opposition to the high-profile US withdrawal from the Iran nuclear deal and the subsequent re-imposition of its sanctions, requiring companies across the world to drop their partnerships with the Middle Eastern country.

Juncker Threatens Turkey With Measures Over Activities in Cyprus’s Waters

The European Commission President, Jean-Claude Juncker, said on Friday that Turkey’s activities off the coast of Cyprus were unacceptable, saying that the commission will take “not soft” action to respond to this conflict.

Cyprus, supported by the European Union, has been protesting Turkey’s drilling off its coast where gas fields have been discovered. Ankara, in its turn, claims rights for natural resources in the area.

“We are in full solidarity with Cyprus. What Turkey is doing in the territorial waters of Cyprus is totally unacceptable. The [European] Commission has been charged to propose measures to be taken as soon as possible, when it comes to this conflict, and will do so. And this will not be soft measures,” Juncker told reporters at a press conference on the results of the first day of the ongoing European Council meeting.

Donald Tusk said the EU heads of state and government had failed to agree on candidacies for key positions within the bloc’s leadership, saying that a special summit dedicated to this issue will be convened on 30 June.

“There was no majority on any candidate […] [The council] will meet again on the 30th of June”, Tusk told a press conference on the results of the first day of the June European Council summit.

A month after the European Parliament elections, the bloc reportedly stalled between various parliamentary groups. The situation is aggravated by the fact that two allies, Germany and France, seem to be on the opposite sides of the barricade over the candidate who will replace Juncker.

The European Council said that it would enhance its defence investment and continue cooperation with its NATO partners.

“The EU also needs to take greater responsibility for its own security and defence, in particular by enhancing defence investment, capability development and operational readiness”, the statement, released following the meeting, said.

The bloc continued to develop cooperation with its allies across the Atlantic and NATO members.

“[The European Union] will cooperate closely with NATO, in full respect of the principles set out in the Treaties and by the European Council, including the principles of inclusiveness, reciprocity and decision-making autonomy of the EU”, it added.

The union vowed to increase resources to shield the member states from cyberattacks and fake news.

“We must protect our societies from malicious cyber activities, hybrid threats and disinformation originating from hostile State and non-State actors. Addressing such threats requires a comprehensive approach with more cooperation, more coordination, more resources and more technological capacities”, it added.