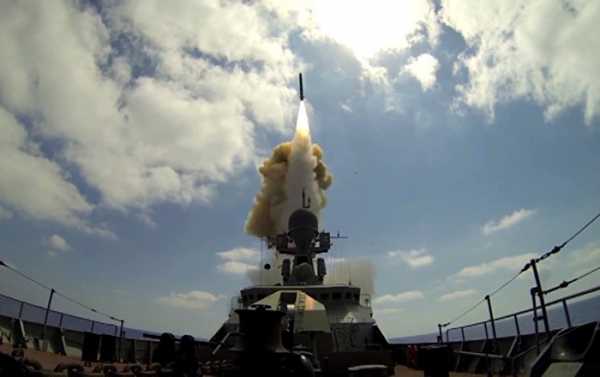 The Russian naval squadron’s deployment in the Mediterranean Sea is aimed at maintaining stability in the war-torn Syrian region, protecting Russia’s southern borders and serving as a “helping hand” to the Black Sea Fleet.

The mission of Russian warships equipped with the 3M-54 Kalibr (NATO codename SS-N-27 Sizzler and SS-N-30A) cruise missiles deployed in the Mediterranean Sea on permanent standby could accomplish a wide range of tasks besides tackling the terror threat in the troublesome Middle Eastern region, analysts told Sputnik.

“Due to the remaining threat of incursions by international terrorists in Syria, our ships carrying Kalibr cruise missiles will be constantly deployed in the Mediterranean Sea,” President Vladimir Putin announced at a meeting with Defense Ministry officials on May 16 specifying that a total of 102 voyages by Russian military vessels are scheduled for 2018.

According to Konstantin Sivkov, a military analyst and member of the Russian Academy of Sciences, Kalibr’s tasks do not end here: The country’s powerful long-range weapon could also protect Russia’s “underbelly” from a potential adversary.

“During the Cold War, the 5th operational squadron of the Soviet Navy was operating on a permanent basis in the Mediterranean Sea,” Sivkov recalled. “American aircraft carriers could conduct strikes on the USSR from the eastern part of this water area through the territory of Turkey. [Russia’s] southern ‘underbelly’ was under threat. The main task of ships and submarines of the squadron was to prevent the potential enemy from reaching the assault line and [attack the country] in case of a military conflict.”

Thus, in mid-May, Neustrashimy-class frigate Yaroslav Mudry kept an eye on the USS Harry S. Truman which was accomplishing its tasks in the eastern part of the Mediterranean Sea. As the UK ITV network remarked, the two were “playing cat and mouse” in the region. Actually the Russian frigate played the role of a “direct tracking ship.”

Sivkov described a hypothetical scenario of a military conflict in the region to clarify the strengths of the Russian military grouping.

He explained that in case of aggression, a “direct tracking ship” could transfer the coordinates of an adversary’s carrier strike group (CSG) to the command.

“It’s here that our squadron’s Kalibrs would come in handy,” the military analyst highlighted. “The CSG would be hit by cruise missiles launched from surface ships, Project 949 nuclear submarines deployed in the Mediterranean, and diesel-electric Varshavyanka-class submarines (Project 636.3). Russia’s aviation would support the fleet. Russia’s warplanes Su-34 and Su-24 would take to the air from Hmeymim [air base]. They would be joined by the long-range aviation, namely missile carriers Tu-22M3.”

Sivkov explained that to disable an aircraft carrier, one needs to either break its take-off deck or hit the board. In the latter case, the ship would give a lurch so that the adversary’s warplanes would be unable to take off from it. As a result, the CSG would lose its main weapon. 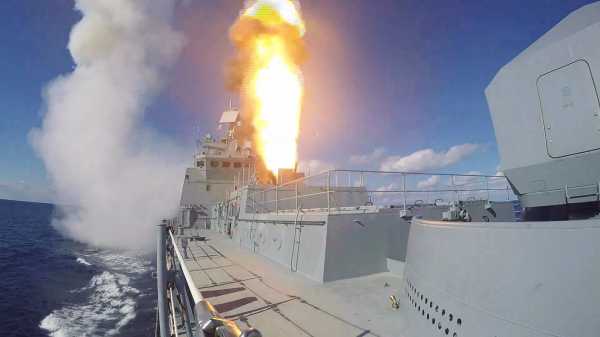 Mediterranean Task Force to Back the Black Sea Fleet

Yet another possible reason behind the squadron’s buildup is the necessity to support the Black Sea Fleet in case of the aggravation of tensions with the NATO bloc. The problem is that if the Western alliance closes the Bosporus, the Black Sea Fleet ships would find themselves blocked.

Under these circumstances, the Kalibr-equipped warships would become indispensable.

“The striking range of [Kalibr] cruise missiles is big enough to solve a wide range of tasks,” Alexei Leonkov, a former employee of the 30th Central Research Institute of Russia’s Aerospace Force, told Sputnik. “They could reach the shores of Malta as well as part of the Persian Gulf and most of the territory of its coastal states and the Suez Canal.”

He emphasized that if necessary, Russian warships could come to the rescue of India, the country’s BRICS ally. The Kalibr long-range cruise missiles will allow the Mediterranean task force to conduct various strategic operations and deter potential enemies.

The Kalibr family includes land attack cruise missiles (LACM) with a range of up to 2.5 thousand kilometers, as well as anti-ship rockets that reach a supersonic speed of over Mach 2 in the final section of the trajectory; the Kalibr anti-submarine torpedoes could hit a probable enemy’s underwater vessels.

The Pentagon has already reacted to Russia’s recent deployment in the Mediterranean.

On May 17, US Naval Forces in Europe and Africa Commander Admiral James Foggo III told Sputnik that while the US Navy is by no means seeking a conflict with Russia, it is prepared to defend its interests in the region.

“Our maritime forces are ready and prepared to defend. We do not, however, seek conflict with other forces operating in the area,” Foggo elaborated.

Commenting on the remark, Leonkov opined that the Pentagon is dissatisfied with the fact that there are powers that obtain long-range cruise missiles on par with its Tomahawks.

The analyst emphasized that earlier, the US-led coalition conducted its joint April 14 missile strike on Syria from a distant spot in the Mediterranean Sea in order to avoid the zone covered by Russia’s Kalibrs in the region.

“The firing position was uncomfortable, and the flying time to the target was great,” Lenkov noted. “This allowed the Syrian air defense units to prepare and efficiently intercept the missiles.”

The Russian Defense Ministry later reported that out of 103 rockets fired by the coalition, the Syrians managed to intercept 71 missiles.

At the same time the Russian Navy’s operations along distant shores is excellent training for the crews, the analyst remarked.

In the course of the Russian air campaign in Syria, which kicked off in 2015, the country’s naval forces have repeatedly struck Daesh (ISIS/ISIL)* and al-Nusra Front’s* positions in Syria, targeting command posts, communications centers, arms and ammunition depots. Every time, the weapon demonstrated high-precision combat capabilities.