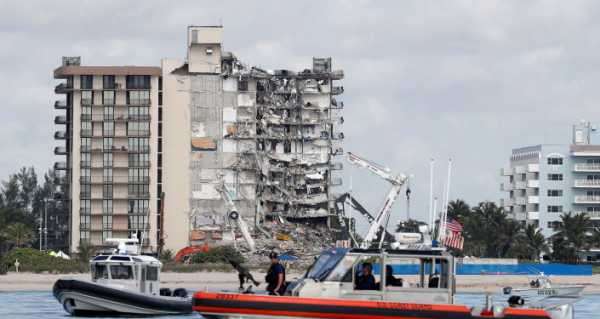 Search and rescue work at the partially collapsed Champlain Towers South condo, north of Miami Beach, Florida, was suspended on Saturday as preparations were undertaken for the demolition of the remainder of the building. At least 24 people were killed in the deadly incident on 24 June, with many more fatalities feared.

As search and rescue crews temporarily paused operations at the site of the partially collapsed Champlain Towers South condominium on Saturday ahead of the demolition of the remainder of the building, Surfside Mayor Charles Burkett paid tribute to the community that had rallied together.

The mayor weighed in on the concerns expressed by residents of the sister tower, located about a block away and built a year after the collapsed building in 1982. Many were still unsure whether to stay in their homes or evacuate.

Burkett said a charity that has already raised more than $3 million was prepared to cover the costs of alternative housing for those eager to move out.

Rescue personnel continue the search and rescue operation for survivors at the site of a partially collapsed residential building in Surfside, Florida, U.S. July 2, 2021.

Meanwhile, a “top-to-bottom review” of the structure is to be carried out, expected to take about 30 days.

Over a week has passed since the tragedy on 24 June that left at least 24 people dead, with the possibility of many more fatalities as authorities said on 3 July that as many as 124 people remained missing. It is still being determined how many people were actually in the building when it folded.

The beach-side building was erected in 1981, was 13 stories tall and had 135 units, at least half of which collapsed.

Part of the collapsed building that is still standing will be demolished in the coming days as there have been fears it might not withstand the onslaught of Tropical Storm Elsa that is supposed to hit Florida on Tuesday.

As an investigation continues into the reasons for the building’s collapse, experts who have examined video footage suggest a single failure could have set off what has been termed as “progressive collapse”.

Everything from design flaws to insufficiently robust construction due to building codes acceptable four decades ago has been cited amid speculations on the causes of the tragedy.

​The building had been about to undergo extensive repairs as part of a review and recertification process for 40-year-old buildings, Kenneth S. Direktor, a lawyer involved in the project, was cited as saying by media.

In a 2018 report, which has been cited by outlets since the tragedy struck, a consultant had discovered evidence of “major structural damage” to the concrete slab below the pool deck. Furthermore, concerns had been triggered by the “abundant” cracking and crumbling of the columns, beams and walls of the parking garage under the building.