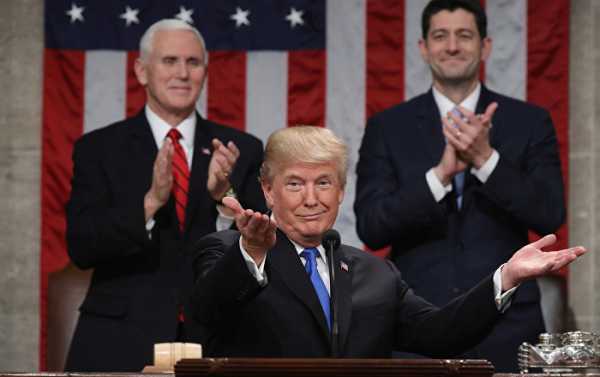 Donald Trump’s State of the Union 2018 address has not caught analysts by surprise, RIA Novosti contributor Gevorg Mirzayan writes, outlining the major topics of Washington’s domestic and foreign strategy voiced by the US president.

US President Donald Trump’s State of the Union 2018 address delivered on January 30 could be divided into two parts, Mirzayan writes, adding that the first one was aimed at American voters, while the second part revealed what the future has in store for the world under the US’ leadership.

According to the scholar, Trump jumped at the opportunity to emphasize his administration’s achievements amid the ongoing defamation campaign carried out by his political opponents, including former Democratic presidential hopeful Hillary Clinton and left-leaning US mainstream media.

“The interim goal of the campaign is to ‘impart toxicity’ to Trump, discredit the Republican Party pave the way for the victory of the Democrats in the mid-term congressional elections,” Mirzayan, an associate professor at the Department of Political Science at the Finance University of the Russian Government, underscored.

During his speech Trump pointed out that the country’s unemployment rates had fallen with African-American and Hispanic American unemployment reaching the lowest levels in history.

“Since the election, we have created 2.4 million new jobs, including 200,000 new jobs in manufacturing alone. After years of wage stagnation, we are finally seeing rising wages,” Trump said.

The scholar remarked that Trump paid special attention to explaining the benefits of his tax reform: “In fact, he appealed to the old America’s principle that ‘the one who works a lot, earns a lot’.”

Thus, Trump demonstrated that he had delivered on his election promise to revive an America that had been sacrificed to globalism and financial capitalism by previous presidents, Mirzayan noted.

“America is a nation of builders,” Trump continued. “We built the Empire State Building in just 1 year — is it not a disgrace that it can now take 10 years just to get a permit approved for a simple road?”

As for immigration, the US president has made certain concessions to the Democrats, by reserving the possibility to legalize 1.8 million illegal migrants who arrived in the United States as children, but only if these people “meet education and work requirements, and show good moral character.”

However, he proclaimed the need to end chain migration: “Under the current broken system, a single immigrant can bring in virtually unlimited numbers of distant relatives,” the Trump said. “Under our plan, we focus on the immediate family by limiting sponsorships to spouses and minor children.” 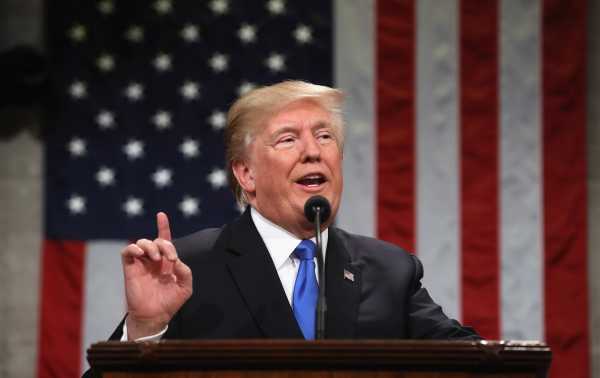 U.S. President Donald Trump delivers his first State of the Union address to a joint session of Congress inside the House Chamber on Capitol Hill in Washington, U.S., January 30, 2018

While outlining the US foreign policy Trump echoed the US National Security Strategy announced in December, Mirzayan noted, summarizing it as a “focus on ‘hard power’ at the expense of the ‘soft’ one.”

According to the scholar, Trump put the emphasis on the development of nuclear forces, the denial of civil rights to terrorists and cracking down against Washington’s opponents — the so-called “rogue regimes,” terrorist groups and “rivals” like Russia and China — because “weakness is the surest path to conflict, and unmatched power is the surest means of our defense.”

Mirzayan has thrown Trump’s latter statement into question citing the US president’s obvious inability to pressure North Korea, Iran, Russia and China into making concessions in the first year of his presidency.

“However, the president’s stance has its own logic,” the scholar wrote. “Trump is limited in using ‘soft power’ due to the ongoing internal conflict in [Washington] and the abandonment of his ideas and views by Western globalist leaders. Therefore, he believes that he can solve all foreign policy issues by exercising a tough approach — even if it is a temporary solution and even if it causes damage to the American reputation and leadership.”

On the other hand, Trump is seeking to diminish America’s role in various international institutions, promoting the “America First” vision.

If Trump is really intending to limit America’s global leadership this way, it is good news, Mirzayan pointed out, suggesting that the new multi-polar world needs not a hegemon, like the US, but a “collective” leader which would cope with international affairs.