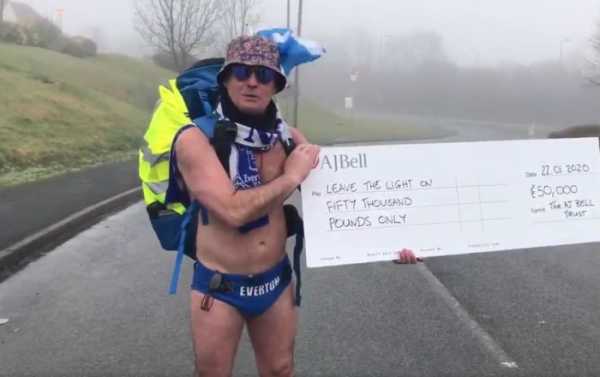 Michael Cullen got his nickname because of the swimwear brand he is donning on his solo charity journey. The funds raised will go to community projects that help disadvantaged young people.

Mick, 55, set out on his journey on 11 December in John O’Groats at the top of Scotland. He is currently in central England and plans to get to the bottom of the country.

His goal is to raise money for Leave the Light On, a charity he helped set up that supports community projects.

According to his page on GoFundMe, the money he raised has already surpassed the initial target of £100,000. Half of that money came from AJ Bell Trust, one of the country’s largest investment platforms.

An ardent Everton fan, he is wearing a beanie and a football scarf, but the main garment is a pair of blue Speedo’s with the club’s name.

He says he loves seeing the shocked faces of passengers and drivers passing by him: “The laughs and the smiles I’ve seen. You wouldn’t believe the messages I’ve been sent. I’m absolutely overwhelmed.”

In this video, Speedo Mick can be seen dancing to Don’t Stop by Fleetwood Mac as cars drive by on a highway.

He swam the English Channel for charity some six years ago, and says he has raised about $325,000 for charity in recent years.

Earlier this month, he received a calf injury and had to rest up for a week after being treated by Everton’s medical staff at the club’s training ground for a calf injury.

And Liverpool, Everton’s local rivals, welcomed him as a guest at their home stadium Anfield during a Merseyside derby in the FA Cup third-round match on 5 January.