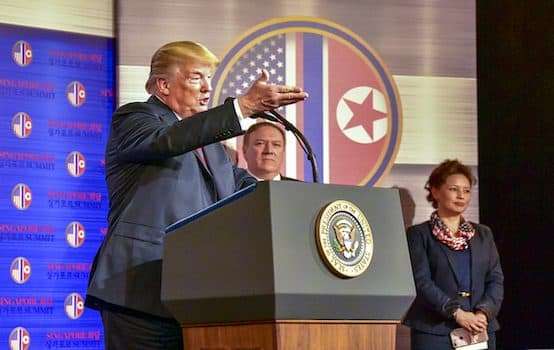 The Singapore summit between the United States and the Democratic People’s Republic of Korea was quite a spectacle, but the show the two leaders put on produced virtually nothing of substance. If we judge this summit the way we would judge a high-level meeting held by any other president, it’s clear that it failed to deliver what the administration wanted. This wasn’t a great accomplishment for the president, though he has a strong incentive to present it that way and continue on the diplomatic track for now. Despite its disappointment, however, if the summit is followed up by productive negotiations, it could still reduce tensions between Washington and Pyongyang.

The consensus among Korea and arms control experts is that the statement that the Singapore summit produced was not nearly as comprehensive or specific as previous agreements with North Korea. That much is indisputable. There was no specific commitment by Pyongyang to get rid of its nuclear weapons, much less its entire nuclear program; no mention of rejoining the Non-Proliferation Treaty (NPT); and no reference to ratifying the Comprehensive Test Ban Treaty. Nothing about North Korea’s missile program appears in the text. There is also nothing about verification. If the purpose of the summit was to make progress on disagreements over nuclear weapons and missiles, it didn’t do that at all.

But then this round of U.S.-North Korean negotiations is only just getting started. The decision to hold a high-level meeting first and then hammer out the details later means that the summit could not possibly have produced an agreement as thorough or meaningful as previous negotiations did. Many critics of the summit, myself included, objected to the meeting for just this reason. This was not because we opposed seeking a diplomatic solution to the standoff with North Korea, but because we saw no value in holding a summit at the start of a process instead of reaching an agreement first through detailed negotiations carried out by officials who understand these issues. As it happened, the U.S. delegation lacked the technical experts that it needed to reach a more substantive agreement, and the president made no effort to prepare himself to talk about the technical issues. The critics’ objection that the summit was held too soon appears to have been vindicated.

One pitfall of holding the summit first is that it will give hardliners in the U.S. an opening to sabotage further talks. They will try to use the summit’s lack of substance as proof that all engagement with North Korea is a waste of time. If North Korea committed to nothing concrete and specific in a meeting with the president, they will say, what are the chances that Pyongyang will agree to anything in talks between lower-level officials? We already know that John Bolton believes diplomacy with North Korea is useless, and we should expect him and his ideological allies to be making that point to Trump on a regular basis. If negotiations don’t move along as quickly as the impatient president would like, that could give Bolton his chance to derail the entire process. Hardliners are sure to seize on Trump’s announcement that he is suspending military exercises in South Korea without consulting Seoul as an excuse to undermine the negotiations. Because Trump’s decision seems to be a unilateral concession made without coordinating with allies, it makes it very easy for hardliners within and outside of the administration to use this to discredit engagement as a whole.

The threats to continued diplomacy with North Korea won’t be limited to Republican rejectionists. Several hawkish Senate Democrats have already declared in a grossly irresponsible letter sent before the summit that they are determined to oppose any agreement that falls short an absurdly high standard. Given the choice between supporting diplomatic engagement or sabotaging a high-profile Trump initiative, many partisan opponents may choose the latter regardless of the consequences. That would be a mistake, but it is probably unavoidable given the cynical and partisan nature of Republican opposition to every Obama diplomatic initiative, including Trump’s decision to renege on the nuclear deal with Iran.

That decision seems even more ludicrous now than it did a month ago. When we compare the rigorous verification measures and specific technical requirements in the Iran deal with the generic rhetorical commitments in the Singapore document, the value of the JCPOA as a nonproliferation agreement becomes even harder to ignore. Almost any deal that the Trump administration could realistically negotiate with North Korea will fall far short of the one that he once derided as the worst deal ever.

Our government should never be afraid to talk with its adversaries when it can advance our country’s interests by doing so. Continued diplomatic engagement with North Korea is the right course and the best option available. In order to have any success, however, the administration will need to reduce its demands, lower its expectations, be willing to compromise, and coordinate more closely with South Korea.

Daniel Larison is a senior writer and regular blogger for TAC.