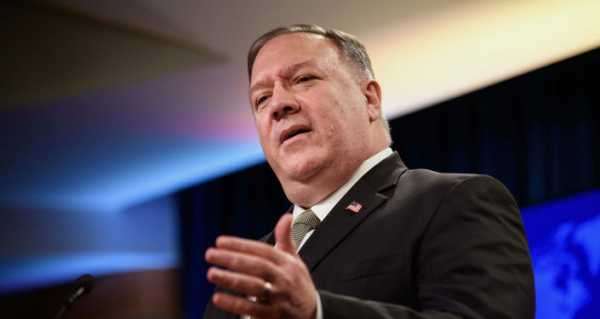 Late last week, US Secretary of State Mike Pompeo said that all the UN sanctions against Iran are coming into force and that Washington is ready to punish those UN Security Council members who are against the sanctions.

US Secretary of State Mike Pompeo has announced new sanctions on Iran’s Defence Ministry and other Iranian officials involved in the country’s nuclear and missile programmes.

Pompeo told reporters on Monday that the US specifically slapped sanctions on two individuals who he claimed play an essential role in Iran’s uranium enrichment operations.

Separately, the secretary of state said that the new US sanctions were imposed against Venezuelan President Nicolas Maduro over him bolstering ties with Tehran.

In mid-August, Pompeo said that the UN Security Council had rejected a US resolution to extend the Iran arms embargo, noting that, despite the decision, the Trump administration will continue to do everything possible to ensure that Iran is not able to buy and sell weapons.

In June, Iranian Foreign Ministry spokesman Abbas Mousavi indicated Tehran’s readiness to go ahead with its oil shipments to Venezuela if “Caracas demands more [such] supplies from Iran”, which is practicing “its free trade rights with” the South American country. The statement was preceded in May by five Iranian tankers delivering more than a million barrels of oil to Venezuela, which was hit by a serious fuel shortage caused by US sanctions.

The statement came after Pompeo announced on Saturday that all UN sanctions against Iran were “back in effect” under the “snapback” mechanism of UN Security Council Resolution 2231. The mechanism envisages an array of punitive measures if Iran violates its obligations under the 2015 nuclear deal, also known as the Joint Comprehensive Plan of Action (JCPOA).

Referring to the JCPOA, EU High Representative for Foreign Affairs Josep Borrell, in turn, stressed that the US has no right to unilaterally restore international sanctions on Iran on the basis of an agreement it has withdrawn from.

Iran’s President Hassan Rouhani, for his part, said in a televised speech on Sunday that the US is facing defeat in its recent sanctions decision against the Islamic Republic.

He also signalled Tehran’s readiness to fully adhere to the 2015 Iran nuclear deal, if all other signatories do so.

In May 2018, the US re-imposed crippling sanctions on Iran as part of President Donald Trump’s campaign of so-called maximum pressure on the Islamic Republic, which began after Washington unilaterally withdrew from the JCPOA in May 2018, a move that prompted Tehran to start suspending its JCPOA obligations exactly a year later.