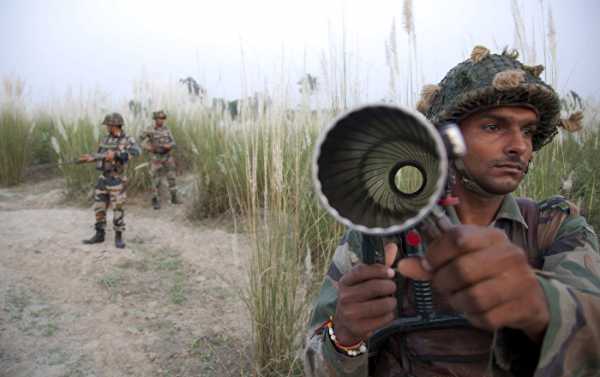 The fragile peace between nuclear powers India and Pakistan that has been continuously tested over the past few years has begun to break down, as both nations reported record number of ceasefire violations across the heavily militarized border that splits the disputed region of Jammu and Kashmir.

Jammu and Kashmir is Muslim-majority region whose populace was split over joining India, Pakistan, or declaring independence during the partitioning of India. The region was the site of the 1947 war between India and Pakistan that left the region split between India (which controls the lion’s share of the land and populace), Pakistan and China, which controls a small amount of the former princedom known as Aksai Chin along their southwestern border.

Separating the Indian and Pakistani sides of the region is the 482-mile Line of Control (LoC), the most heavily guarded border in the world, with hundreds of thousands of troops standing at the ready at both sides armed with rifles, machine guns, mortar platforms and artillery.

After a military standoff that threatened to send both nations spiraling into nuclear war from 2001 to 2002, the leadership of the two nations agreed to an unwritten de-escalation peace. That peace then fell apart entirely in 2013 when a series of armed skirmishes broke out throughout the year.

Since then, the Line of Control has been the epicenter of a shadow war between the two nations, with soldiers from both sides continuously crossing the border to strike at enemy positions and villages. The worst of these strikes came in late 2016, when India responded to a Pakistani special forces strike on one of their positions by launching airstrikes against Pakistani positions. Islamabad returned fire, and hundreds of casualties were reported before the hostilities died down.

They added that militant groups based on the Indian side of the LoC also cross the border to receive arms and training from the Pakistani military. Indian Army Chief Bipin Rawat admitted in a statement that India did sometimes violate the ceasefire, but only to strike at Pakistani military posts that support militant infiltration.

“Earlier, we were targeting only infiltrating militants [on the LoC]. But these extremists are disposable commodities for Pakistan. Instead, the pain has to be felt by the Pakistan armed forces for supporting infiltration. So we have started targeting [Pakistani] posts and I can assure you that, in these exchanges of fire, [Pakistan] has suffered three-four times the casualties. That is why we get repeated requests from Pakistan to take the ceasefire back to 2003 levels,” he told reporters.

The Pakistan Defense Ministry fired back that India violated the ceasefire 1,900 times in 2017, and has done so 75 times this month alone.

As the only independent observer of the LoC is the United Nations Military Observer Group in India and Pakistan (UNMOGIP), which only makes occasional and announced visits to the LoC, it is difficult, if not impossible, to verify any claims of ceasefire violations by either country.

At present, no discussions to de-escalate the worsening situation are happening. Pakistan invited India to an in-person meeting of their respective directors general of military operations (DGMO), but New Delhi refused.

Politics in New Delhi have shifted towards right-wing Indian nationalism with the election of Prime Minister Narendra Modi in 2014, who has taken a hardline stance against India’s traditional rivals. Relations with China have also declined, as the stand-off between India and China in the Doklam plateau of the summer of 2017 evidenced.