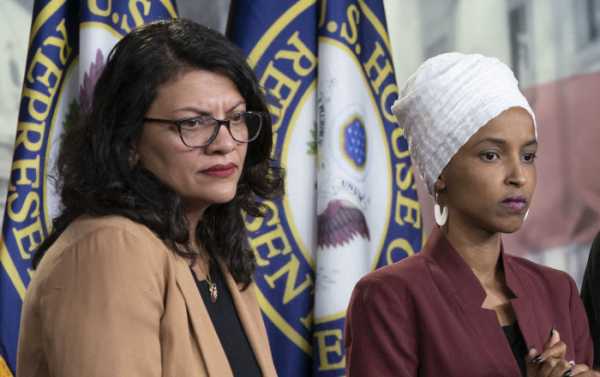 The US president complained after the Democratic lawmakers proposed taking action against Israel.

On Thursday, Tel Aviv said that Tlaib and Omar, due to visit the country next week, had now been barred from entry due to their support for the Palestinian-led Boycott, Divestment and Sanctions (BDS) movement.

Israeli Interior Minister Aryeh Deri later satisfied a request made by Tlaib to allow her entry on humanitarian grounds, so that she would be able to visit her grandmother, who lives in the West Bank.

However, the access was contingent upon Tlaib’s agreement to not voice her political opinions about Israel and “respect the restrictions imposed on her” and promise “not to advance boycotts against Israel during her visit”.

Trump earlier suggested that Ocasio-Cortez was jealous of the media attention Tlaib and Ilhan were receiving in light of Israel’s ban.

“Like it or not, Like it or not, Tlaib and Omar are fast becoming the face of the Democrat Party. Cortez (AOC) is fuming, not happy about this!”, Trump tweeted.

Ocasio-Cortez, in turn, brushed off his tweet with a laughing emoji.

Ocasio-Cortez reacted to the news of the ban issued earlier by Israel against 2 Muslim congresswomen by tweeting that ‘MoC are frequently asked to visit Israel to “see things for ourselves.” But Netanyahu choosing to ban the only 2 Muslim women in Congress from entering tells the US that only *some* Americans are welcome to Israel, not all. Trump is exporting his bigotry & making matters worse.

Ocasio-Cortez retweeted the outrage against Israel’s decision expressed by many by other US politicians.

Earlier on Sunday, the World Jewish Congress (WJC) announced that it was deeply disturbed that Tlaib suggested a boycott of Bill Maher’s HBO show, improbably comparing the move to Nazi-era boycotts of Jewish-owned businesses.

Tlaib slammed Maher’s HBO show over his recent criticism of the BDS movement, calling the organization “a bulls*** purity test by people who want to appear woke but actually slept through history class”.