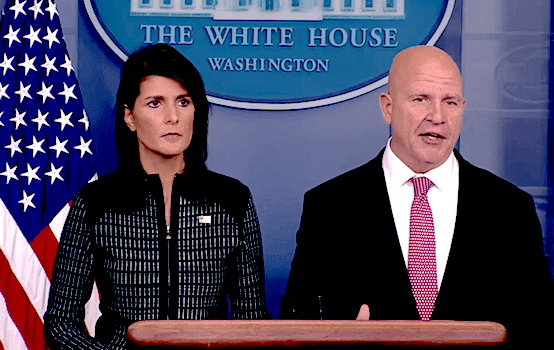 Over the last year critics have warned of the returning neoconservative influence on the executive branch’s national security apparatus, each day a little less confident that  President Donald Trump will keep to the seeming anti-interventionist impulses he  demonstrated during the 2016 campaign.

Of course the most garish of the pro-war set—Sebastian Gorka, K.T. McFarland, John Bolton—are easy to identify in or on the periphery of Trump’s orbit (in Gorka’s case, he was cast out of the White House, only to flak away in any media outlet that will pay attention). Meanwhile, elite neoconservative voices like Bill Kristol and Max Boot have become darlings of the “Never Trump” cadre, finding new life as conservative tokens on “Resistance” media like MSNBC.

What has been less obvious, but has become much clearer in these last few months, is that other neoconservatives are quietly filling the vacuum left by Obama’s cadre of liberal interventionists. Many of them had taken a pass on “Never Trumping” publicly, and are now popping up at the elbows of top cabinet officials.

Take Nadia Schadlow, for instance. Never heard of her? Unless you’ve been navigating the rice paddies of Washington’s post-9/11 national security enterprise for the last several years, there’s no reason you would have. But she has been at the National Security Council since last winter, and is set to replace Dina Powell as deputy national security advisor, at the right hand of NSC chief H.R. McMaster. She was also the lead on the White House National Security Strategy, released last month.

This was Schadlow’s first recent position in government.* Sources place her in the early-1990’s at the Office of the Under Secretary of Defense for Policy in the Eastern Europe, Eurasia and Russia section.  Her résumé includes doctoral degrees from Johns Hopkins Nitze School of Advanced International Studies (SAIS) under the tutelage of vocal Never Trumper and Iraq war promoter Eliot Cohen, who runs the largely neoconservative Strategic Studies program there, and whose last book, The Big Stick: The Limits of Soft Power, argued that the U.S., backed by a more robust military, must be the “guardian of a stable world order.” In that vein, Schadlow published a book last year, War and the Art of Governance, that extols the virtues of long-term military intervention for “achieving sustainable political outcomes,” requiring “the consolidation of combat gains through the establishment of stable environments.” Schadlow has repeated this for years as a mantra for reordering military strategy in the wake of the disastrous wars she and her contemporaries helped sustain, in Iraq, Libya, and elsewhere. Call it nation-building by another name. 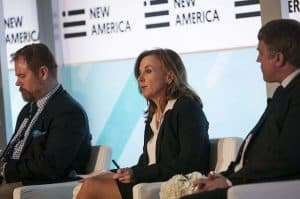 Nadia Schadlow (center) at New America Foundation panel on “Hezbollah, Ukrainian Rebels, and ISIS: Are Hybrid Superguerrillas the Future of War?” in 2016.

In a 2012 Weekly Standard commentary, she criticized the Obama administration for saying “the tide of war is receding,” and exclaimed “the line of thinking that now pervades the Pentagon avoids recognizing that combat and the restoration of political order go hand and hand.” While she gives a nod to “civil-military operational planning and execution,” she never utters the words “State Department.” No surprise there, either, since her neocon friends were responsible for the long slide of Foggy Bottom’s resources and influence in favor of military leadership, beginning with the “political reconciliation” and reconstruction of Iraq, and then Afghanistan.

What is significant about Schadlow’s role in the White House—she’s reportedly a “trusted confidant” of General McMaster, who was lionized in the New Yorker for his T.E. Lawrence approach to counterinsurgency in Tal Afar in 2006—is not her bibliography, but her vast connections to Washington’s foreign policy and national security clique, especially its neoconservative elite. If one were using the metaphor of chain migration, she would have plenty of friends on either side of the Potomac to tap for high-level placement, consulting, and advice.

Why? As recent senior program director for the expansive, multi-million dollar International Security and Foreign Policy Program under the Smith Richardson Foundation, she has helped to fund and facilitate countless authors, conferences, think tanks, and university programs since 9/11, most of which hew to the doctrine of sustained military intervention towards the goal of U.S. global power and influence. That includes preemptive war strategy, counterinsurgency, democracy promotion, and the continued push for bigger military budgets and solutions to regional conflicts in the Middle East and Ukraine. If there was a prominent player in the U.S. security community over the last 20 years, you can bet Schadlow and Smith Richardson were more often than not connected to him.

But it goes back so much further than that. The foundation has a rich history cleaved to neoconservative pioneers such as Irving Kristol, father of Bill, who in his own memoirs credits the philanthropic institution and its then-director Randall Richardson (heir to the Vicks fortune) with helping him jumpstart the Public Interest, known as the premier neoconservative organ, a label Irving fully embraced. The foundation also served as a key backer of Commentary magazine after Norman Podhoretz took the helm in 1960.

It is in international affairs that Smith Richardson has made some of its biggest impacts, during the anti-communist Reagan era and into the Middle East conflicts under Presidents Clinton, Bushes, Obama, and Trump. To say the foundation was involved at every level in the lobbying for and crafting of the so-called global war on terror after 9/11 would be an understatement. Example: Former Smith Richardson research director Devon Gaffney Cross became a director of the Project for a New American Century, the intellectual vehicle that drove the removal of Saddam Hussein and shaped George W. Bush’s foreign policy. In 2000, Cross was listed as one of the participants in PNAC’s seminal treatise, “Rebuilding America’s Defenses: Strategy, Forces and Resources for a New Century.” The rest of the contributors are a who’s who of Washington’s war theocracy, most of whom have benefitted from Smith Richardson support.

Just as telling is Smith Richardson’s continued backing of the Institute for the Study of War, headed by Kimberly Kagan, wife of Frederick, with whom she was a “de facto advisor” to General Petraeus for a year as he set about his then-vaunted COIN strategy in Afghanistan. ISW, chaired by retired General Jack Keane, known as the “godfather of the surge,” was founded in part by the generosity of Smith Richardson in 2007. It not only promoted more troops, but an extended occupation in Afghanistan, regime change in Syria, and ongoing hostilities with Iran. No surprise, then, that ISW has numerous intertwining relationships with the military and the defense industry. It received $895,000 for program work from Smith Richardson between 2014 and 2016 alone.

The last one—CNAS—is more indicative of Smith Richardson’s broader strategy, in that it doesn’t only give to hardline neoconservative outfits like, say, the Foundation for the Defense of Democracies (which has received no less than $500,000 since 2014 and says it helped write Trump’s new Iran policy). On the contrary, Smith Richardson has been a major patron of the conventional establishment, too, even largely Democratic think tanks like CNAS, Brookings Institute, and the Carnegie Endowment—all of which invariably host scholars and programs that promote America’s military-driven global influence, counterinsurgency doctrine (CNAS was a virtual hothouse for COIN early in Obama’s presidency), and democracy promotion in places like Russia and Ukraine, a major yet failed project of humanitarian interventionists in the Obama administration.

No surprise, then, that the worldview of people like Nadia Schadlow is no different from the wider Washington policy orbit that has enjoyed a pipeline of patronage from her former employer. She is not only affiliated with the Foreign Policy Institute, but is a full member of the Council on Foreign Relations. When she was named to the NSC staff in March 2017, along with “Kremlinologist” and former Eurasian Foundation strategist Fiona Hill, national security establishment courtier Thomas Ricks called them both “well-educated, skeptical, and informed. In other words, the opposite of the president they serve.”

You know the “right” kind of operator has arrived in the White House when establishment commentariat like Ricks and Josh Rogin get all gushy about their calming, “soft power” influence over Trump, which sounds like a lot of bunk when you consider their well-documented points of view.

Simply put, after years of cross-pollination brought on by a slush fund of wealthy private donors like Smith Richardson and an even more eager defense industry, neoconservative views are no longer distinguishable from the sanctioned goals of the Washington policy establishment. They are all working, really, as proper stewards of the military-industrial complex, which is essential for advancing their (sometimes competing) visions of world power politics and American exceptionalism. There is little room for realism and restraint, as voiced by this magazine and other critics.

That is why there seemed to be such relief upon the recent release of the Trump administration’s National Security Strategy, with Washington scribblers lauding it as “well within the bipartisan mainstream of American foreign policy” and “a well crafted document that should reassure allies and partners.”

What it actually does is to reinforce Trump’s turn towards a harder line against Iran, as evidenced in McMaster’s recent speeches. Nikki Haley, ambassador to the UN, is threatening fellow members on the Security Council, and the Trump administration is seen as taking sides with Israel in the fragile Middle East peace process (or what’s left if it). Meanwhile, the White House has just given a green light to arming Ukraine against Russia.

Call it the new “adults in the room,” if you want, or peg it as the neoconservative influence that it is. Strikingly, Dan Drezner writes that the NSS is “Straussian” in that its “subtext matters at least as much as the text.” The preeminent scholar Leo Strauss is considered one of the key founders of the neoconservative movement, a fact the Washington Post columnist should be well aware of. Like most of the elites here in Washington, however, Drezner is trying to have it both ways—calling it neocon without have the guts to say it outright.

* Story has been updated to include additional information regarding Schadlow’s experience in the Pentagon.