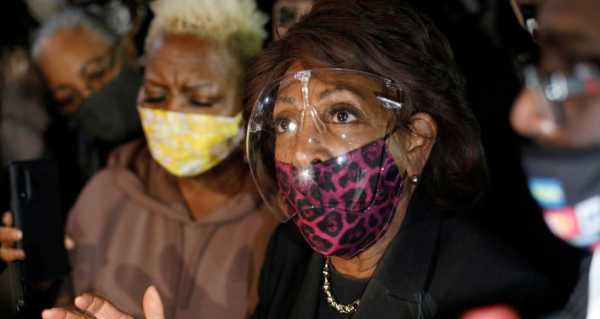 Despite her potentially inflammatory statements, Saturday’s protests in Brooklyn Center, Minnesota remained peaceful and dispersed without clashes with the police.

Democrat Congresswoman Maxine Waters visited Brooklyn Center last night, where BLM protests against police violence have been going on for a week following the fatal shooting of Daunte Wright by a law enforcement officer. During her brief visit and similarly brief conversation with media outlets, Waters managed to make a number of head-scratching statements:

After the House Democrat left the scene, around 150 people stayed in defiance of the curfew. However, unlike some of the previous nights, there were no clashes between the demonstrators and the police. The latter, in turn, refrained from using force to disperse the illegal meeting even as the protesters shouted insults directed against law enforcement personnel.

In the end, the BLM protesters dispersed on their own. Not all cities in the US have been as lucky in recent weeks. Many have faced major protests, sometimes descending into vandalism-sprees in the wake of several police shootings that have resulted in the deaths of African-Americans.

The killing of 20-year-old Daunte Wright became one of the latest triggers for the new spate of BLM demonstrations. Wright resisted arrest for an outstanding warrant in Brooklyn Center during a traffic stop and was shot by a police officer. The man managed to drive away, but eventually crashed his vehicle and succumbed to his wounds. Police officer Kimberly Potter said she had accidentally grabbed her handgun instead of her Taser, shooting Wright in the chest once. Potter has since been charged with second-degree manslaughter and faces up to 10 years in prison if found guilty.