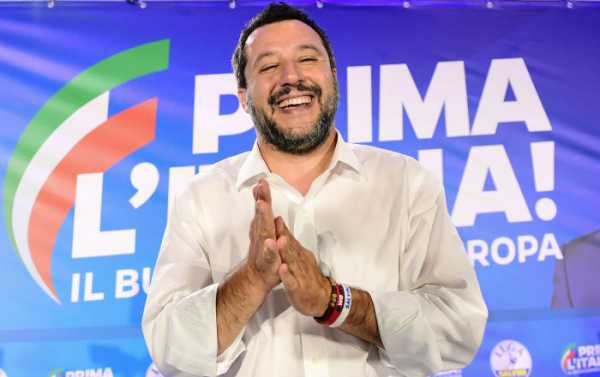 Italy’s Eurosceptic coalition government has proposed a heavy-spending budget as well as major tax cuts, which would increase the nation’s already-giant debt load. The European Union is now considering whether it should compel Italy to comply with its deficit and debt requirements by launching a disciplinary procedure.

In an interview with the Italian daily Corriere della Sera, Salvini said it was his “duty” to push forward the ambitious tax overhaul, one of its main campaign promises in 2018.

The leader of the co-governing League party advocates introducing a flat tax into next year’s budget (replacing the current progressive tax rates, which range between 23 and 43 percent), as well as reduce the burden for companies and families earning less than 50,000 euros ($56,000) PER year.

“If they don’t let me do it, I’ll say goodbye and leave,” Salvini said.

This step, which he says is the only way to spur Italy’s near-zero economic growth, is expected to result in at least 10 billion in lost revenue for government coffers.

This is three times less than the cost he announced last month.

“Thirty billion euros, this is the proposal studied by the League’s economist, documented cent by cent, that we are ready to take to the cabinet and parliament,” Salvini said in late May as he unveiled his plan.

Brussels has long warned Italy against slashing taxes, which inevitably widens A budget deficit if public spending remains at the same level.

European regulators say Italy cannot afford these ambitious spending plans, arguing that they will only add to Italy’s sizeable debt, which stood at 132 percent of GDP last year (more than twice the EU’s 60-per cent cap).

The European Commission said in a 5 June report that Italy had made little progress in addressing its recommendations (such as reducing old-age pensions), and that further anti-austerity measures “may negatively affect Italy’s growth potential”.

The report did not quell the concerns of Brussels decision-makers, and the EU is mulling disciplinary action, called the excessive deficit procedure, in a bid to bring Italy into compliance with its debt requirements. The Commission’s outgoing president Jean-Claude Juncker said it could stretch into the next few years.

The procedure could be launched in early July, exposing Italy to the risk of multi-billion euro fines.

Italian Prime Minister Giuseppe Conte said Italy was determined to avert painful sanctions, but did not elaborate on the matter.

“We have to avert it,” Conte told reporters on Friday in Brussels, where he is attending a EU summit. “It’s a difficult situation but I’m confident of a positive solution.”