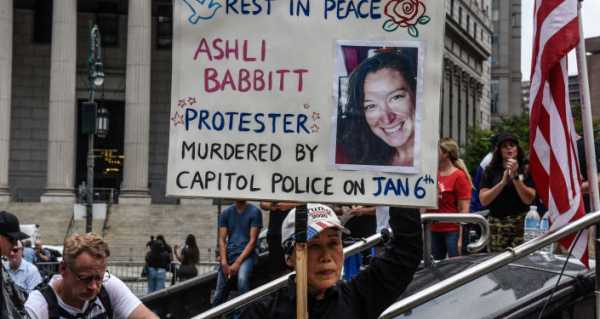 The Capitol Police officer who shot and killed unarmed protester Ashli Babbit revealed his identity on 26 August in an exclusive interview with NBC News. While Michael Byrd insists that he saved countless lives on 6 January, Babbitt’s family is reportedly preparing a civil lawsuit against him and the US Capitol Police.

Police Lieutenant Michael Byrd, a 28-year-old African American veteran of the US Capitol Police Department (USCP), came forward on Thursday as the officer who fatally shot Ashli Babbitt on 6 January 2021 when she was climbing through a broken part of a door in a hallway of the US Capitol. Byrd’s identity had been concealed for more than seven months by the USCP and federal government officials.

Byrd revealed that during the protest he had been informed on police radio of shots fired in the Capitol building, which made him believe that the situation was spiralling out of control. However, he admitted that he had later learned that the shots fired update had not been true.

​According to the officer, at some point he found himself “essentially trapped” with lawmakers without any way out: the doorway was barricaded with furniture to stop the protesters. When the crowd approached the barricade and he saw a person (later identified as Babbitt) climbing through a broken windowpane into the Speaker’s Lobby, he decided to shoot. Byrd insisted that he was unaware of the fact that Babbitt was unarmed. He also didn’t know how many people were on the other side of the barricade and if there were any officers there, according to his account of events.

​In April, the US Department of Justice signalled that it would not pursue charges against Byrd. Earlier this week, the US Capitol Police also announced that USCP’s Office of Professional Responsibility (OPR) determined that he acted lawfully and “within Department policy.”

​Byrd’s Thursday interview has prompted a debate on why the officer remained anonymous for seven months. Zenger News specifically asked Byrd’s lawyer, Mark Schamel, whether his client’s decision to come forward was an indication that fears for his safety were unfounded. “Not in any way, shape, or form,” responded Schamel, later adding that his client is “a hero…[who] justifiably used force to protect members of Congress from an imminent threat posed by violent rioters.”

​Meanwhile, Maryland attorney Terry Roberts, the Babbitt family’s lawyer, suggested that Byrd’s race was “clearly a factor” in the government’s decision to conceal the officer’s identity amid simmering political and racial divide haunting the country since the 2020 Black Lives Matter riots and 6 January incident in DC.

​Roberts also told the media outlet that Byrd has a record of mishandling firearms, including once leaving a loaded pistol in a congressional visitor centre bathroom. The lawyer argues that Byrd’s decision to fire a shot at Babbitt proves his unfitness for duty.

The family of Babbitt, a decorated US Air Force veteran, is planning to file a civil suit against Michael Byrd and the US Capitol Police and is currently crowdfunding their legal effort, according to Zenger. Roberts believes that Byrd had no reason to believe the unarmed protester posed a threat to him or others, especially given that Babbitt was the only person killed by gunfire in the Capitol on 6 January. In addition, it appears from footage that Babbitt may not have seen the officer before he fired at her.

It also remains unclear if Byrd warned Babbitt before he fired: according to the media outlet, Byrd is not heard of issuing a warning on publicly available videos of the incident. Earlier this year, some legal observers suggested that the Capitol Police officer resorted to excessive force when shooting and killing Babbitt. They specifically cited the fact that she was shot when she was climbing through the door and not attacking anyone. According to the legal observers, the Justice Department documents do not contain evidence indicating that Byrd issued a verbal warning to the protester or made other efforts to subdue her before resorting to the use of deadly force.